There are a few of us in the Game on Aus community that have been playing games together since we were kids. My favourite genre of games, and where some of our fondest gaming memories come from, is Massively Multiplayer Online Role-Playing Games. Richard Garriott, the creator of the Ultima series of single-player RPGs, originally penned the term MMORPG. We are going to take you down our memory lane as we explore our origins playing MMORPGs from the late 90’s through to today in a multi-part series over the next few weeks. In this part 1, you will read about my first experiences in Ultima Online and see why I still play this game today, 20 years later. 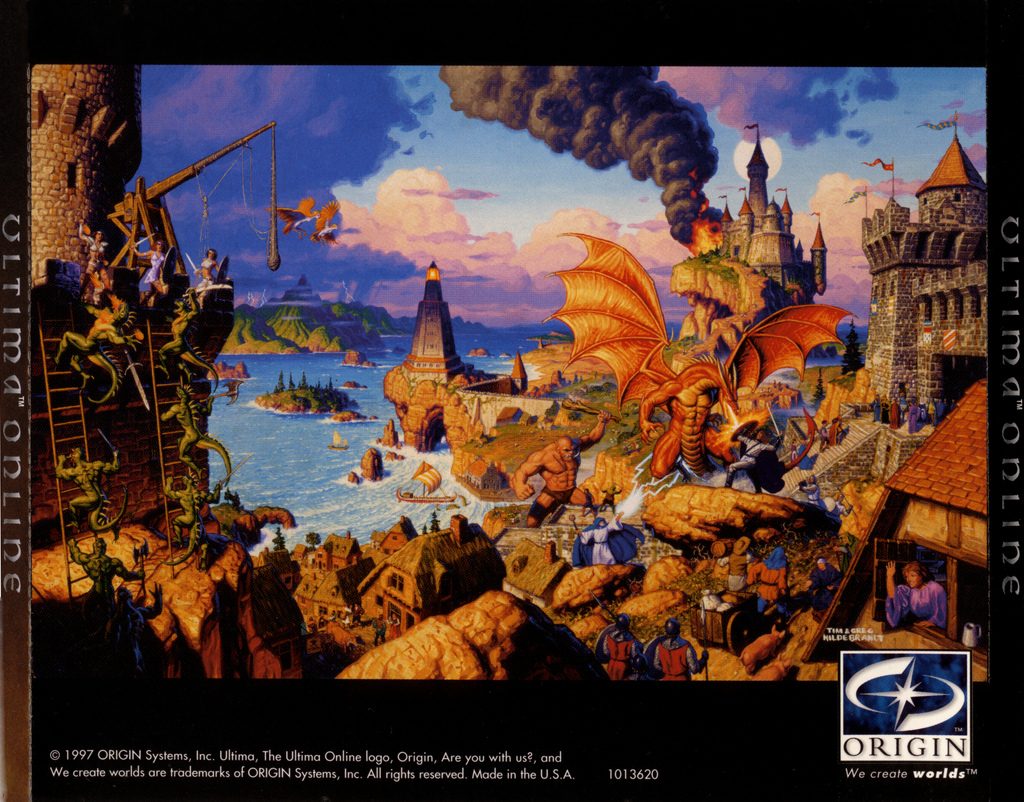 A phrase that was thrown around in the late 90’s was ‘the big three’ which referred to Ultima Online, Everquest and Asheron’s Call. These games were the pioneers, or grandfathers of MMORPG’s and they laid the foundations of game mechanics in the MMO’s we play today. Ultima Online was released in September 1997, developed by Origin Systems Incorporated and is credited with popularising the MMORPG genre. It featured isometric graphics and was set in the already popular Ultima universe. It was also a more involved, complex game than the previous eight single-player games in the series. GOA community member Grant “Gruntels” Lehmann remembers the discussions we had before playing the game.

“I remember playing Ultima VII and VIII and imagining what it would be like if the npcs (non-player characters) in the game were real players. The storyline/plot for these games was really engaging and Ultima Online was just something unfathomable at the time.”

We were at high school in year 11. One of our others mates Adam “Gerkin” Grootveld had been lucky enough to play in the beta test and he was trying to describe what it was like playing in the same game with other players. He was able to chat to them, kill monsters as a team and trade items with them. We just couldn’t get our heads around what he was describing as we had not experienced anything like that in an RPG before.

Sure, we had played multiplayer in FPS games like Quake and RTS games like Starcraft, but never in an RPG. The only multiplayer in an RPG we knew was sitting next to each other telling each other what to do next and asking how many deaths it will be until it was my turn to play. We were intrigued about how we could play together in the Ultima universe.

Grant explained, “it was a completely abstract concept at the time and had an almost ‘magic’ about how it all worked from a technology point of view for most of us.”

To play on the official Origin Systems Incorporated (OSI) game servers in America, you had to purchase the game and then pay a monthly subscription fee. From memory I think the monthly fee was ~US$10. With the purchase of the game came 30 days of subscription for free, so you could trial playing the game before subscribing. However back then we only had 56K dialup modems and as 16-year-old teenagers we didn’t have credit cards, or money in general (except to buy lollies for 10 cents each, YES!).

Enter another mate of ours, Brad “HellSpawn” Cleaver, who had discovered an online community in chat program mIRC that had set up its own version of the game but for free. This Perth-based group had utilised a reverse engineered emulator for the game called TUS (The Ultimate Server)and were running their own shard (server) in Australia called Mystic Peaks. We were able to make an account and play on it for free. How were they able to effectively run an alternate version of a subscription-based game without a legal battle? We didn’t know, but we didn’t care as we were able to play free!

I remember this first day in Ultima Online vividly, and the video above instantly hits me with a wave of nostalgia every time I hear that music. Picture this – There are three of us, Grant, Brad and I in the study of my childhood home in Leeming, Western Australia. We’re crowded around my computer and Brad is guiding us through the creation of a character. I created a human male character and we were able to choose the spread of attribute points between Strength, Dexterity and Intelligence, and could choose three skills. 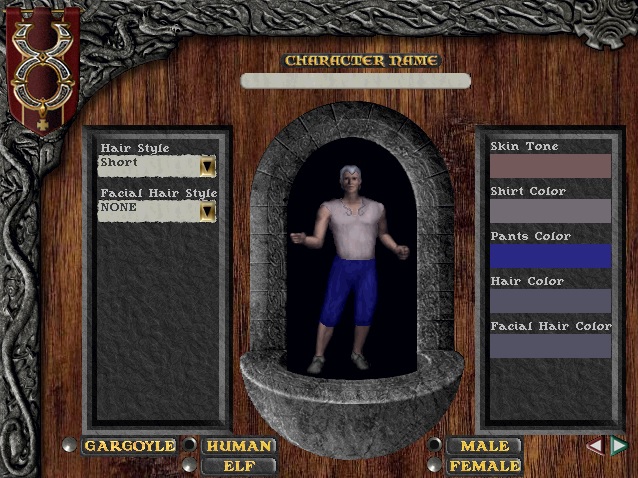 Once you finish customising your character, you must choose a starting location in the world and begin your journey. Brad tells us to start in thee town of Britain, so we spawned into the shard and started inside an inn. Brad instructed us the basics of movement by holding down the right mouse button and moving the cursor away from the avatar (player character) to walk or run in that direction. You double-clicked doors and to interact with npc vendors you had to type commands such as ‘buy’ and ‘sell’. He also showed us how to open our backpack and equip our starting items. 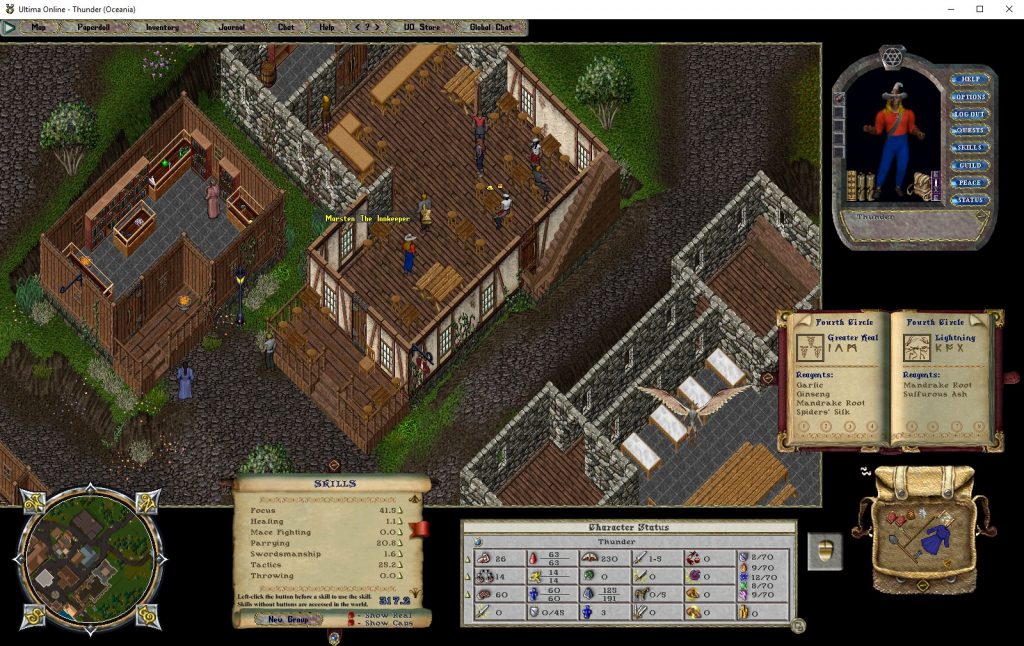 After learning the basics, we asked Brad, “so, what do we do now?” In previous single player RPGs there’s a storyline and quests however, there was none of that in this game. Brad laughed and said, “this is a choose-your-own-adventure game, so what do you want to do?” I shrugged and said, “I don’t know, kill things maybe?” So, he showed us the way to the nearby Britain Graveyard and pointed at a skeleton. We entered war mode (ctrl-c) which changed the stance of our character, turning our cursor red , indicating we could attack and then started hitting the skeleton with our sword. We managed to kill the skeleton and Brad told us to double-click the skeleton’s corpse to see if there was any loot. We found some gold coins and some bone armour leggings, which we equipped and it increased our armour rating. 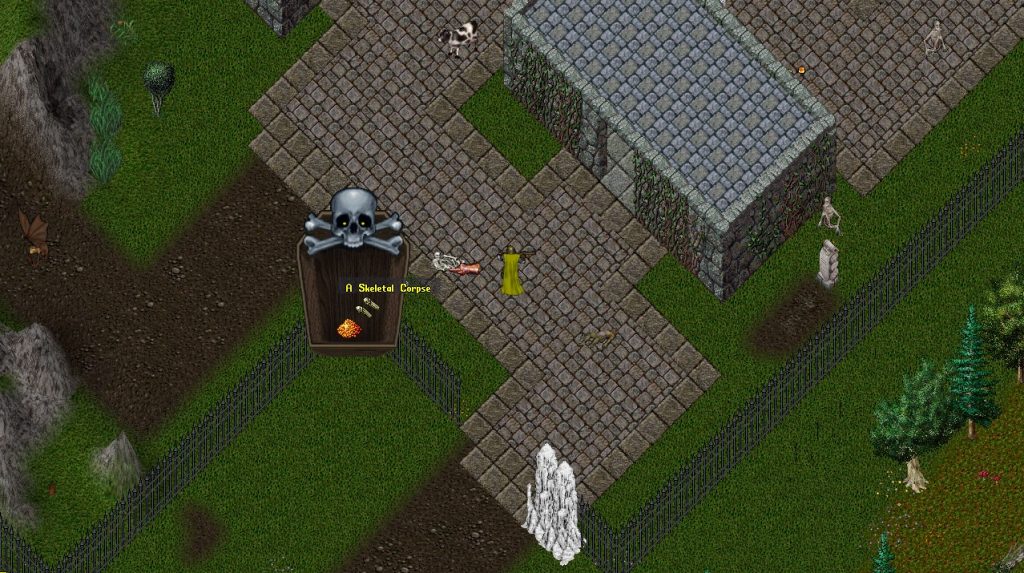 We killed another skeleton and a zombie and looted more gold, a bone helmet and a shield. This was cool! We noticed in the corner of the screen the words, ‘Por ort grav’, then heard the sound of a lightning bolt and next thing, the screen went black. We thought the game had crashed, and then three words came onto the screen – ‘You are dead.’ Brad burst into laughter. 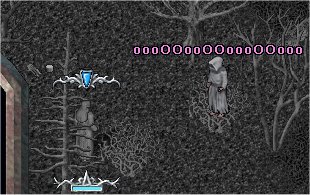 Grant and I were both like, “what just happened?” Brad explained between laughs, ‘Por ort grav’ are the words chanted when casting the lighting bolt spell. The game screen went into grayscale and our character was now a ghost. We also noticed a character had run up to our body. This was another player named ‘Khartoum’ and he was wearing dear antlers as a helmet. Brad, still laughing, said we had just met our first pk’er (player killer) and he was looting all our items! Sonuvabitch! We tried typing in how we felt about this predicament, however as we were a ghost our rather colourful words were converted to ooOOOooOOoO as ghosts can’t speak to the living.

As a ghost, we had to run back to the town and find the healer building who resurrected us once we entered. We then had to run all the way back to our body wearing only a loincloth. When you die, every item you are holding at the time drops on your corpse, including the clothes on your back, much like when we killed the skeleton earlier. Any player in the area can loot your corpse of items, though this flags them as a criminal meaning they turn grey and lose karma. Grey players can be freely attacked by other players and cannot enter guarded areas such as major cities, otherwise the guards get summoned and instantly kill them. The graveyard is outside the town boundaries and therefore is unguarded and fair game for any player to kill other players. We had just been introduced to player versus player combat (PvP), thus the beginning of many years of shenanigans in this amazing game.

Ultima Online uses a skill-based system. There are no player levels and you don’t earn experience. You must use relevant skills to gain proficiency in them. If you want to raise your swordsmanship skill, you had to kill things with your sword. If you want to learn how to parry, you had to fight monsters with a shield. It wasn’t enough just to hold the shield and kill easy things, you had to be hit and parry the blow. You can get npcs to train you in the skills they had available, for a fee. For example, for 300gp (gold pieces), you could train in the healing skill up to 30 (out of 100). The higher your skill, the more success chance you have using that skill.

You can do pretty much anything in Ultima Online. See those trees? You can chop them for wood. See some stone in the ground, you can use a pickaxe to mine for ore. You can even go fishing, catch fish, cut the fish using a dagger to get raw fish, cook the raw fish on a fire to make edible fish, and that edible fish will restore your hunger. You can tailor your own clothes, smelt your own armour and weapons, and even tame animals to aid you in battle, with some animals able to be used as mounts. Taming took too long, so we just bought our horses for 502gp from the local veterinary. This is where our faithful horse companions Thunder, Gus and Pickle came to be! 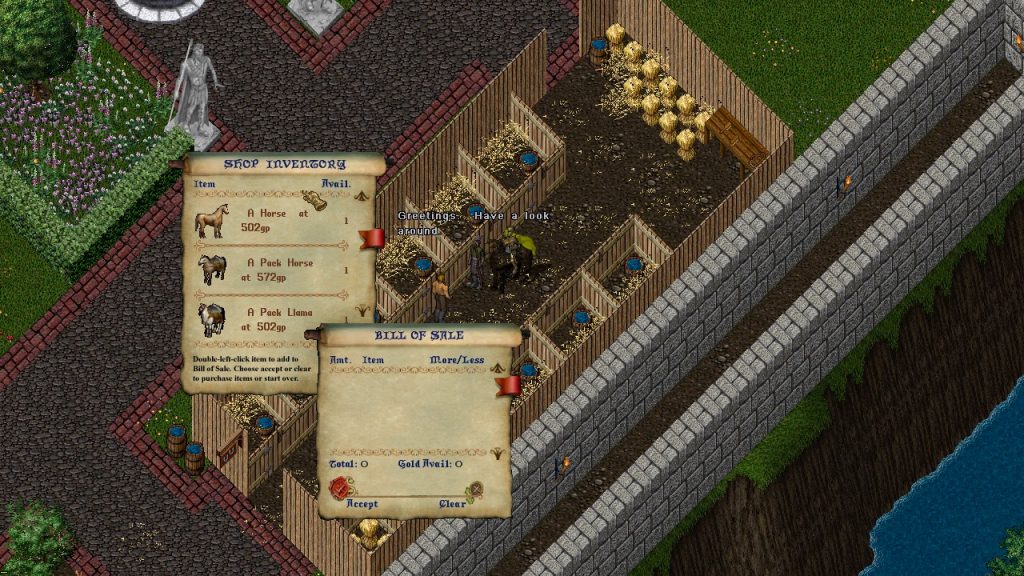 There have been 11 expansions added to the game over time, however there has never been a sequel game released. Ultima Online 2 was announced in 1999 with an unknown release date, however it  was cancelled by Electronic Arts in March 2001, as they had decided that the market was becoming saturated and that it would be more profitable to divert resources to the original Ultima Online. Ultima X Odyssey was another MMO planned for release in 2004. Whilst planned to be an MMO, it was also to be the 10th game in the Ultima series, but again our hearts were shattered when this was also cancelled by EA. 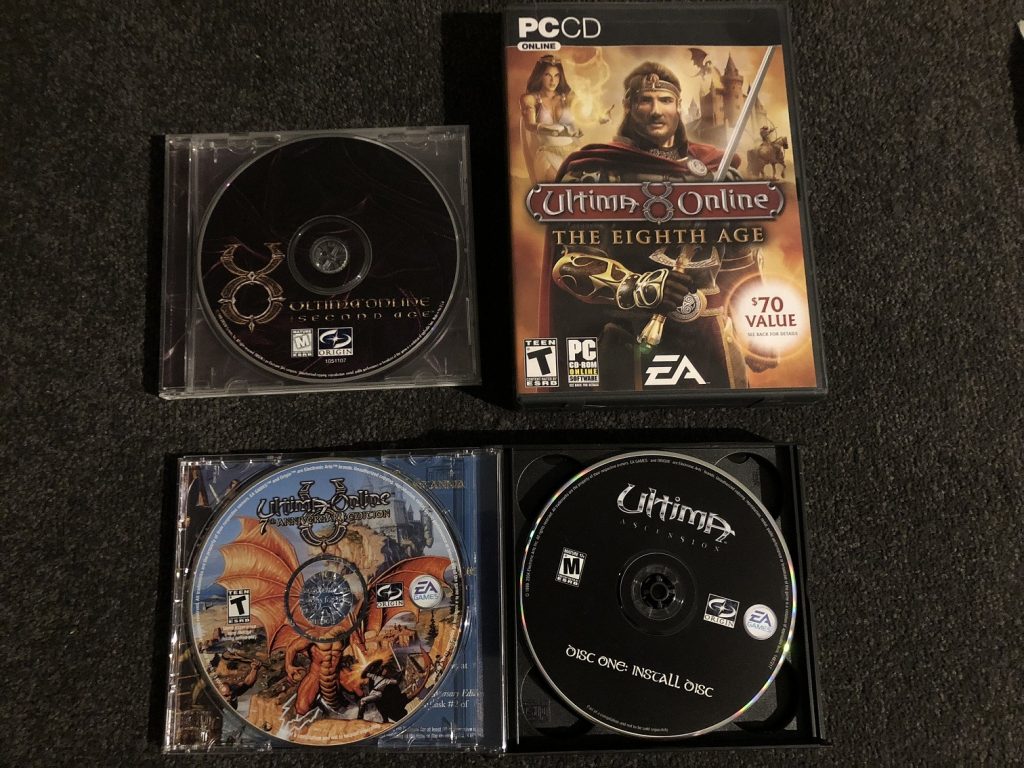 To this day after 20 years, Grant and I still log back in every winter almost ritually when the cold weather comes around, getting our nostalgia hit either in a free server we have found or on the proper UO servers. Prior to 2018, UO still had a monthly subscription fee, so it’s amazing that after two decades there are still enough players paying monthly for the game to continually receive updates and support. However this year, Ultima Online: Endless Journey was released and is a way for players to experience the core features of UO without a paid subscription.

The game engine has received some slight improvements over the years, and most recently with an Enhanced Client. For Grant and I, the Enhanced Client was a huge welcome visual upgrade. For those that were fans of the original Ultima series of games and somehow missed UO, they may enjoy the nostalgia as much as we do. However if a player has never played UO before, they may feel it’s too old and clunky to even give it a go now, and that’s completely understandable given the graphics and gameplay of modern MMOs.