A story heavy in complexity and depth is sometimes difficult to execute through a singular method of story telling. Instead it may require presentation through multiple mediums, several points-of-view or extra research and revision of events on the viewers part. Only then do the pieces come together to paint a complete picture. The use of similar methods to tell the story of 13 Sentinels: Aegis Rim created a memorable story-telling experience. Along with stunning visuals and multi-genre gameplay, I was taken on a journey where there’s a lot more than meets the eye.

Developed by Vanillaware, 13 Sentinels: Aegis Rim (pronounced “Ee-jus”) first caught my interest with its involvement of giant mech warriors and the battles they partake in. I’m a huge sucker for sci-fi video games that have anything to do with fighting, upgrading and controlling battle mechs. I can’t explain what attracts me to this particular genre but obviously it didn’t take much for the developers to reel me in.

Our story starts off with giant war machines called the Kaiju invading the streets of Ashitaba City. As scared residents flee for their lives, a young teen stands confidently in front of a giant yet friendlier robot. This machine and multiple others of its kind called Sentinals are here to help fight the war against these dangerous machines. While the origin of these invaders are unknown, the sentinels also house their own mystery.

To tell the story about this war against the Kaiju, we’re temporarily pulled away from the action and told the stories of thirteen young individuals. While being connected to each other in one way or another, they also hold huge roles in the war at hand. And it’s their stories that will tell us the who’s, what’s, when’s, where’s and why’s. But it’s the way they’re told that made for a memorable experience.

13 Sentinels: Aegis Rim comes under more than just one genre, intertwining combat strategy with adventure. This I already knew prior to my playthrough. But after the initial introduction, I was surprised to see how Vanillaware executed this form of dual genre story telling. And It’s not entirely a linear experience, unlike what I was originally expecting. Dividing the game into different categories, (Destruction, Remembrance and Analysis) Vanillaware have created an interesting and creative way to tell their story.

Destruction is the combat component of 13 Sentinels: Aegis Rim. Through a mixture of tactical turn-based and real-time top down combat, Destruction plays out the war our main characters fight in against the Kaiju. However Vanillaware opted for a simpler way of execution. Instead of using fully rendered 3D models, they opted with using simple retro-inspired pixelated pawns. It kind of reminded me of the enemies seen in Space Invaders. Of course this makes it hard to visualize what’s actually happening as it sort of looks like you’re moving pieces around a board game. However it made good use of the imagination. Also from personal experience, the hoards of enemies did lead to some drops in frame-rate during the heavier onslaughts. I couldn’t imagine fully rendered 3D models trying to do the same whilst delivering the same technical performance.

Visual details aside, combat can go from controllable to overwhelming fast depending on the mission. Some fights can just feel like you’re repeatedly clearing out clusters of enemies section by section while others had me planning out my every move, also leading to a few failures. Strategy and Sentinel model choice are essential for victory. There are 13 Sentinels to choose for your 6-man strike team with different capabilities, each piloted by our 13 main characters. Through progression in both Destruction and Remembrance modes, these Sentinels and their attacks can be upgraded. When discovering the upgrades for Sentinels themselves, I was about to start nerding out in hopes for different part customizations and builds to be involved. Instead it’s just costly stat upgrades for armor, attacks, etc. 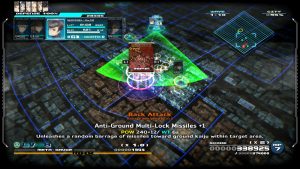 While the combat was enjoyable at times, it didn’t tell too much of a story. It created some lovely character interactions but it was Remembrance which really told the story behind the war and the characters themselves. It was also the mode that surprisingly lead me to love this game even more.

While the game’s main plot is about one particular event, our 13 main characters also have their own stories to tell. The battle against the Kaiju isn’t so straight forward and involves so many different layers. Through the points-of-view of our main characters, not only do we gain a better understanding of events but we also see everything that’s happening from every single angle and point in time. There were a lot of moments where we also find out more about certain connections people have to others or an event taking place in someone else’ story arc. This left me constantly gasping, wanting more and more of the story.

However, jumping from one persons story to another is semi-restrictive. While you get to choose whose story arc you want to play out next, there are certain events that are progress gated requiring you to reach a certain percentage of someone else’ story arc. This also applies to progressing through Destruction. While the story isn’t exactly linear, 13 Sentinels: Aegis Rim makes you follow certain paths before progressing through major moments. This didn’t leave me feeling mad, instead it allowed me to take breaks from certain stories/combat and lead/force me to progress through a story in particular I wasn’t as interested in.

While focusing on the war at hand, each story also contains plot points that aren’t Kaiju/Sentinel focused. There’s a heavy focus on character relationships too whether they be friendly or romantic. Some romances may even surprise you. Without spoiling anything it’s the inclusion of these particular characters/relations which gains extra brownie points from me.

Food is also a hot topic in the game. One story arc in particular lead me to Googling a Japanese dish I became quite intrigued in. It’s called Yakisoba Pan, a delicious sounding treat one of our main characters becomes very fond of throughout. It’s essentially a buttered hotdog bun with noodles inside and you bet I’m going to try making this dish in the very near future. I personally love a good noodle sandwich and this game has not only taught me that I’m not a weirdo but it’s a legit food item.

But the beauty in Remembrance’s execution isn’t in the way it tells a story or teaches us about foreign foods. It’s hand illustrated characters and environments are the real standout. Teamed with fully voiced dialogue available in Japanese and English to name a couple, I became so engrossed in the visual that I forgot for a moment that I was playing a video game. Instead, I thought I was watching an animated feature. With that said, 13 Sentinels: Aegis Rim is heavily story-based so be prepared for plenty of dialogue.

The majority of the conversations are used to unlock events in the game to progress via the Thought Cloud. I really liked this gameplay feature as it was used as a dialogue selector and a sort of inventory navigational system rolled into. It reminded me similar elements found in point-and-click adventure games but a lot cleaner.

With so much going on, it’s easy to forget about certain aspects of the story and why particular events are taking place. This is where the beauty of the third category comes in. Analysis is like a giant story book with everything that’s happened so far in the game. It’s easy to shrug of something like this as an index of sorts, which it is too. But being able to put all the pieces of the story together on a timeline helps with better understanding the story. Think of it as your second playthrough, but everything makes more sense.

13 Sentinels: Aegis Rim is easily the best story-driven game I’ve played in a long time. Vanillaware not only know how to tell a story but also do it in a way that’s both unique and memorable.