It’s hard to keep track of games I’ve played throughout the years. Here at Game On AUS, we do both a mid-year and end of year GOTY article. And whenever I’m asked “What game has been your favourite?” I’m usually left stumped. There are dozens of games I play annually for both pleasure and review. 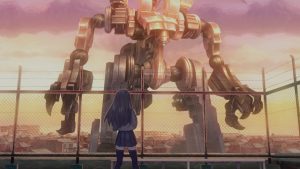 But there are always a few that stand out for one reason or another. My memories of 13 Sentinels: Aegis Rim, for example, have stuck with me ever since my review back in October, 2020. I believe I described it as “the best story-driven game I’ve played in a long time.” It was also where I learned that noodle sandwiches are a legitimate food item, called Yakisoba Pan. So you can say that it’s ticked more than one box for me. But I digress.

Almost 2 years later, this once Playstation “exclusive” has launched on the Nintendo Switch. Something I’ve been pretty excited for since hearing the announcement. And I obviously couldn’t pass up the opportunity to write about it once more.*

Now I wouldn’t say this game had a huge amount of replayability in the traditional sense. Instead, re-playing 13 Sentinels: Aegis Rim is kind of like picking up a good book you haven’t read in years. There’s something about your last read-through that makes you want to relive that experience all over again.

And like sitting down with a good book, I couldn’t start playing whenever or, in this case, wherever. To really settle into the story again, I wanted to be completely in the zone. 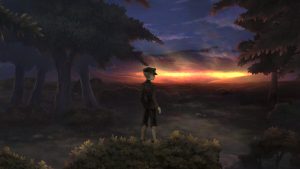 13 Sentinels: Aegis Rim is part story-driven narrative, part 2D adventure and part tactical combat. A normal day in Ashitaba City, Japan is quickly turned into chaos when machines known as Kaiju appear out of nowhere. Their origin is unknown, although some characters believe they’re weapons sent from the US. At the same time, large yet friendlier machines, called Sentinels, have also been summoned.

The question of who, what, when, where and why are answered as you unfold the stories of thirteen young individuals. This ensemble of main characters all have important roles in the war. Not only as Sentinel pilots, but also their involvement behind the scenes in the war at hand.

So what made me give this game such a high accolade? Well, it’s all in the way that its developer Vanillaware present a story. Multi-layered story telling, strategic combat, beautifully hand-drawn visuals and fully voice acted dialogue combine to tell an out of this world futuristic sci-fi story where nothing is as it seems. 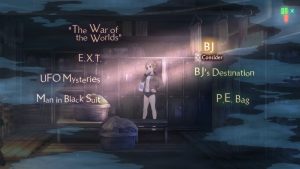 13 Sentinels: Aegis Rim is divided into three sections – Remembrance, Destruction and Analysis. Remembrance is where we get to know the main characters and learn about their involvement in the war. Sort of like a “choose-your-own adventure” without the possibility of a different outcome. It’s a non-linear way of telling the story as a whole, although character stories are progression locked to an extent.

This time I chose to progress through the story differently to my first playthrough. But I kind of regret it. During my first playthrough, I progressed through each character story at the same pace. But for my Switch playthrough, I gravitated towards characters I was more interested in. This really changed the overall pace, especially when I’d return to characters I’d yet started on. Not to mention plenty of exciting plot points had occurred already.

In my opinion, if you’re anything like me, I wouldn’t work through Remembrance like this. Although the game was designed in such a way, I preferred when everything felt like it was going at the same speed.

Remembrance also contains similar elements to a point-and-click adventure in the form of the “Thought Cloud” feature. This is used when gaining important objects, selecting dialogue or executing actions. The Thought Cloud is a simple and clean feature that’s never in the way of the HUD. Which, in my opinion, really helps maintain focus on the characters and the story.

But that’s if you aren’t already distracted by its stunning visuals. Sequences in Remembrance are a visual treat as it’s 100% hand drawn/painted. Character sprites also blend flawlessly as one with the environments. Like a picture book coming to life. Every single line of dialogue is also voice acted in both English and Japanese. Something you don’t see too often in video games of this genre. 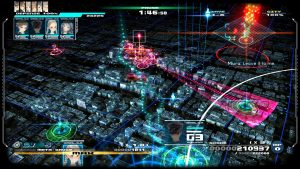 As you can tell, 13 Sentinels: Aegis Rim is a heavily story driven game. But its “Destruction” portion helps break things up for the player. Destruction is where Sentinels and Kaiju go into a battle in a top-down/dimetric, tactical combat battle.

This takes place across several “base defense” levels with a team of upgradeable Sentinels as your army. “Base defense” might sound repetitive, but each level delivers a different combat situation which you must adapt to. Sentinel choice is very important as battle can go from manageable to chaotic in a matter of minutes. Which can turn very messy if you’re not fully prepared.

Destruction is also visually simplistic with Sentinels and Kaiju presented as retro Atari era inspired sprites, ie. Space Invaders. City environments barely get in the way, so focus is solely on the war at hand.

I also feel I approached my second entry into the warzone a lot better than the first. Sentinel management was easier felt more efficient. And I didn’t stress as much in the combat’s heavier moments. Although that’s not to say I wouldn’t be eventually tested in later stages.

Both of these sections deliver so much character and story lore that it’s easy to either forget keypoints or need help connecting the dots. Believe me, I might have already known what happens at the end but I even forgot about a few bits and pieces. Because of this, the timeline of events and index is fully catalogued within the “Analysis” section. It’s incredibly handy for folks like me who need a regular refresher.

13 Sentinels: Aegis Rim is a flawless port to the Nintendo Switch in every aspect with zero loss in quality. And I’m happy that it’s allowed a larger audience to experience it. It’s a story full of enough twists to make you not want to put it down. Along with a good dose of action on the side.

*I think I wrote way more than my previous review.

Share. Facebook Twitter Pinterest LinkedIn Tumblr Email
Previous ArticleEp 238: Grab A Cold One From The XBOX Mini Fridge Will Ya?
Next Article Mophie Powerstation Go Rugged With Air Compressor: A must for gaming road trips