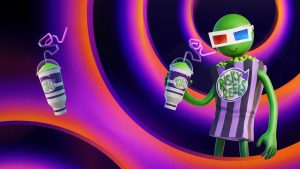 Beginning at 8AM AEST on October 29, Shortnitemares will feature seven animated short films shown back-to-back and repeated through until 8AM AEST on November 2. Shorts can either be watched in Picture-in-Picture Mode while playing Fortnite or in the specially created Shortnitemares Theatre/individually themed virtual rooms for group viewings, built by Quantum Builds.

Watching any of the seven shorts also comes with a cool perk. Players who watch at least half an hour’s worth of shorts in the Shortnitemares Theatre will get a Spray Matter Spray. There are other items also available to celebrate Shortnitemares in the Fortnite Item Shop, including the Kernal Poppy Outfit, Slurpy Slush’em Back Bling and Butter Buddy Emote.