I’m quite a fan of action-adventure games so it should be no surprise that XEL made it on my radar. It’s doing its best to be a Zelda-like game and you can definitely see the influence that the Nintendo staple has had on developers Tiny Roar. The trailer had pretty much everything I look for in a game. The combat looked fun, different power ups that had different status effects, and of course puzzles!

Looks can be deceiving

There’s a couple of things I noticed when I started XEL on the Nintendo Switch. Firstly it’s a pretty game. The environments and characters look very nice in their cartoonish style. The second is that the game is fully voice acted, a rarity in indie titles. 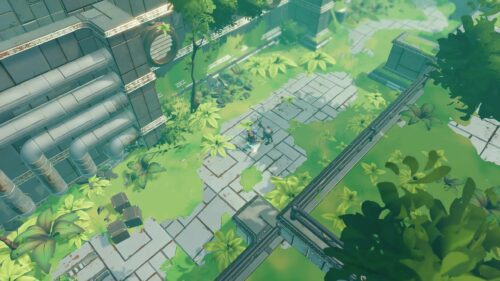 Unfortunately XEL’s shortcomings are also very apparent. From the opening cutscene you can see that the voice acting doesn’t match up with the characters’ mouth movements very well. It may not seem like such a big thing but it’s representative of the lack of polish from the portions of the game that I was able to play.

XEL’s story starts with the player character Reid crash landing on a strange world. She’s met by small robot that guides her through the introduction. Basic puzzles such as pushing boxes and pressing certain buttons to open paths lead you towards the sword and shield. Combat is quite interesting. It’s fun to lock on to enemies and use the dash to zip out of range of attacks. The shield is handy for blocking attacks but impacts to it reduces your stamina, which is also shared with your dash.

The pretty environments I mentioned earlier suffered when transitioning between areas. The early transitions just suddenly and jarringly change lighting and it doesn’t take long for these transitions to impact how zones load. It was quite common for me to move into areas and for half of the environment to not load in for a few seconds.

About thirty minutes into XEL I encountered the first boss. I was quite frustrated with how hard it was to dodge its first phase attack and when it moved to its second phase it felt like the outlines for the area of effect attacks wasn’t accurate. 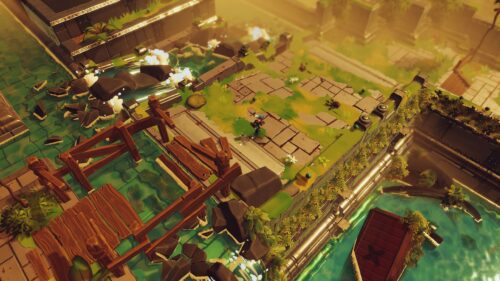 It was soon after that I encountered my first game breaking bug. I ended up on a fence and couldn’t get off so I loaded from the last save point. Somehow this broke the game. My save wouldn’t load and I had to start the game again. Unfortunate but games are complex and it happens sometimes. But then another lock happened about an hour into my second playthrough attempt of XEL. I was at a puzzle involving putting a battery into a switch but for some reason the switch wasn’t registering the battery. It was very disheartening.

All this is before mentioning encounters with NPCs. The fully voiced characters get cut off in cutscenes and character names don’t appear in subtitles even after they’ve introduced themselves. They also just randomly slide out of cutcenes.

I managed to press on and find my first gadget: the zap trap. It made the combat even more fun by allowing me to stun groups of enemies. The zap trap also featured in electric puzzles, an additional element to get the old grey matter thinking. 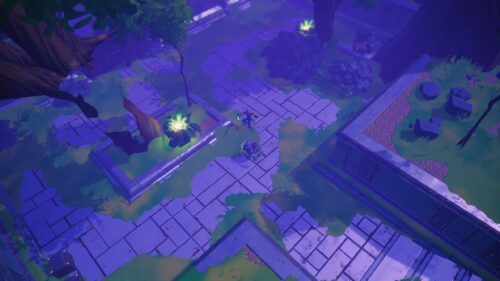 XEL features a time travel mechanic. In certain areas players can zip back in time. Sometimes this may be so the player can move an object in the past to prevent a bridge from collapsing. Sometimes it’s as simple as being able to get across a path that is blocked in the present day.

Unfortunately this doesn’t distract from the bug issues that XEL has. I played for over five hours and encountered game breaking bugs on five separate occasions, forcing me to restart the game. The last three restarts occurred because the cut scene leading into the second boss fight ends with me outside the battle arena. I can access all the areas I previously could but couldn’t get into the boss fight to progress.

What could have been

I feel bad unloading on XEL in this way, but the bugs really take away from any enjoyment I had. This is one game that could have done with some more time in development. Having put in five hours of play and having to go back to square one five times is, well it’s not ideal, and that’s an understatement. It’s a shame too because the trailer showed so much promise. XEL is a game that I very much enjoyed when I got into the puzzles and combat but ultimately the game has too many bugs in its current form. Hopefully a patch will be released to fix the issues I’ve encountered.

XEL is out now on PC, Xbox, Playstation and Nintendo Switch.