Logitech G, a brand of Logitech and leading innovator of gaming technologies and gear, has released the G502 X, and G502 X PLUS, the latest versions of the world’s most popular gaming mouse, with an array of breakthrough innovations for the best gaming experience possible.

The G502 X continues the legacy of delivering unrivaled gaming performance by meticulously redesigning the G502 form, and by updating it with the most advanced gaming technologies, including the introduction of LIGHTFORCE hybrid optical-mechanical switches.

“The G502 is an icon in gaming and we know that the community has been looking for the next-generation offering,” said Ujesh Desai, vice president and general manager of Logitech Gaming. “We reimagined the iconic G502 with design and engineering updates that elevate the legendary gaming mouse into a new era of play. With lighter materials and cutting-edge technology, the new G502 X promises to continue the G502 tradition of ultimate performance and total control.”

Exclusive to Logitech G, both G502 X models come with the all-new LIGHTFORCE hybrid optical-mechanical switches for incredible speed and reliability, as well as precise actuation with crisp response.

LIGHTFORCE is a revolutionary microswitch technology that combines the benefits of optical switches with the important actuation feel of mechanical switches that gamers love. Optical switches offer fast speed, performance and good reliability over the life of the mouse.

The G502 X touts a redesigned, reversible and removable DPI-shift button to accommodate a wide variety of hand sizes and grip styles, a redesigned scroll wheel with higher stability and reduced weight, while retaining the G502’s iconic dual hyper-fast infinite scroll and precise ratchet modes, USB-C charging for wireless versions, as well as a thin-wall exoskeleton for weight reduction and maximum rigidity.

Along with activity and performance without the wire and, when combined with LIGHTFORCE, features response times 68 percent faster than the previous generation. The LIGHTSPEED wireless protocol update also allows gamers to connect two LIGHTSPEED devices to one receiver using the Device Pairing Tool in G HUB.  Players can choose to operate G502 X with the same receiver as their Logitech G915, G915 TKL, or G715 gaming keyboards.

The G502 X PLUS model comes with LIGHTSYNC RGB with the following features, flowing 8-LED lighting that is customizable and adapts as the user plays, startup and power-down effects, and battery optimization through active play detection.

Both mice are available in black and white colorways.

The Logitech G502 X and G502 X PLUS gaming mice are expected to be available on LogitechG.com and at all major tech retailers from 20 September for suggested retail prices of $169.00 and 299.00 respectively.

Logitech G, a brand of Logitech International, is the global leader in PC and console gaming gear. Logitech G provides gamers of all levels with industry-leading keyboards, mice, headsets, mousepads and simulation products such as wheels and flight sticks – made possible through innovative design, advanced technologies and a deep passion for gaming. Founded in 1981, and headquartered in Lausanne, Switzerland, Logitech International is a Swiss public company listed on the SIX Swiss Exchange (LOGN) and on the Nasdaq Global Select Market (LOGI). Find Logitech G at logitechG.com, the company blog or @LogitechG.

Logitech and other Logitech marks are trademarks or registered trademarks of Logitech Europe S.A and/or its affiliates in the U.S. and other countries. All other trademarks are the property of their respective owners. For more information about Logitech and its products, visit the company’s website at logitech.com.

A review will be available shortly 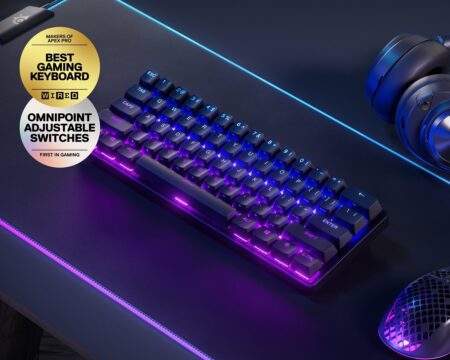