The Acer Predator Helios 300 is a solid all-round gaming laptop, with a distinct gaming aesthetic but sadly only a single USB-C port.

IT has been a really long time since I’ve been able to put one of Acer’s Predator gaming laptops through its paces, and I’m glad that situation has now been rectified in a positive way.

The Acer Predator Helios 300 is the 2022 update of the popular gaming model, and re-establishes itself as a solid all-round gaming laptop on the process.

The 15.6in screen was a 2560 x 1440 display with a 165hz refresh and 3ms response and the system was running Windows 11, with Norton 360 as the pre-installed trial internet security software.

The keyboard featured the obligatory per-key RGB lighting, and there’s also a Turbo button which effectively engages maximum power gaming mode. The rear of the panel also features a light-up Predator logo, just so everyone knows what sort of gaming laptop you’ve decided to buy.

Build quality was overall very good, except the finish attracted finger smudges easily, which detracted somewhat from the sleek vibe. 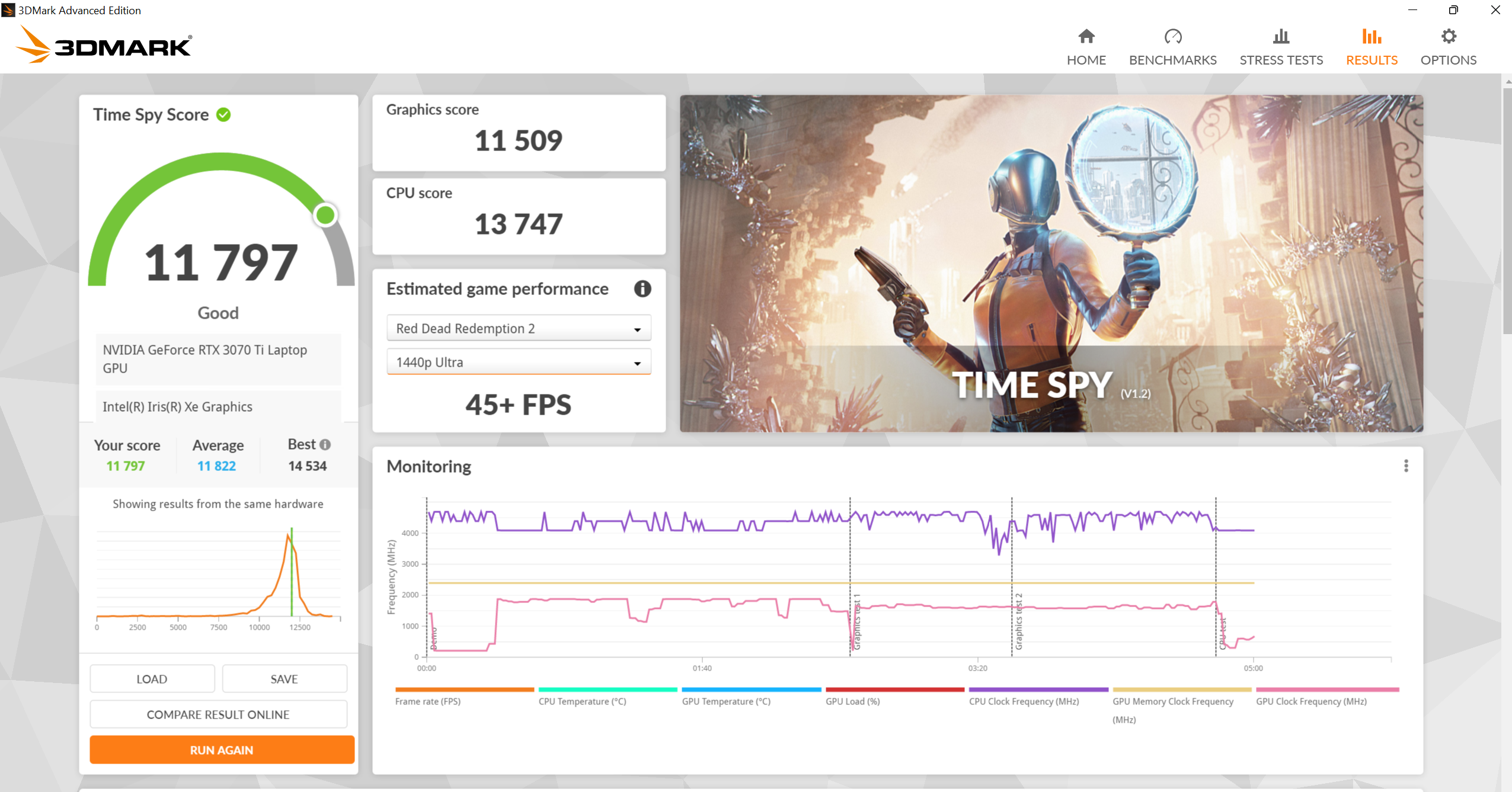 The 3D Mark results were similarly promising, returning a score of 11,797 on power and reiterating that this is indeed a gaming laptop.

The 165hz screen certainly helped with this; I didn’t have any problems with brightness or glare regardless of what environment I was using the laptop in.

The keyboard was responsive and well sized; I didn’t find myself inadvertently hitting the wrong key or not being able to reach the key I needed. It wasn’t too loud or clacky either, which I appreciated. The touchpad was also fine, but as with all laptops not ideal for fast-paced gaming; it was fine for general internet browsing and basic productivity tasks, however.

Battery life for general internet and streaming use was very good too – I got nearly six hours from a single charge, much of which was spent streaming video content and falling down Wikipedia rabbitholes etc.

On the gaming front, I got 90 minutes or so on battery, which is pretty much all you can expect from most modern gaming laptops – “don’t use this for gaming if you aren’t near a power point” has been a regular caveat in pretty much every gaming laptop review I can recall writing in recent years.

While the fans could get loud under heavy load I didn’t have any overheating issues, so the laptop’s cooling systems certainly appeared to be doing their job.

I was pleased the bloatware was kept to a minimum and was unintrusive – the obligatory customisation software is present, but never forced itself on me as a user, and while I’m not an enormous fan of Norton 360, it too did its job and generally stayed out of the way when I was gaming etc.

The only real issues I had with the system were pretty minor. Firstly, when you turn it on, the startup “Slicing blade” sound effect is really loud – even if you’ve got a headset plugged in. Not ideal for trying to fire the system up at night when the kids are asleep, for example.

The speakers themselves were pretty average, however – they were certainly functional, but lacked bass and the higher-end clarity I would have liked.

Lastly, I really would have liked some more USB ports, particularly USB-C. There’s only one (admittedly also a Thunderbolt port) but I’m increasingly seeing peripherals which are USB-C on both cable ends, and only having one USB-C port is not optimal. There are, however, three USB-A ports accompanying it, one of which has power-off charging capabilities.

The ports were rounded out by HDMI 2.1, Mini DisplayPort 1.4 (I would have preferred a full-size DisplayPort, but you can’t have everything) and an Ethernet port.

In pretty much every way, the Acer Predator Helios proved itself to be a respectable gaming machine. It played everything I wanted to run, I didn’t have any heat issues, the screen was good, the keyboard was responsive, and the overall experience was positive and issue-free

Indeed, the issues I have with the unit are fairly minor and generally relate to the speakers – an issue easily rectified by using a headset, which pretty much everyone does anyway – as well as the smudging of the chassis, which is an aesthetic thing rather than impacting the functionality of the system overall.

This is a solid offering from Acer and as long as you don’t mind leaning into the “Gamer” aesthetic fairly strongly, it represents a versatile laptop gaming system which is well worth considering.