“I was very impressed with the features of the AfterShock APEX-15R gaming laptop. From the mechanical RGB keyboard and 144Hz 1080p monitor, to the i7-8750H CPU and GeForce 1060 GPU. However, plugged in power was essential.”

The APEX-15R is a laptop made by AfterShock and is a very capable and powerful laptop for gaming, provided you can plug into power.

Ever since watching the 2006 movie “Grandma’s Boy”, I’ve always wanted to get my hands on a laptop that was powerful enough for gaming. The thing that held me back from purchasing one has always been the price tag as well as it not being as easy to upgrade individual components like you can with a PC. Sure, you can add more RAM and storage space to a laptop but outside of that, if the laptop was falling behind current games/technology, you were up for purchasing a whole new one.

Nowadays technology for laptops is just as good as desktop PCs and are becoming a lot more affordable. Having spent time playing some of 2018’s AAA titles on the AfterShock APEX-15R, I can say it runs far better than my current 2013-spec desktop PC. At the time of writing this article, the base model can be purchased for AUD1969 and considering the system specifications, is comparable on price to a similarly specced desktop purchase. It’s made me realise that I need to submit a budget request to the Chief Financial Officer (my wife, Heather). Let’s see what’s inside the box.

This laptop measures 359(L) x 240(W) x 19.9(H) mm and weighs 1.95kg including the battery, so it’s quite sleek in design. The metallic cover and palm rest areas are susceptible to fingerprint marks after each use, but these easily wipe off with a cloth. On the back are dual fan cooling vents. These vents share the temperature load of both the CPU and GPU, so I was looking forward to seeing how they handled graphically intensive games considering the APEX-15 has a Geforce 1060! This is the same GPU I have in my PC, crazy! Other I/O ports available on the exterior are: 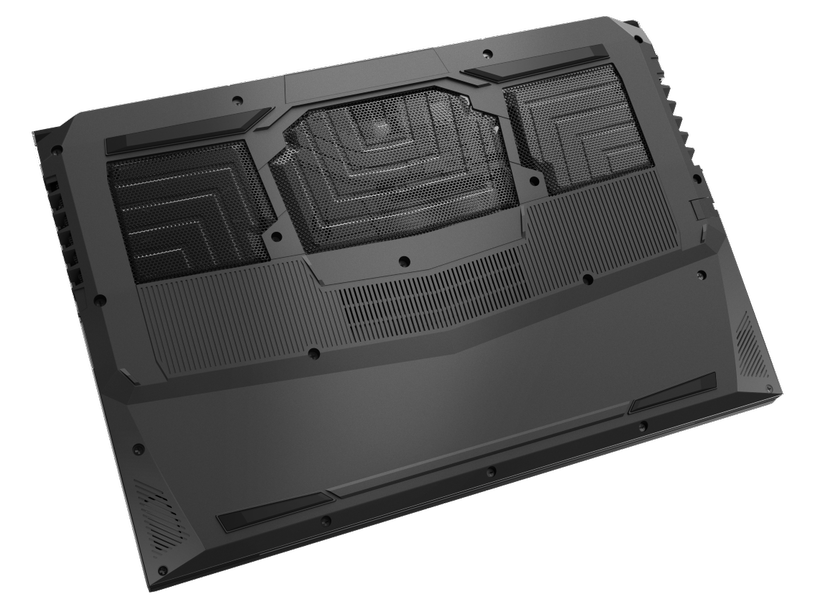 When I powered the laptop on, RGB lighting lit up the keyboard as well as the centre of the front lip of the laptop which looked very cool! These RGB colours can be easily adjusted to your colour and style using a simple control centre application. 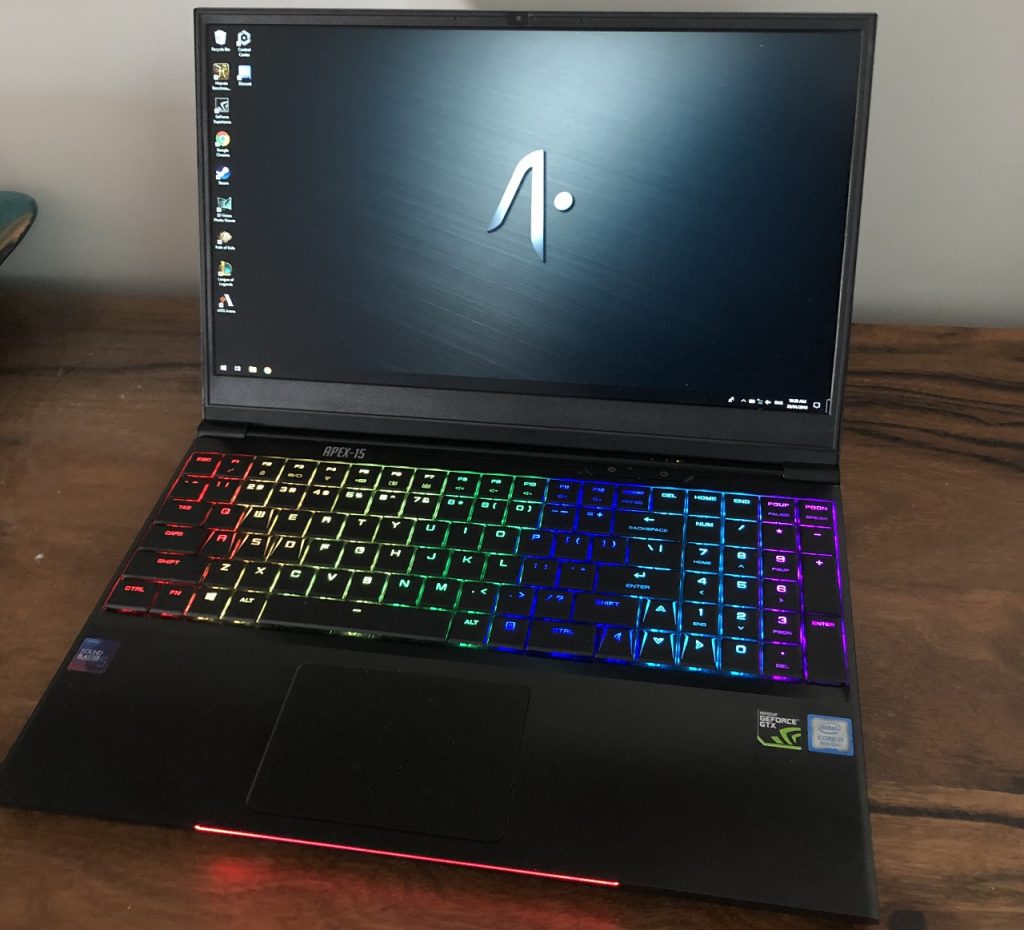 Once it quickly booted into Windows, I had a look at the system specifications which were impressive!

One complaint I have had with my recent experiences with laptops is a lack of hard drive space, especially considering some AAA games these days use 50+GB of space. While I was waiting to receive this laptop in the mail, I looked up the specifications online and saw that the base model comes with a 512GB M.2 drive as well as a 1TB SATA drive. You can imagine my disappointment when I saw that this demo model only had a 120GB M.2 drive and it was currently almost at capacity.

I also noticed that at 90% battery remaining, there was only 1 hour 20 minutes of usage left in the battery. Again, looking at the specifications on the AfterShock website, this laptop is advertised to have 4 to 5 hours of usage at full battery. I charged the battery to 100% but it didn’t improve much with 1 hour 40 minutes of power remaining. There are several factors that can affect the battery life and I didn’t want to play around with the power settings in Windows given this is a demo model. For the remainder of my testing I had the laptop plugged into power.

The games currently installed were Counter Strike Global Offensive, League of Legends and Path of Exile. Great games, but not ones that I wanted to use to test the power of this laptop. I had planned to use Shadow of the Tomb Raider, Playerunknown’s Battlegrounds (PUBG) and Just Cause 4, as these are games relatively new and require high specs, plus they can’t be run on high on my desktop PC given it’s dated specifications. I wanted to see how this laptop handled them given the outstanding components, but they were going to take up too much space. Even PUBG as the smallest of the 3 comes in at 23.6GB.

Here commenced 4 hours of troubleshooting and windows updates that I left going overnight as the Wi-Fi connection seemed to be misbehaving as I was only downloading at speeds of 30-40kb/s, as opposed to 5-6mb/s I was getting on my PC. Turns out there were some issues with the wifi adaptor drivers and settings, as well as a big Microsoft Windows feature update that was throttling my home Wi-Fi connection (funnily enough, it was also causing my baby monitor to lose connection). 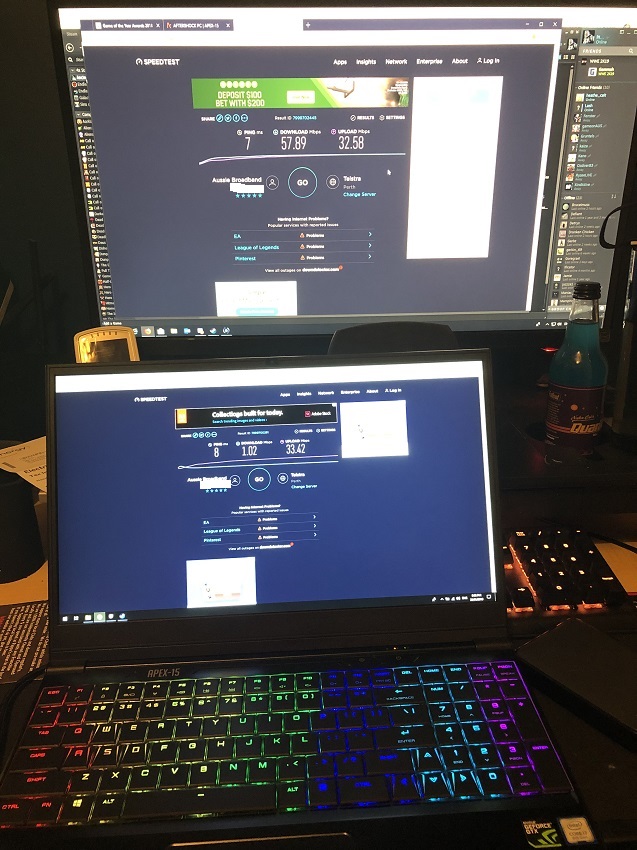 Long story short, once I cleared some hard drive space, completed the windows updates, updated the WIFI drivers and cleaned up unnecessary system files, I was left with 50GB to play with and a smooth-running system. You beauty! Time to set up PUBG and Tomb Raider and test this bad boy out. I loaded up Shadow of the Tomb Raider and loaded my save game, then the dual fan cooling system kicked in and we had lift off, quite literally. Bear in mind this is with the power plugged in.

The fans kicked in and were very loud when playing Shadow of the Tomb Raider, and remained at that constant level the whole time. The heat coming out the sides was very hot as well, to the point I had to move the power cable from along the left side and moved my mouse hand away from the right edge. At the top of the keyboard where the power button is was extremely hot to touch. I don’t think you could comfortably play games with this laptop on your legs as the heat would be too much. It was the same noise level when playing PUBG. I thought this might be attributed to graphically intensive games, so I launched the newly released Warhammer Quest 2: The End Times which has much lower system requirements, however the same noise level and heat was produced. 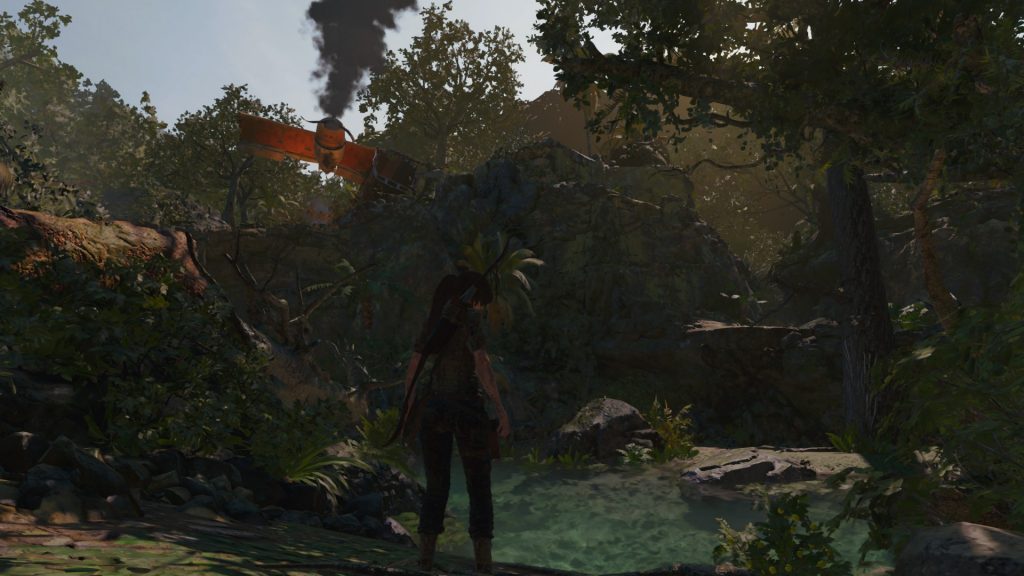 Despite the fan noise, I was amazed at how good the graphics were utilising the 144Hz screen and how smooth the game played. My PC has a 27” 60Hz monitor and until now, I had never understood the need to go up to 144Hz. Now that I’ve used this laptop, I really want to upgrade to a 144Hz monitor! Once again, I’m reminded exactly how old my desktop PC set really is. Whilst you can utilise the trackpad for games, I plugged in a wireless receiver and used a wireless mouse which I’d recommend be a staple purchase if you’re gaming on a laptop. 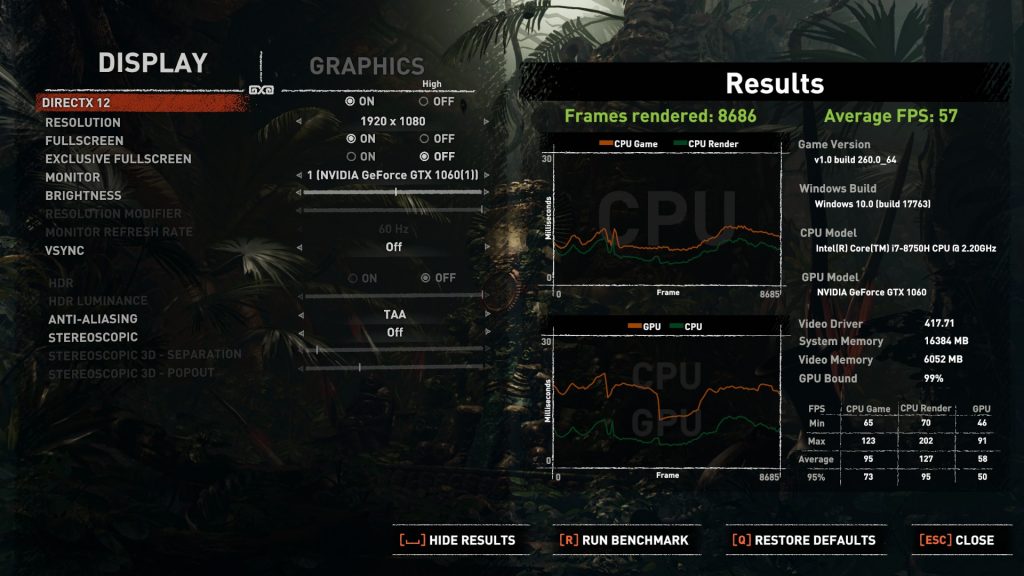 Shadow of the Tomb Raider comes with it’s own video benchmark program and when I ran this, the FPS ranged between 50 and 80 on high settings. There was no stuttering or hitching at all and when playing the actual game and looking at the water and surrounding jungle, it was incredibly detailed and this is in-part due to the 144Hz screen. When I played a match of PUBG, again I was blown away at how smooth the game played on ultra. On my main PC, when I jump out of the plane it will hitch a little, halfway down it will load in the ground graphics and when I land it’s usually a jolty landing, but this laptop was killing it! To the point where I saw my first enemy and killed him easily without any lag or freezes. Amazing!

I turned up the volume of the games to try and mask the fan noise, but it didn’t really help. Sound quality from the internal speakers was not as good and not as much bass as my PC with headphones of course, however when I played PUBG, even though the internal speakers were in front of me, I still got a sense of directional sound when gunfire was coming from behind me and to the right, and moved around me as I moved the character around, so that’s awesome as well.

I had a thought that perhaps the fan noise and heat were being produced because of the graphically intense games of Tomb Raider and PUBG. Earlier in the day I had purchased the new release of Warhammer Quest 2 and that game has much lower required system specs, so I figured the fan speed and heat would be less. Nope, it was the same volume of noise and heat coming from the fans. Aside from this though, I was impressed with how smooth gameplay was in all three games I tested.

Interestingly, I unplugged the power from the laptop and loaded up Tomb Raider to take a screenshot that I wanted. Once I loaded into the game, I noticed the game was running poorly with only 15-20 FPS and I also noticed the fans had not initiated. I then ran a graphics benchmark to see if there was any difference, and sure enough there was a massive difference. 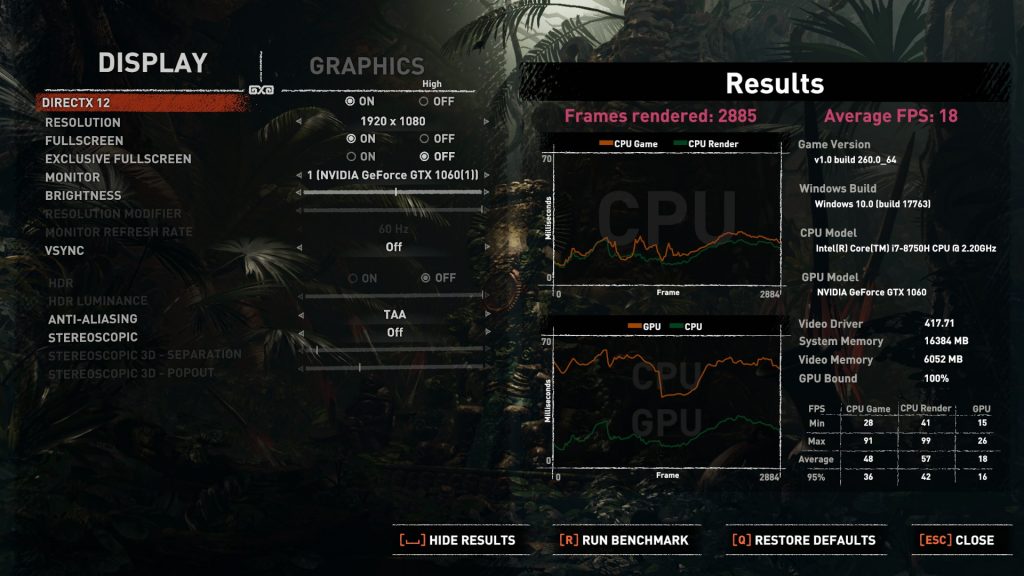 I can only assume that features to do with graphics and power are either turned off or tuned down to conserve power, at the sacrifice of graphics quality which almost made Shadow of the Tomb Raider unplayable on high settings. This is another reason that plugged in power is a necessity for gaming on this laptop.

Overall, I was very impressed with the features of the AfterShock APEX-15R laptop. From the mechanical RGB keyboard and 144Hz 1080p monitor, to the i7-8750H CPU and GeForce 1060 GPU. However, plugged in power was essential. It ran current AAA games with ease when plugged into power, but at the cost of loud noise and heat produced by the dual fan cooling system. The battery life on it’s own was chewed through quickly when gaming and meant you could only use this for gaming long-term from a stationary position plugged into power, reducing the portability bonus of being a laptop.

This demo laptop suffered from a lack of storage, so if this was your primary gaming device, you’d need to order in a version that has the system drive plus a decent sized additional drive. Alternatively you could invest in an external USB hard drive to store your games, but this could affect the quality of gameplay and loading over USB-3.0. At the current price of AUD1969, it is a very affordable laptop that can be used in the office and is more than capable for today’s games.

This review utilised a demo version of the AfterShock APEX-15R provided for review purposes by the legends at BIG Esports.