Aliens, Superman and Rick Sanchez: An Overview of Fortnite Season 7

AN intergalactic war has kicked off the latest season of Fortnite after aliens invade the island. Fortnite Season 7 has launched overnight featuring a new storyline, out of this world roster additions and new weapons. Yesterday we jumped in with a few other outlets for a special press sesh to check out all of the new content this season. 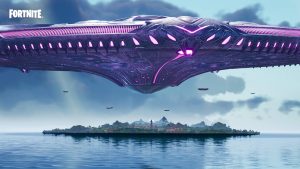 Titled “Invasion”, Season 7 sees the return of the Imagined Order who are fighting against the alien invaders. You’ll find members of the IO throughout the island along with their leader, Doctor Slone. But if you see them, remember that they’re no friend of yours. Taking down Slone’s in the top secret underground Imagined Order labs will score you a Mythic Slone Pulse Rifle.

Along with Slone’s Mythic weapon, both the IO and the alien invaders have developed new weapon tech for players to find. I never came across any of the new weapons during the in-game press meeting. However I did come across the new Rail Gun later on. This weapon packs quite a punch and is capable of one shotting players. Two shots if they’re in a vehicle.

Flying saucers can also be found around the island this season and are also capable of being hijacked. Not only can they traverse yourself or your entire squad around the island, they can also shoot projectiles and abduct objects/other players. These become a lot of fun when there are multiple within a small area. For instance, there were four or five of us with Flying Saucers in a Solo match trying to take down each other and the small remainder on the ground. It was a hectic yet fun change to the gameplay.

Crafting also makes a comeback this season after being a feature during Season 6. This crafting mechanic takes already existing weapons and turns them into once vaulted weapons. For example, an Assault Rifle can be turned into a Burst Assault Rifle. To do this you’ll need Nuts and Bolts, which can be found scattered around the island. 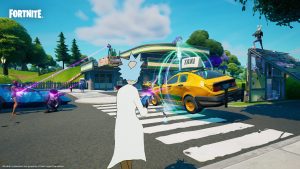 The most notable change to come to Fortnite this season is the way Battle Pass progression works. Gaining XP and leveling is still a thing, however they’ve completely revamped the rewards system. Instead of having specific rewards per level, you’ll be rewarded with 5 stars per level to spend on any reward you want. Of course, there are restrictions with what’s available depending on what level you are. But like this alien invasion, I’m embracing this new less restrictive rewards system. I’m on level 12 and I almost have enough V-Bucks for the next Battle Pass after starting this season with 150.

However, the grind is definitely worth my time with this seasons Battle Pass rewards. Three words: Rick & Morty. This seasons Battle Pass ends with unlocking Intergalactic traveler, Rick Sanchez. Morty makes an appearance too but as a hammer, which can be unlocked towards the end of the season. Rick can also be found on the island, however the one time I saw him was when one of the press peeps somehow pissed him off. He will attack if you do so.

Other characters and respective cosmetic items include Superman (available later on in the season), Doctor Slone and Kymera, a customisable extraterrestrial. Kymera can look as normal or as crazy as you want with different facial features, colours and more. Kymera’s customisable features can be purchased with Alien Artifacts found on the island. I’ll tell you where you can find some most of the time: The Aftermath.