The first question most World of Warcraft players will ask you is what faction you picked. Which is usually followed with either praise or judgement depending on who you pick. But gone are the days of opposing factions not being allowed to play with one another thanks to the release of Patch 9.2.5 for World of Warcraft: Shadowlands. 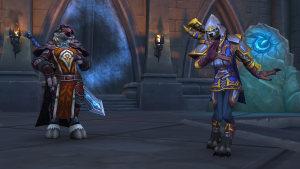 As of today, both Alliance and Horde factions will be able to play together in most raid/dungeon instances. This can be done via directly inviting a friends with a Battle Tag/Real ID to a party, or choosing to include to both factions within Premade Groups in Group Finder. Unfortunately, this is as far both factions are able to unite. Heroic Dungeons, Skirmishes, Random Battlegrounds and Guilds will remain single-faction only. There are also nine specific instances that don’t allow cross-faction play. These include:

Along with cross-faction play, Patch 9.2.5 also includes new achievements, quests and other quality of life changes which can be found in full detail here. Some changes are more notable than others, like the new Customization Questlines for Blood Elves and Dark Iron Dwarves. This questline rewards these these two classes with a new mount and weapon appearance. As well as a Blood Knight armor set for Blood Elf Paladins.

To begin these quests, Blood Elves must be Level 60 and Exalted with Silvermoon before picking up the quests from Liadrin in Oribos. Dark Iron Dwarves must be Level 50 and have completed “Heritage o’ the Dark Iron before starting their questline via Anvil-Thane Thurgaden in Shadowforge City, Blackrock Depths (accessed via Mole Machine).

Tank spec classes will now generate more threat after much feedback about threat loss from the community. And finally, players who have obtained Covenant Sanctum achievements on a character will now count torwards all of your characters. As long as those characters are part of a covenant.