An extremely Aussie (and Kiwi) experience has launched in Fortnite

JUST like the Island in Fortnite, Australia is considered a small island “down there somewhere.” And our neighbouring country New Zealand are even smaller. But the ANZ Fortnite community are not only officially putting their name on the map on Twitter, but we now have our very own Creative map called Lands Down Under. Filled with Aussie and Kiwi references, information and themed mini-games, Lands Down Under is the tourist destination for Fortnite players worldwide.

The Lands Down Under Creative map was created by the teams at Alliance Studios and Zen Creative, who’ve both been working within Fortnite Creative for the last 3 years. It’s been a massive passion project for the Creative builders who have worked tirelessly to bring the map to life. The end result is an experience that’ll make players, both local and international, feel like virtual tourists. Game On AUS as well as a hand full of creators/media were given the VIP tour ahead of the official launch. 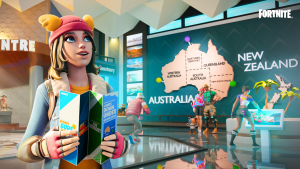 Educational information about the countries, their flora & fauna and even marine life are all housed within the Visitors Centre. It’s a museum, zoo and aquarium rolled into one. There’s even a cafe called the Ataahua Cafe, which is beautiful in Māori, where you can buy yourself a slurp drink. It doesn’t have any affect on you, but it makes the experience much more authentic.

The wildlife isn’t restricted to the inside of the Visitors Centre either, as we saw a very familiar site near the bins on the footpath. Alliance and Zen have crammed in as many iconic Aussie/Kiwi references as possible, including the infamous Ibis AKA Bin Chickens.

Though during the Media tour, my eyes were going straight towards the shiny gold coins scattered through out the Visitors Centre. I eventually asked what the deal was with the coins and was told their significance. A set of 6 limited-time Aussie sprays by Melbourne Artist George Rose were featured in Fortnite two years ago. However, access to said sprays has been granted once again if you collect all the coins scattered around the Visitors Centre. But you’ll have to be quick and logging in daily as numbers are limited for each spray, with one spray launching per day.

Alliance and Zen also mentioned a future feature for the Visitors Centre in the form of a Function Room. where both brands and individuals will be able to use the space to highlight themselves. 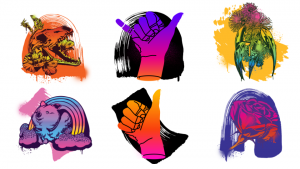 Not only is the Lands Down Under an educational hub but it also houses four different Down Under-themed mini-games. Each with it’s own unique flavour of gameplay and obvious ANZ flare with plenty of local references.

Aussie Trade Empire is a 4-player tycoon-like building game where players become newbie Tradies, building houses as fast as they can. From the ground up, players build houses by completing paying jobs to reach the upgrades needed to unlock even more jobs. This includes everything from making and laying bricks to buying wood from “not Bunnings”. The building process as you upgrade will either increase or decrease in difficulty, depending on what job you’re doing.

If you’re a fan of Overcooked, you’ll love Bake vs Batter. It’s a 2 player game where one players cooks and serves in an authentic style bakery, while the other works in a Fish & Chip shop. And because you’re working solo, it’ll become a hectic race to the finish line where the player who makes the most amount of money at the end of the day wins. My suggestion though was to add Yelp ratings to really keep players on their toes. Fingers crossed they add this eventually.

Finally, Kiwi Hideout is a solo mini-game where you have to find 10 Kiwi birds as fast possible. Alliance Studios and Zen Creative confirmed that there are 50 different location the birds can spawn so it won’t be as easy as you think.

To access Lands Down Under Creative map, just enter this code into Fortnite Creative: 4371-6551-3016