New legend Wattson comes packed with electrically charged abilities. Her tactical ability is Perimeter Security which connects nodes to create electrified fences that damage and slow enemies. The passive ability is Spark of Genius where ultimate accelerants fully charge your Ultimate Ability, and standing near interception pylons boosts your perimeter security recharge. Her ultimate is the Intercept Pylon, an electrified pylon that destroys incoming ordnance and repairs damaged shields as long as it stands (3 maximum).

The new L-STAR weapon is a rare and powerful LMG. This weapon fires large, high-damage plasma projectiles at a super fast rate. The L-STAR only spawns in airdrops (like the Mastiff and the Kraber), and comes with a limited ammo supply that can’t be refilled, so it’s use will be situational. When the L-STAR overheats, its lens breaks and needs to be replaced which takes precious killing time. Expert players will learn to feather the trigger with short/medium bursts, taking short breaks to let the weapon cool down. There are also a tonne of updates to existing weapons to improve the player experience. You can read all of the weapon changes here.

Players that purchase the Season 2 Battle Pass will be rewarded with a tonne of content to extend your enjoyment of the game and grant you extra challenges to unlock exclusive rewards. Players will instantly get the Gilded Gibraltar, Valor Bangalore, Dreadnought Pathfinder, and Spitfire Intimidator skins with the purchase. There are new emotes, music packs and loading screens to earn, as well as hero/weapon skins, stat trackers and more. For players that don’t want to purchase the Battle Pass, there’s still an opportunity to earn the following through general play during this season:

During Season 2 Battle Charge, players can take on daily and weekly challenges to score bonus Battle Pass XP and level up even faster, so it’s not just a ‘time played’ progression system which is great. You can also grab more Legendary skins from the reward track and earn enough crafting materials to create a Legendary item of your choice. You can have a more in-depth read about the changes to the new daily and weekly challenges here. 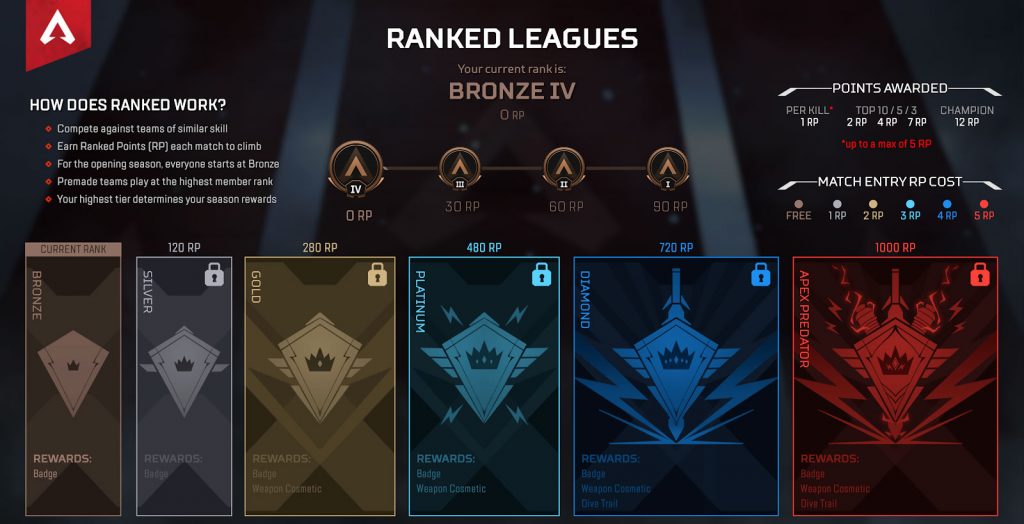 Respawn developers have been running simulations on the scoring system using actual player data from Season 1 to carefully approach Ranked Leagues in Season 2. The first series of ranked leagues will run for the duration of Season 2 which is from today through to September. Respawn have said that this format may change. “Future Ranked Series may not be in sync with the larger Apex Seasons as we may need more time for players to settle on their true skill level.” Ranked Leagues features six competitive tiers: Bronze, Silver, Gold, Platinum, Diamond, and Apex Predator. All of the tiers except Apex Predator have four divisions; Gold IV, Gold III, Gold II, and Gold I, with Gold I being the top division in Gold tier. All players will start in Bronze IV for the launch of Ranked Leagues, but future Series should have a starting placement if you’ve climbed the ladder in previous Series.

There is a hell of a lot more to these ranked leagues as this will really ramp up the competitive opportunities for esports. Settle in for some light reading to get your head around the new Ranked Leagues here.