CUPERTINO, CALIFORNIA Apple today unveiled the new Mac mini, supercharged by M2 and the all-new M2 Pro. With the M2 chip, Mac mini is even more powerful, capable, and affordable with a new starting price of just A$999 inc. GST. The new M2 Pro chip delivers pro-level performance to Mac mini for the first time, enabling users to run high-performance workflows that were previously unimaginable in such a compact design. Mac mini with M2 and M2 Pro delivers faster performance, even more unified memory, and advanced connectivity, including support for up to two displays on the M2 model, and up to three displays on the M2 Pro model. Paired with Studio Display and Magic accessories, along with the power and ease of macOS Ventura, Mac mini provides a phenomenal desktop experience that will take users’ productivity and creativity to the next level. Customers can order the new Mac mini models today, with availability beginning Friday, 3 February.
“With incredible capabilities and a wide array of connectivity in its compact design, Mac mini is used in so many places, in so many different ways. Today, we’re excited to take it even further with M2 and M2 Pro,” said Greg Joswiak, Apple’s senior vice president of Worldwide Marketing. “Bringing even more performance and a lower starting price, Mac mini with M2 is a tremendous value. And for users who need powerful pro performance, Mac mini with M2 Pro is unlike any other desktop in its class.”
Even More Performance with M2 and M2 Pro 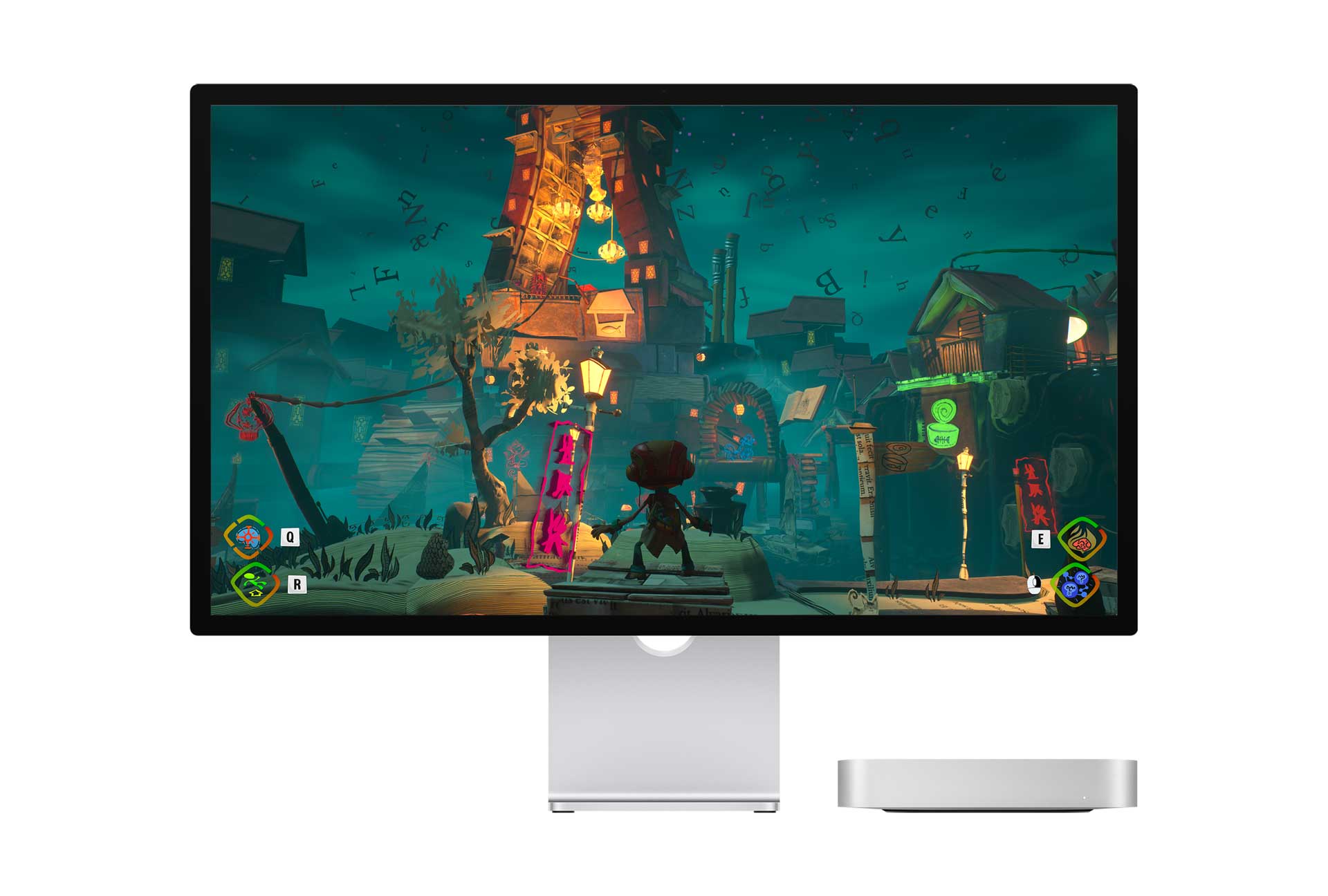 Mac mini with M2 features an 8-core CPU with four high-performance and four high-efficiency cores, along with a 10-core GPU — perfect for users looking for super-fast performance and incredible productivity at an even more affordable starting price of A$999 inc. GST. Everyday tasks are blazing fast — from launching and multitasking between apps to browsing the web. For users with more intensive tasks, Mac mini with M2 also powers through even more demanding workloads. With up to 24GB of unified memory and 100GB/s of bandwidth, activities like image editing in Adobe Photoshop are up to 50 per cent faster1 than the previous generation. M2 also adds ProRes acceleration to Mac mini, so tasks like video editing in Final Cut Pro are more than twice as fast.1The M2 model can also simultaneously play up to two streams of 8K ProRes 422 video at 30 fps, or up to 12 streams of 4K ProRes 422 video at 30 fps. With all this performance, Mac mini is up to 5x faster than the bestselling Windows desktop,2 delivering incredible value to first-time computer buyers, upgraders, and PC switchers.

• Up to 2.4x faster ProRes transcode in Final Cut Pro.
• Up to 50 per cent faster filter and function performance in Adobe Photoshop.
• Up to 35 per cent faster gameplay in Resident Evil Village.
Mac mini with M2 Pro

M2 Pro brings pro-level performance to Mac mini for the first time. Featuring up to a 12-core CPU with eight high-performance cores and four high-efficiency cores, along with up to a 19-core GPU, M2 Pro has 200GB/s of memory bandwidth — double the amount in M2 — and supports up to 32GB of memory. The next-generation Neural Engine is 40 per cent faster than M1, speeding up ML tasks like video analysis and image processing. Designed to dramatically accelerate video playback and encoding while using very little power, M2 Pro offers a powerful media engine, which speeds through the most popular video codecs and can simultaneously play up to five streams of 8K ProRes 422 video at 30 fps, or up to 23 streams of 4K ProRes 422 video at 30 fps. The M2 Pro-powered model is up to 14x faster than the fastest Intel-based Mac mini.3

When compared to the 27-inch iMac with Intel Core i7 and Radeon Pro 5500 XT,4 Mac mini with M2 Pro offers:
• Up to 50 per cent faster filter and function performance in Adobe Photoshop.
• Up to 5.5x faster panoramic merge in Adobe Lightroom Classic.
• Up to 4.4x faster object tracking in Final Cut Pro.

• Up to 2.5x faster graphics performance in Affinity Photo.
• Up to 4.2x faster ProRes transcode in Final Cut Pro.
• Up to 2.8x faster gameplay in Resident Evil Village.

With M2 Pro, Mac mini users can run high-performance workflows that were previously inconceivable in such a compact form factor. Musicians can produce music with incredibly powerful plug-ins and effects without missing a beat, while photographers can adjust huge images in an instant. Creators can seamlessly work in multicam with multiple camera formats, including ProRes video, and gamers can play demanding titles in console quality. Gaming performance is up to 15x faster than the fastest Intel-based Mac mini.3 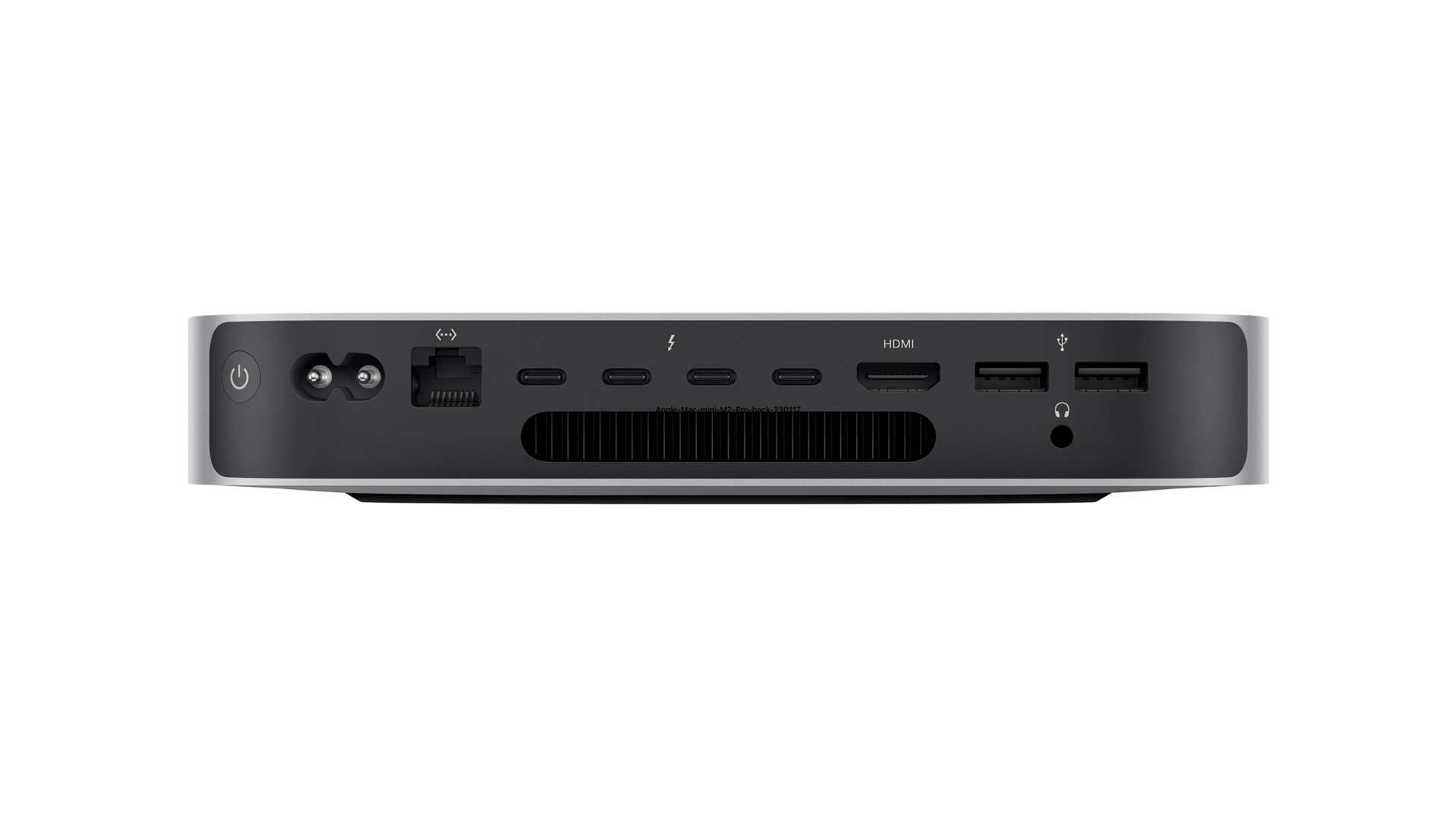 Mac mini continues to deliver extensive connectivity with a wide range of ports. The M2 model features two Thunderbolt 4 ports and support for up to two displays. The M2 Pro model includes four Thunderbolt 4 ports and support for up to three displays. Additionally, the M2 Pro model can support one 8K display, a first for the Mac. Both models feature two USB-A ports, an HDMI port, a Gigabit Ethernet port with a 10GB option, and an upgraded headphone jack to support high-impedance headphones. For wireless connectivity, both new models also feature the latest standards with Wi-Fi 6E5 for up to 2x faster throughput than before, as well as Bluetooth 5.3.

A Phenomenal Desktop Experience with Studio Display and Magic Accessories

With macOS Ventura, Mac mini delivers even more performance and productivity. Powerful updates like Continuity Camera bring videoconferencing features to any Mac, including Desk View, Center Stage, Studio Light, and more. Handoff in FaceTime allows users to start a FaceTime call on their iPhone or iPad and fluidly pass it over to their Mac, or vice versa. And tools like Stage Manager automatically organise apps and windows, so users can concentrate on the task at hand and still see everything in a single glance.

Messages and Mail are better than ever, while Safari — the world’s fastest browser on Mac — ushers in a password-less future with passkeys. With iCloud Shared Photo Library, users can now create and share a separate photo library among up to six family members, and the new Freeform app provides a flexible canvas that helps users be more productive and expressive, whether they are planning or brainstorming on their own, or with others. With the power and popularity of Apple silicon, and new developer tools in Metal 3, gaming on Mac has never been better. 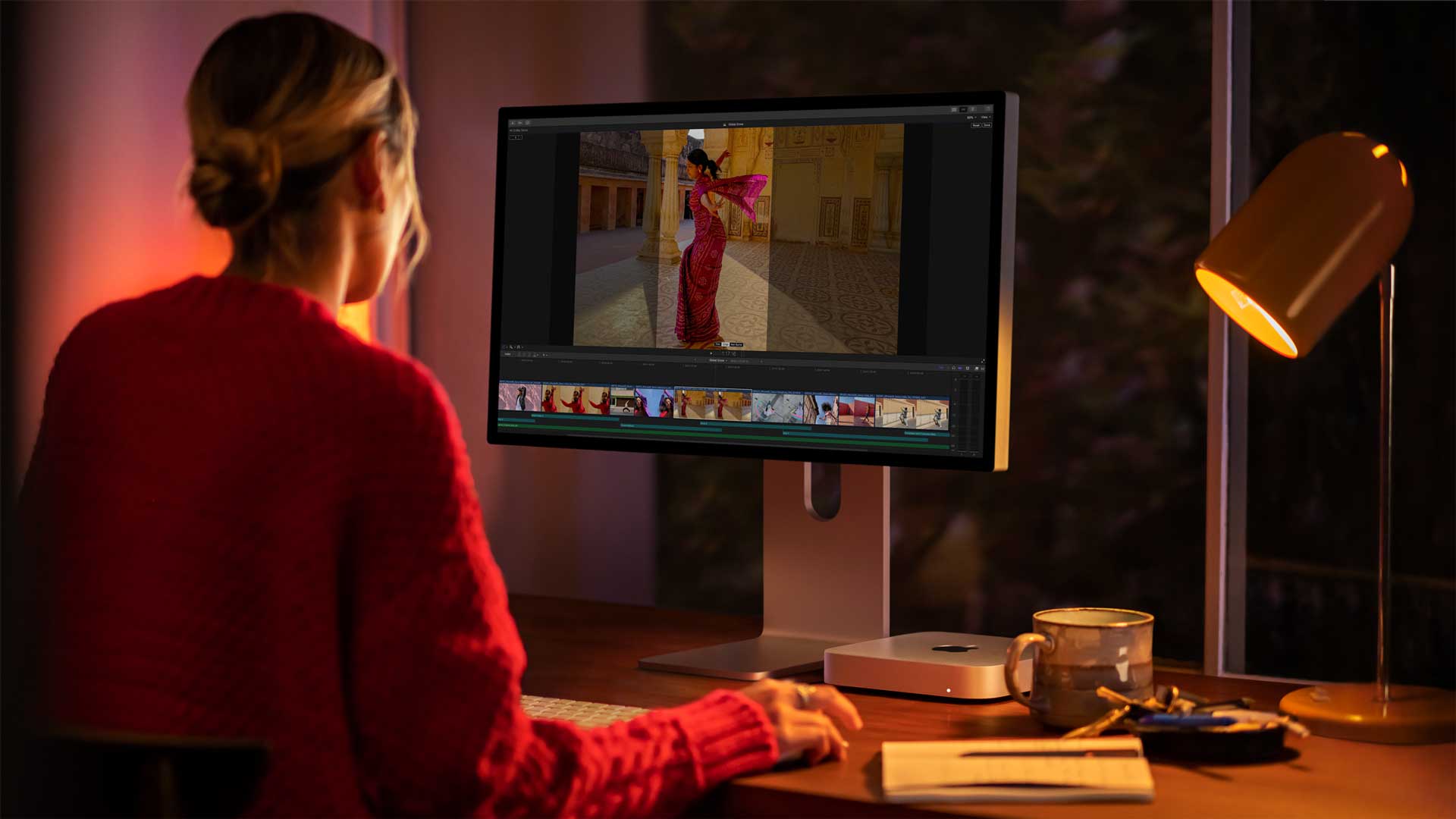 Mac mini and the Environment

Mac mini is designed to minimise its impact on the environment, including 100 per cent of the following recycled materials: aluminium in the enclosure, rare earth elements in all magnets, tin in the solder of the main logic board, and gold in the plating of multiple printed circuit boards. It also features 35 per cent or more recycled plastic in multiple components and meets Apple’s high standards for energy efficiency. It is free of numerous harmful substances, and 96 per cent of the packaging is fibre based, bringing Apple closer to its goal of completely removing plastic from its packaging by 2025.
Today, Apple is carbon neutral for global corporate operations, and by 2030, plans to be 100 per cent carbon neutral across the entire manufacturing supply chain and all product life cycles. This means that every Apple device sold, from component manufacturing, assembly, transport, customer use, charging, all the way to recycling and material recovery, will have net-zero climate impact.
Pricing and Availability
• The new Mac mini with M2 and M2 Pro is available to order today, 18 January, on apple.com/au/store and in the Apple Store app in 27 countries and regions, including Australia. It will start arriving to customers, and in Apple Store locations and Apple Authorised Resellers, beginning Tuesday, 24 January.
• Mac mini with M2 and M2 Pro will be available in Australia, China, Hong Kong, Japan, Macau, and New Zealand beginning Friday, 3 February.
• Mac mini with M2 starts at A$999 inc. GST and A$829 inc. GST for education. Additional technical specifications are available at apple.com/au/mac-mini.
• Mac mini with M2 Pro starts at A$1,999 inc. GST and A$1,849 inc. GST for education. Additional technical specifications are available at apple.com/au/mac-mini.
• Additional technical specifications and details on Studio Display and Magic accessories are available at apple.com/au/store.
• Every customer who buys a Mac from Apple can enjoy a free Online Personal Session with an Apple Specialist; get their product set up in select stores, including help with data transfer; and receive guidance on how to make their new Mac work the way they want.
• With Apple Trade In, customers can trade in their current computer and get credit toward a new Mac. Customers can visit apple.com/au/shop/trade-in to see what their device is worth.
• AppleCare+ for Mac provides expert technical support and additional hardware coverage from Apple, including up to two incidents of accidental damage protection every 12 months, each subject to a fee.
Share. Facebook Twitter Pinterest LinkedIn Tumblr Email
Previous ArticleApple unveils M2 Pro and M2 Max chipsets
Next Article Apple unveils MacBook Pro featuring M2 Pro and M2 Max chipsets