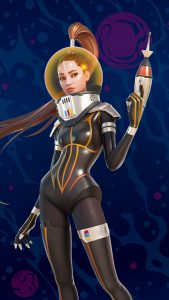 AFTER a successful in-game concert back in August of this year, Ariana Grande has returned to Fortnite for Halloween. Ariana was first spotted in the latest Fortnitemares trailer dressed as a Spacefarer. Fans of the pop singer will be happy to hear that her Spacefarer outfit as well as a plethora of themed cosmetics are available now in the Fortnite Item Shop. Ariana Grande also has her own questline in  Fortnite for the Fortnitemares event, which runs until November 2.

Owners of the Spacefarer Ariana Grande outfit who finish her questline will also get early access to a yellow colour variant of her intergalactic outfit, called Captain A. Grande. No stress though if you don’t finish her questline as you won’t miss out on Captain outfit either. You will however have to wait until the end of Chapter 2 Season 8 to gain access to it.

Today’s Ariana Grande announcement is also shared by some exciting news for Fortnite with its first ever PvE tournament. The Fortnitemares Cup is a Horde Rush event where teams of four can squad up to gain as many points as possible across five matches. The tournament will run from 3PM AEST on Saturday October 23 through until 3AM on Monday October 25. Three prizes are up for grabs for teams who achieve a certain amount of points. 500 points will get you a Loading Screen, 1000 rewards you the Feeling Wrathful Spray and 2000 points wins you the Ghoul’d Game Emoticon.