BLUEMOUTH Interactive have just announced the Australian launch date of the Atari VCS, Atari’s first system to launch in 25 years. This modern virtual computer system with a retro aesthetic will launch on June 10 and is said to pack a plethora of retro nostalgia and more.

The Atari VCS is a console/PC hybrid designed for both work and play, running on an AMD Raven Ridge 2 GPU and Ryzen GPU with 8GB DDR4 RAM and a 32GB hard drive. It features over 100 classic Atari/arcade games via the Atari VCS Vault including Asteroids, Centipede and Missile Command. However it won’t just be Atari’s library of classics to choose from.  The Atari VCS also comes with over a dozen titles from independent developers with a constant stream of additions to come. 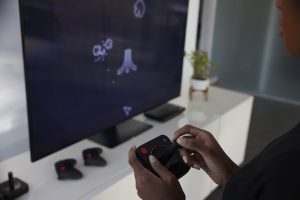 “We’re so excited to bring this reimagined ‘80s icon back in a completely modern way to everyone’s living rooms with the Atari VCS,” said Bluemouth Co-Founder and Managing Director David Provan. “The system brings a hit of nostalgia to fans with its classic arcade titles, but also complete versatility to play newer games and stream all in the same place.”

The launch of the Atari VCS also coincides with the launch of Antstream Arcade in Australia. This gaming streaming service offers a carefully curated library of over a thousand classics such as Earthworm Jim, Double Dragon and Mortal Kombat Klassic. Antstream Arcade is also available across a wide variety of platforms, coverage everywhere isn’t guaranteed as it only has servers in Sydney.

When you aren’t gaming, the Atari VCS also lets you surf the web, check e-mails or catch up on work with Google Chrome and Workspace built-in. You won’t be restricted to it’s wireless joystick and modernized controller as it’s also compatible with most keyboard, mice and controller peripherals.

Before you plan on snatching one up when it launches next week, be aware that this tiny system packs a punch in terms of price. The Atari VCS will set you back AU$849.99/NZ$899.99. Pre-orders are being taken now at JB HiFi, EB Games, Catch.com.au, The Gamesmen and Might Ape.