There’s no doubt that August 2018 will be the biggest month this year for Blizzards MMORPG World Of Warcraft and Azeroth itself.

The release of  the new expansion Battle For Azeroth is but a mere 9 days 21 hours and 11 minutes away at the time of writing this and the conflict between the Alliance and the Horde is at a all time high. With a scheduled worldwide release (the first time ever for the game) for 14th August. The anticipation is certainly growing as experienced, new and returning players have been declaring their allegiance to their factions with the help of awesome marketing from Blizzard. TV commercials showing real life encounters between players of each faction unable to get along doing simple task like finding a seat on a busy bus, or rather stand out in the rain then share a strangers umbrella with a Horde symbol on it! The release of 2 animated shorts of the Warbringers series (1 more still to come) had the internet torn and going crazy. We saw the return of Jaina Proudmoore which sent chills through everyone (pun intended) and the destruction of the World Tree: Teldrassil by Sylvanas Windrunner which split the Horde community itself questioning everything.

With the internet, communities, forums, friends and family still discussing everything Alliance and Horde related Blizzard dropped a powerful cinematic “Old Soldier”. A short movie with the legendary Horde warrior Varok Saurfang. No spoilers here, we just suggest you find 7 minutes right away and watch it! Click here

As Azeroth prepares itself for the battle between Alliance and Horde and the pre-expansion event “War of the Thorns” happening right now in Darkshore & Teldrassil (RIP) and soon Lordaeron. There is still so much going on in-game to keep players of all levels busy and preparing for the war to come. Lets break down the coming month of August in Azeroth!

To start things off Sunday 5th August to Saturday 11th will see Silas Darkmoon and the Darkmoon Faire open for business!

Play games and redeem tokens for prizes; mounts, pets, transmog, toys and more. Doesn’t matter if you’re visiting for the live bands, the zoo, to help level your professions or riding the carousel for that sweet +exp buff there’s something for everyone, just remember to buy some tokens and get involved! 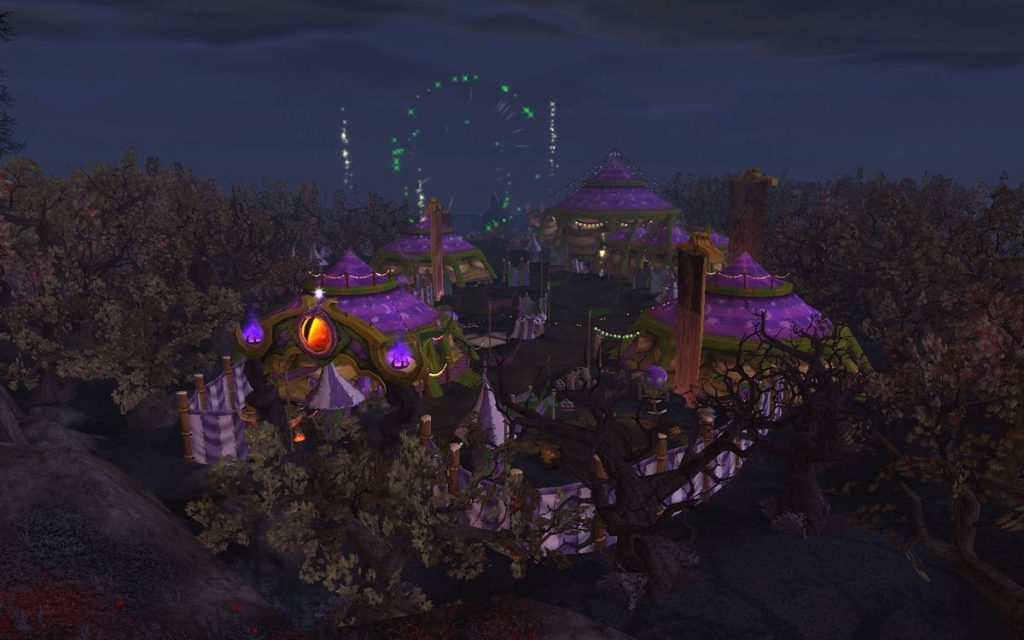 Starting Tuesday 7th to the 14th. Winter time has hit the PvP battleground Arathi Basin. The objectives are the same as regular Arathi Basin, however there is reduced visibility with the fog and the terrain has frozen over!

August 14th: the much anticipated Battle For Azeroth expansion goes live as the War of the Thorns ends and the factions collide! Take up arms, declare your allegiance and join the fight!

The weekly event: Trial of Style

The 17th to the 21st of August you can hit the catwalk and compete in a fashion parade to earn tokens and pride to take out first place. After all that fighting on the battlegrounds of the new islands Kul Tiras and Zandalar, it’s time to take a break and join in the fight of the Trial of Style. Redeem tokens from competing for more transmog options and be the envy of that Male Blood Elf that’s always dancing in Orgrimmar.

To finish off the events in August with the PvP Brawl: Gravity Lapse.

Starting Tuesday 21st until 4th September. Heroes can sign up to this PvP brawl which takes place on the Eye of the Storm battleground. The game is the same objective as normal with the exception that you periodically shot up into the air. You get launched high for 3 seconds with the buff Gravity Lapse then you start to fall super quick. The gravity lapse is enough so you can quickly fly from base to base or anywhere across the map. No fall damage is applied during the buff. First faction to reach 1600 resources gets the spoils.

On that it’s safe to say August is going to be titanic month for Blizzard and the champions of the Alliance and Horde! So much happening in game as we arrive to the expansion Battle For Azeroth. The marketing around the launch of the game and the returning in game events will keep both factions busy as we armour up, sharpen our weapons for battle and declare our allegiance. Be sure to keep an eye out as we are sure this isn’t all Blizzard has in-stored for us for August in Azeroth.

PS. For The Alliance!