Aussie Dance-Punk Trio To Launch Their First Ever Game 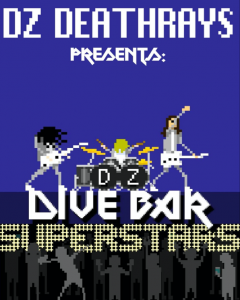 ARIA award-winning Brisbane band DZ Deathrays, whose tracks have appeared in Tony Hawk’s Pro Skater series and NHL 22, have announced they’re launching their own video game. And it was created by the band themselves. The game, titled Dive Bar Superstars, is the brainchild of DZ Deathrays drummer Simon Ridley, who created the game during lockdown.

Dive Bar Superstars is a retro style pixel action game scheduled to release on October 29 for Apple iOS/Google Play with a Steam release on November 19. You play as a rock band who make their way in the music world starting at house parties and rising all the way up to the main stage. Game progression also unlocks tracks from DZ Deathrays’ catalogue of music.

“I think ultimately we’re always just looking for new and fun ways for us to bring our music to people. The game gives us the opportunity to share a simplified perspective of what it sometimes feels like trying to ‘make it’ in a band. For example: saving up to blow all your money on pyro for a gig is one of the greatest joys of being in a rock band, so it’s cool to be able to share that feeling a little with our fans.” says Simon.

DZ Deathrays have also organized a launch party for Dive Bar Superstars over on Twitch on the night of October 29. The boys will be joined by musician Jamie Timony, member of the band These New South Wales, as well as a few secret ANZ-based creators.