There’s a new video game turned genre that’s taking the world by storm. Not just with casual gamers but even the eSports community. It’s called Auto Chess, and it’s extremely addictive. So much so I’m now sinking hours into this niche genre across 3 separate games. Popular MOBA, Dota, have quickly jumped on the bandwagon releasing their own version, Dota Underlords. Not to be confused with Dota Auto Chess, which was a Dota 2 mod developed by Auto Chess devs, Drodo Studio. League of Legends have also followed suit with their version, Team Fight Tactics. Across the three games they can be found on both PC and mobile. Yes, this addiction is following me everywhere. I’ve played other mobile games like Hearthstone where I become addicted for two days. The aftermath is it becomes forgotten about or boring, which leads to hitting the uninstall button. The way Auto Chess’ gameplay is executed is so simple yet can be quite engaging. In late game it becomes almost as exciting as game of sport. As I explore each title, I’ve found them to be both very similar to each other but notably different. Instead of breaking down just one title, I’m going to break down all three.

Unless you’ve already looked into Auto Chess or started playing any of the games, you probably probably have a lot of questions. What is Auto Chess? Do I have to be good at chess to play? Does it do the work for you?

Well it kind of does half the job for you but it’s definitely no idle player game. And no prior chess knowledge is required. The word “Chess” is more so a part of the title than the mechanics themselves. However the action does take place on an 8×8 chess-board like playing field. In Auto Chess, you don’t compete solely against 1 other player. There’s 8 of you, all starting with 100 HP, one playing piece and a goal to be the last standing. Once on the board, that piece is free to move wherever and attack whoever they want. Over the course of the game you battle solo against other players, buying and collecting more pieces and whittling down other peoples HP. Collect multiple of the same piece and you can boost them to become even more powerful. Every few rounds you’ll fight against AI which drop helpful loot, like gear and buffs for your pieces.

However you can’t just overwhelm your opponent by having as many pieces as you can on the playing field. As you progress you gain XP and level up, level 1 you can play 1 piece, level 2 you can play 2 pieces and so on and so forth. You can bench up to 8 pieces which becomes a bit of a juggle later on during late game. Along with also being able to purchase XP, there’s a lot of prioritizing and strategic thinking going on that first timers might find overwhelming. The key is to plan ahead and don’t be greedy.

You can’t just go picking any old piece though. Well I mean you can, but this where a lot of the strategy comes into play. Each piece comes with a class and sub-class. When playing the same class sets together they form a synergy that boost your chances of winning fights, giving your pieces different buffs. At first my whole focus was on leveling to max level 10 ASAP. Then it was working on boosting the pieces I already had while collecting more powerful pieces and then trying to boost them. While sometimes successful I realized coming up to the final 4 that these tactics weren’t going to cut it. Team synergy is everything when it comes to winning a game. You won’t get the exact flow you want every time. But when it happens, it makes for some creamy plays on the field. So why won’t you get what you want every time? Three letters, RNG.

RNG is the true mechanic for Auto Chess. You can be an awesome player when it comes to strategies but only when the all mighty RNGeezus is in your favour. Store choices per round are very random, another reason to plan accordingly. But RNG can sometimes have some unfair and strange results since it also happens on the battlefield. No two fights between players are the same. Meaning if you’re fighting against Joe on your screen, Joe might not be battling you on his. He’s battling against Bob at the same time. So if you and Joe end up battling each other at the same time, the fight aren’t going to be the same on each screen, meaning the possibility of different results. I’ve watched this go down before. Same pieces, same placement but somehow both players won. RNGeezus works in mysterious ways and in my opinion, has to be fixed.

Be in for a long game though as Auto Chess can last up to 30+ rounds. Which is about 30-45 minutes long. I’m happy that there’s a game like this that can be played on mobile but it’s definitely no time 5 minute time waster.

While mechanically the same, here are the differences between the three that make them unique. From what I’ve just described, this is how the main Auto Chess games works. However it contains one sometimes controversial thing the others don’t or haven’t establish yet and that is Micro-transactions. Obviously this isn’t a pay-to-win type of deal. The items seen are merely cosmetic items which personally isn’t a big issue as it may be for others. You can play casual, custom and rank modes and is probably the most user friendly of the three. There’s a Chess Pass which for a small micro-transaction can be upgraded to premium, as well as seasons. They’ve also recently added a new character race. For the smallest of the lot, it offers the most.

At the time of writing this, Auto Chess is only available on Android but there’s word of a PC Alpha coming to Epic Store later this week. 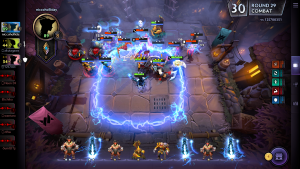 Onto Dota Underworlds now and frankly, a part from using Dota characters, the similarities are very much the same. Layouts, UI, piece attacks, If you’ve started with Auto Chess it’s a very smooth transition into Dota Underlords. However there are a few differences. It’s currently still in Beta but a full release is imminent in the coming months. There’s no battle pass for it that we know of but it does have a Beta Season. As you level up in season you change ranks. But so far there’s no real rewards for it a part from bragging rights that you’re top rank. With that aside, Dota Underlords is still as much fun as Auto Chess and I can’t wait to see what it has in store outside of its Beta.

It’s available right now on Steam, Android and iOS. If you’re playing on Android or iOS you’ll still need a Steam account to play, which also means progress between PC and mobile is connected.

Last but not least, Team Fight Tactics. The most farthest away from being like the others. Sometimes good but sometimes bad. Running out of the League of Legends client, this version is also still in Beta but offers a bit more than Dota Underlords. Weekly challenges are available with a rewards system similar to Battle Pass. Nothing overly special is on offer, just your basic cosmetic items. The only mode you can play at this time is Casual with a Rank mode coming soon. TFT plays a little differently as well on a more rectangular 6×8 playing field split into hexagonal spaces. This definitely leads to even more strategy when it comes to piece placement which is something I’m yet to master. 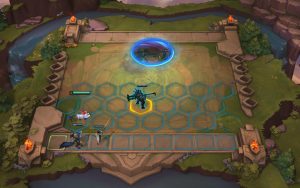 However its execution still needs polishing. There’s been one too many moments where one of my pieces is standing on the field, doing nothing while a 10 man fight going on. It’s still in Beta, I’ll give it that but they need to fix up these AFK acting pieces ASAP. TFT’s loot system isn’t the greatest either, I don’t want to call it bad overall but sometimes it doesn’t feel as fair. Unlike the other two, Team Fight Tactics also offers a loot round for free pieces. Not everyone gets to choose at the same time as the higher you are on the leaderboard the longer you must wait your turn. It’s fair in a sense, but personally I’d prefer everyone be allowed the same chance. RNGeezuz is still at large in this game as well, why can’t we just let it do our bidding when it comes to choices. Knowledge of the League of Legends heroes does help. You can look at the weapons to guide you but there isn’t anything to tell you what these characters and their classes are. Another thing the other two do better than Team Fight Tactics is make it extremely obvious that there’s an intermission between rounds. Too many times I’ve exclaimed “oh shit!” with less than 10 seconds until the next round and I’ve had to frantically buy, sell, swap and gear up my pieces.

Given that it’s still in Beta I don’t want to be too harsh. But if Team Fight Tactics makes some slight tweaks to its gameplay, this could be my overall favourite go-to Auto Chess. Sadly it’s not. Team Fight Tactics can be found within the League Of Legends client, which can be downloaded right here.

There is another Auto Chess game on the market called Chess Rush but at the time of writing this, my phone had problems downloading it. The only difference I know of is the turbo mode where games last for 10 minutes unlike the usual 30-45. I don’t have enough Auto Chess in my life so I can’t wait to give Chess Rush a crack as well.

I hope this has educated you on everything Auto Chess and we’ll be keeping you updated on Dota Underlords and Team Fight Tactics once they come out of Beta.