Bayonetta 3: Fun With The Umbra Witch

Everybody’s favourite Umbra Witch with the high heel guns is back in Bayonetta 3. The GOA team has been looking forward to seeing what this game has in store for us.

The Witch Is Back

I do have a confession to make. I loved the first Bayonetta game but have not played Bayonetta 2. The first Bayonetta had fun combat, and the story of the Umbra Witches and Lumen Sages was engaging. The Lumen Sages only feature in bonus areas in Bayonetta 3, replaced as the antagonist by the Singularity. This being is breaking down the multiverse to create their own Alphaverse. 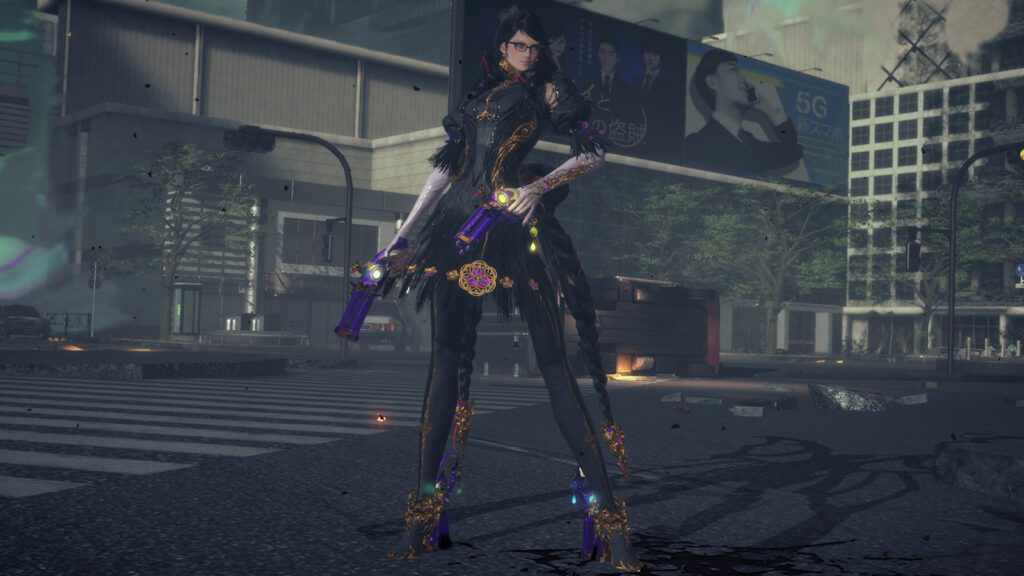 The game looks good for a Switch title. Character models are detailed and move well. Colours are used very well, not only in the different levels but also in the fights to make things stand out. I did find the shaky cam a bit much at the beginning, but I got used to it. Some of the larger enemies made it hard to see what was going on when taking on multiple bad guys at once.

Combat in Bayonetta 3 is still as hectic as it was in previous titles and Witch Time still slows down time on a perfect dodge. There’s plenty of combos for you to make use of and loading screens let you try out new combos, although I found that the game would load the next level when I was in the middle of learning a new combo. There is an option to press a button to stay in the loading screen, but I found myself wanting a ‘press button to start level’ option rather than a ‘press button to keep practicing’ one.

All Eyes On Me Now!

Playable characters, weapons and summonable monsters called Infernal Demons can be upgraded to unlock new combos or just deal more damage and Rodin is back along with the Gates Of Hell. He sells things like consumable items to heal and boost stats, accessories with different status effects, and costumes. You can also craft your own consumable items. 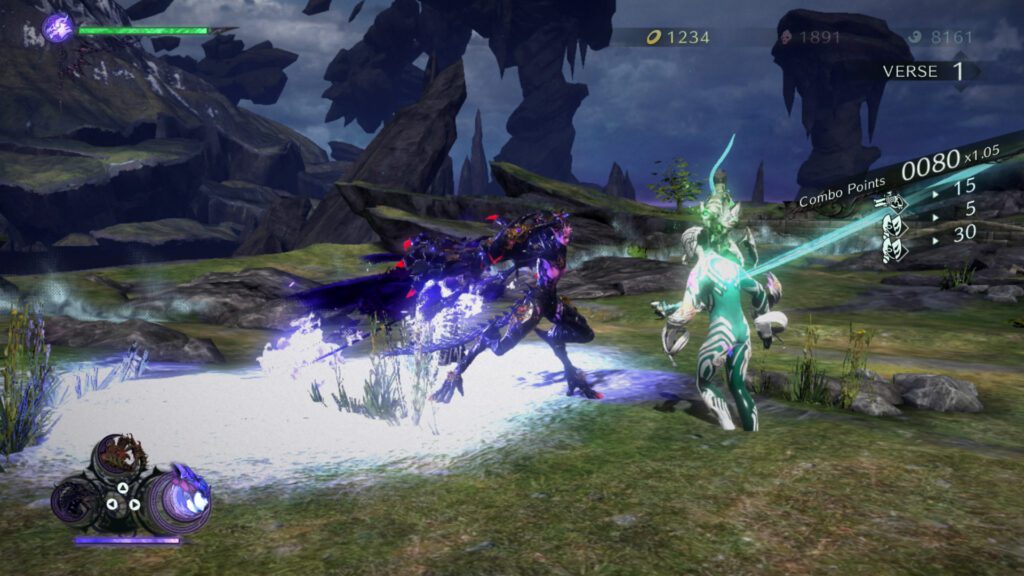 The characters are still fun and have one liners that would give most recipients emotional damage. Bayonetta is stylish, sexy, and full of innuendos (in-YOUR-endo), just the way she’s always been. She’s the one you’ll spend the most time with. Jeanne makes an appearance in three semi stealth levels as she searches for the scientist. These are not as in-depth combat-wise as the other levels but are still fun and fill in some blanks about what she’s doing.

Try To Keep Up

That brings us to the last playable character: Viola. I do not like her. In a world of classy Umbra Witches, she’s punk rock. Don’t get me wrong, punk rock has its place but in Bayonetta 3 it’s very jarring to have smart, funny, lines delivered with silky smooth voices from Bayonetta and Jeanne only to move to Viola’s screeching. It fits with her role in the story (she is a kid after all), but anytime she was on screen I just wanted the other two back.

I’m not a fan of how she controls either. Where Bayonetta and Jeanne dodge to activate Witch Time, Viola blocks with her sword. It doesn’t sound so bad, but I had such a hard time trying to find the blocking window and I would just spam block and hope that I could activate Witch Time. Viola is also limited in her attacking. While Bayonetta has several weapons to equip and Infernal Demons she can summon, Viola only has her two default weapons in a sword and darts, along with one demon. 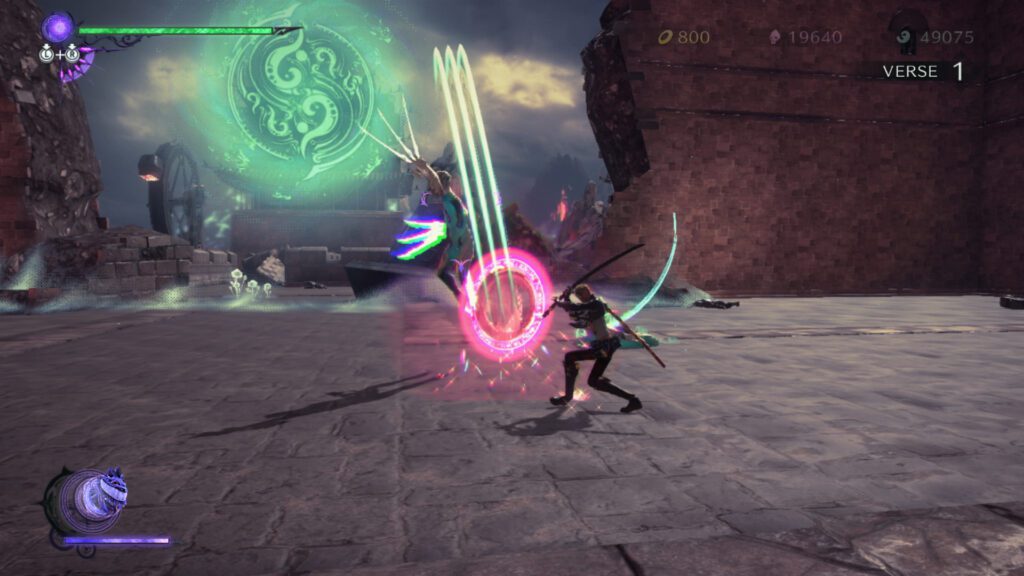 For the most part the levels are your standard hack-and-slash fair but every now and then they get a bit weird. Things like riding your unstoppable Infernal Demon as you jump over or smash your way through obstacles. Giant kaiju-like fights between your super-charged demon and a boss that basically amounts to a game of rock-paper-scissors. And a mini-boss fight that turns into a rhythm game. For better or worse they’re there but they’re just strange.

Quite The Captivating Show

But through all that weirdness I truly had a good experience. My issues with Viola aside, Bayonetta 3 is just plain old fun. Being able to summon a demon in the middle of a fight to knock your enemies for six? Fun. Watching Bayonetta dancing like she’s out on a Saturday night? Also Fun. Seeing how annoyed Viola gets when Bayonetta calls her Kitty? Very fun. 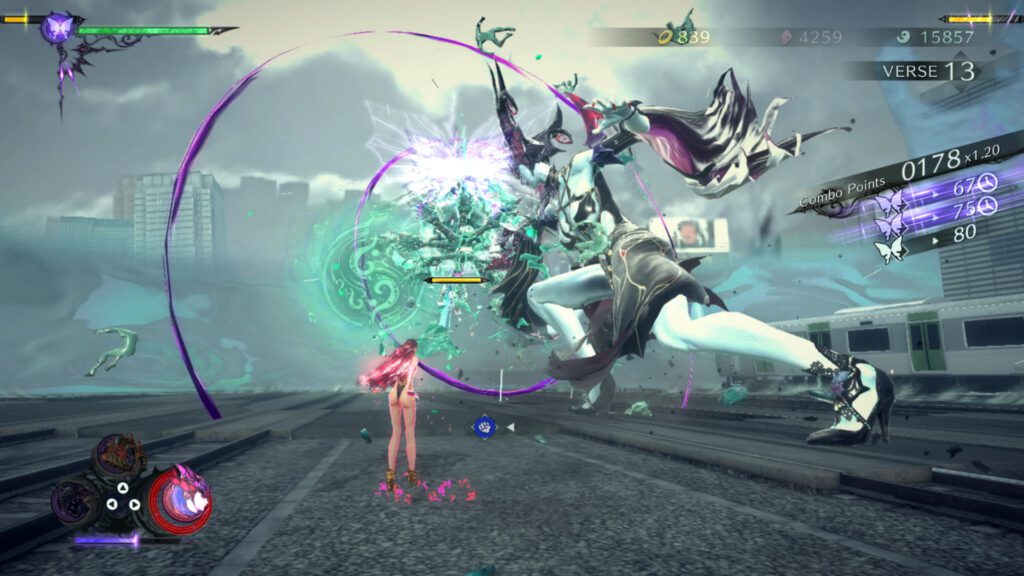 One thing that Platinum Games have done that I’d like to point out is the inclusion of the Naïve Angel Mode. Fans of the series will no doubt be aware of some of the more risqué moments that Bayonetta is known for. Naïve Angel Mode allows players to limit some of those salacious visual from view. From what I could tell it doesn’t change any of the lines though, so players will still hear all of Bayonetta’s quips.

There’s plenty to do after you finish the game for those wanting end game content. Each level has a rating system and plenty of collectibles, as well as unlockable content based on said collectibles and rankings.

I don’t remember a whole lot about the first Bayonetta’s story and I know nothing of Bayonetta 2. But Bayonetta 3 feels weaker in the story department to me. There’s emotion and heart there though, even if the key story points are pretty obvious.

Time To Be Naughty

Bayonetta 3 is more than the sum of its parts. Most of the issues I had make the game sound bad when taken in isolation. Put them all together and you’ve got yourself Bayonetta 3. It’s weird, it’s crazy, but most of all, it’s fun.

Bayonetta 3 is out now on Nintendo Switch.