Many of us have always dreamed of being an action movie star. The heroes we see on the big screen were always getting themselves into dangerous and risky situations teamed with cool explosions and death defying stunts. These situations have been replicated in many video games but don’t truly put us in the action heroes shoes. However, SIE London Studio have taken it a step further by taking all of these elements and placing them in virtual reality. The result is the latest Playstation VR exclusive, Blood & Truth. And it literally feels like you’ve stepped right into an action movie.

Blood & Truth is a first-person shooter that’s essentially an extension of the London Heist mini-game from Playstation VR Worlds. Obviously there’s more of a story to it. Still set in London, you play a former Special Forces soldier by the name of Ryan Marks whose whole family is in danger. One by one, each of them are being targeted by crime boss, Tony Sharp. Your mission is to save them and stop Tony in his tracks. Like any action movie the story is very linear with no distracting side fluff. In saying this, it’s easy to be completely distracted from the storyline by its action packed gameplay. The story does contain some engaging moments, with that said I wouldn’t describe it as memorable. Without spoiling too much, the last moments of your final mission left me thinking “oh, that’s it?” 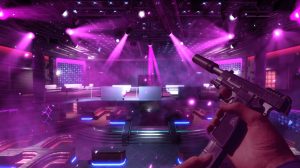 However, they’ve left the doors open for something more. A sequel perhaps? Or maybe even an expansion could be explored. I mention an expansion option since Blood & Truth offers not just action movie quality but also quantity plus a little more. Like most other VR titles on the market, Blood & Truth isn’t an overly long game. The story can be finished in 4-5 hours which is about 5 less than I had expected. There are collectable items through out which can sometimes be missed giving you some replayability to go back and collect them. The only advantage of this however, a part from the trophies, are a couple of gun upgrades.

Even though Blood & Truth comes with a short story, the gameplay is insanely fun. I spent my entire gameplay using the Move Controllers which aren’t a necessity but they do add to the fun and make the game feel more life like. The controls aren’t at all complicated. The motion from swapping and reloading weapons can sometimes feel clunky but overall flows well.

However you’re not spending the entire game holding and shooting a gun. The game trickles slightly into the adventure game genre having you jump, climb, slide and swing your way around the environments. Using the Move Controllers to do all of the actions was very cool. There were a fair few areas within the game that required to me scale buildings or slide down ropes however it never felt like there were one too many. It was fun to see actions like these added to the game to show off the immersive interactivity of VR without coming off as too gimmicky. 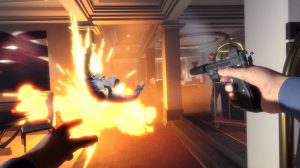 However the majority of your characters movement feels like your playing a rail-shooter, going from one set location to another. But at the same time I wouldn’t place it in the rail-shooter category, even though I was ready to firmly lock it in during the first half. Instead of just moving forward, you’re also moving from side to side and sometimes backward. Although there are set placements for your character, you still have to move from one location to the other strategically. Enemies don’t stay in the one spot either so you’re constantly on your toes checking your surroundings. There are moments particularly in the later half where I was constantly moving just to survive. And this is when it started to once again feel like a proper first-person shooter. This sort of control setup is an obvious easier option for a VR title. As much as I am for it, a more free-roaming teleport movement system would have also worked.

There were also the token action movie chase scenes which sometimes ended with jumping out a window or off a ledge. They’re fun and show off a lot cool action sequences. The rail movement during these chases however felt more like an immersive amusement park attraction than a VR experience. They don’t feel out of place but if they added in one more, I probably would of disliked them.

Blood & Truth succeeds in delivering an action packed VR experience I didn’t know I needed. It may have a short average story, but it makes up for it with its fun gunplay and interactive VR elements. Its also a convincing enough excuse to buy a Playstation VR if you’ve been thinking about it but needed a good enough reason.

Blood & Truth is available now for Playstation VR and I give it 8 out of 10.