I’ve never had the flashiest office setup, nor have I had an uncluttered desk. Instead of owning a gaming PC, I’ve opted for owning a gaming laptop. But over the years, I’ve added additional peripherals and a second monitor. Filling my average-sized desk to the point where I should have chosen a PC instead.

But a solution to both my clutter issue and my lack of RGB lighting has been brought to my attention. Bonelk recently launched a new range of laptop stands, including one designed specifically for gamers. The “Elevate” range by Bonelk includes three types of stands for various laptop sizes and office setups. Their Gamer LED model though was the obvious option for my needs.

Each of the three stands are made from premium grade aluminium, giving it a solid but lightweight feeling. What makes the Gamer LED Laptop Stand different from the others is the included RGB backlighting. There are seven different colours and three lighting modes to choose from, including a breathing effect. It also holds laptops from 11”-17”.

The Elevate laptop stands are easy to set up and ready to use straight out of the box. The Gamer LED stand obviously has a few extra instructions on setup, as it has built-in RGB lighting underneath. But this is where I had a bit of an issue.

A micro-USB cord is also included, however the cord is shorter than expected. If you don’t have anything longer lying around, your only option is to use up one of your USB ports. Or use the included USB-C attachment if your laptop also has an outlet for that. And as I’m using all of my USB ports already, the latter was my best bet. But that’s if the attachment actually worked. Luckily, I found a longer cord laying around which I plugged into the wall. 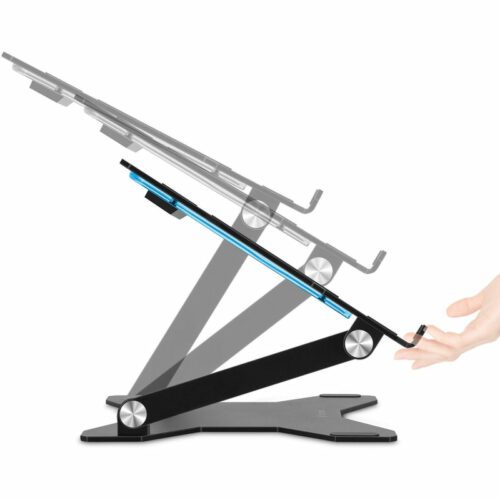 Short cords aside, now that I’ve my laptop stand setup, my desk feels so much cleaner. I haven’t had to move my keyboard off the desk once. Which was always happening  pre-stand. The RGB lighting isn’t as obvious as my other RGB peripherals during the day, but by night it becomes a beautiful edition to my somewhat basic setup.

My advice though is to not push down on or close your laptop with too much force. The stand is able to hold my somewhat heavy gaming laptop with ease, but also has the ability to fold down much easier. And unfortunately has no way to lock the stand in place. I wouldn’t suggest the Elevate if you’re in the market for a laptop stand but don’t have an additional keyboard.

From my personal experience though, The Bonelk Elevate Gamer LED laptop stand has become a game changer. No pun intended. It’s brightened up my setup as well as allowed me to work and game in an uncluttered environment.

The Bonelk Elevate Gamer LED Laptop Stand, as well as the rest of the Elevate range, is available from JB Hi-Fi.