Earlier this month we covered all the Borderlands 3 gameplay details we know so far straight from the event in Los Angeles. But what we saw was just a fraction of what Gearbox and 2K Games has in store for us. More Borderlands 3 details will be spread across multiple events before the game drops on September 13 including this years E3.

The event is happening from June 11-13 in L.A. but Gearbox has kept very tight lipped about what’s in store. As expected there’s already been rumours flying around about what we’ll see yet the biggest one isn’t even about the upcoming sequel. There have been whispers of a new Borderlands 2 DLC which is meant to drop during E3. This is far from unusual even though the game came out back in 2012. 7 years later, Borderlands 2 still has around 1 million players per month. 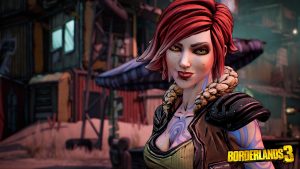 The rumoured DLC is apparently going to be titled “Commander Lillith and the Fight For Sanctuary” according to Playstation Lifestyle. As the title suggests, it would essentially act as a bridge between the two sequels. Where abouts the DLC sits within the 5 year gap between 2 and 3 is uncertain. It’ll be interesting to see what exactly the DLC will cover storywise. Hopefully we get to see the introduction to the Sanctuary 3 spaceship and the Children of the Vault cult being run by new antagonists, The Calypso Twins. Hopefully it also explains another big question…where’s Salvador and Axton? So far we’ve only seen two of the original Borderlands 2 vault hunters, Maya and Zer0, within the Borderlands 3 reveal footage. Whether we just haven’t seen them yet or something else has happened to them is undetermined.

With little other information about Gearbox’s plans, we can only guess what else will come. So far we’ve only seen two of the four new vault hunters, a handful of the billion odd guns available, new gameplay mechanics and a couple of the new planets in depth on top of glimpses of others. Showcasing more planet exploration is definitely a possibility. It’s also very likely they’ll showcase either one or both of the other two vault hunters, Moze and Fl4k, like they’ve already done with Zane and Amara at the gameplay reveal event. Having them interact with more of the new NPC’s and even go up against some of the newer enemies would be cool to see as well.

Keep your eye’s on our website during E3 as we’ll bring you more information on Borderlands 3 as it comes.