THE second part of the Season Pass 2 DLC content for Borderlands 3 was explained in greater detail on the most recent episode of The Borderlands Show. Directors Cut was announced that it will launch on March 19 and includes end-game content, cosmetic items and behind-the-scenes goodies.

A new raid boss called “Hemovorous the Invincible” headlines to Director’s Cut where vault hunters will face the Varkid. A creature who’s been locked away in Pandora since the launch of Borderlands 3. The other playable content made available in Director’s Cut are a series of new murder mystery missions featuring young Ava. Ava has started her own murder mystery podcast and you’ve become her co-host. Using a new crime scene analysis mechanic, you and Ava will investigate supernatural slayings in Pandora, Promethea, Eden-6 and Nekrotafeyo. Both the raid and murder mystery missions will reward vault hunters with new gear. 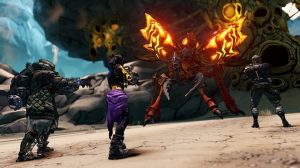 A plethora of new cosmetic gear is also going to be added via what’s called Vault Cards. Starting from March 19, Vault Cards will reward you with new heads, skins form both vault hunters and weapons as well as legendary gear. These can be obtained by completing daily and weekly challenges. Vault Card #1 will be available from launch of the Director’s Cut with the other two Vault Cards being made available later in the year.

For those interested in what went on making Borderlands 3, the Director’s Cut will also contain never-before-seen behind-the-scenes footage featuring bloopers, cut content, concept art, storyboards, lost maps and other footage from the games developement.

The Director’s Cut will be available for Season Pass 2 owners but can also be purchased seperately.