Over the weekend we were given more Borderlands 3 information via the Gearbox Main Theatre Show at PAX West.  A stack of endgame content and DLC is already scheduled over the next 6 months to bring us even more mayhem after finishing the main story campaign. True Vault Hunter Mode was announced to be making a comeback as well as the new Mayhem Mode. Mayhem Mode offers 3 difficulty levels which not only ramps up the difficulty of enemies and raises the rewards but also applies modifications, or Mayhem Mods, to each planet you visit. For example enemies might take reduced damage to normal ammo but take greater damage from elemental types if you get the mod “You’re A Wizard.”

Badass Rank has also been replaced by Guardian Rank and works almost the same. As you gain XP, your Guardian Rank bar also fills up and grants you a token for each fill. These tokens can be placed into one of three trees which build up stats for your Vault Hunter. From what I’ve seen during my hands on, Guardian Rank will only become available once you’ve finished the main story campaign.

As we’ve previously reported, Circle of Slaughter and the new Proving Grounds will also be available for even more sweet sweet loot once you’ve finished the main story. For even more info on all the Borderlands 3 endgame content, click here. 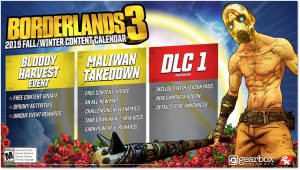 Big news was also announced for Borderlands 2 VR with the Bad Ass Mega Fun (BAMF) DLC pack launching for Playstation VR on September 6. 16 pieces of DLC content will be available for FREE! Not only that, more info on the launch the PC version of Borderlands 2 VR has been announced. The PC version, including the base game and all of its DLC, will be launching by the end of the year.