FOR the very first time in Borderlands history, vault hunters will be able to play together across multiple platforms. A free update has launched today for Borderlands 3 featuring an increase in level cap, the launch of the next seasonal event and, finally, enabling crossplay. However, not all platforms will be getting this long awaited feature.

Crossplay for Borderlands 3 will be available on Steam, Epic Games Store, Mac and the Xbox One/Xbox Series X|S. Unfortunately, Playstation 4 and Playstation 5 users miss out on playing with friends who own the game on other consoles. This comes after news last month that cross-play will not be added to Sony’s line of consoles. In a tweet by Gearbox CEO, Randy Pitchford, it was announced that “(Gearbox) have been required by the publisher to remove crossplay support for Playstation consoles.” 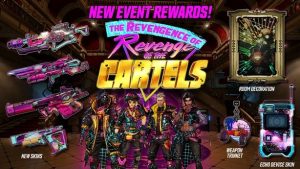 While Playstation users miss out on the headlining update, there’s still a bunch of new features to look forward to for past and current players alike. The level cap increase, for example, is a fair excuse to jump back in to max level your characters to 72.

The new seasonal event, Revengence of Revenge of the Cartels, marks it return of Joey Ultraviolet and the Eridium Cartel. Eliminate Cartel Operatives to gain Hideout Coordinates which will give you access to the showdown at Villa Ultraviolet. As always, a plethora of new rewards are up for grabs just by participating. Seasonal events, along with their rewards, will also be made available for the first time all year round. This can be turned off and on from the main menu and allows you to relive past boss fights as well as earn rewards from both Year 1/Year 2 events.

All six True Trials will also be live in-game from now until 1:59AM AEST on July 2.