2K and Gearbox have confirmed that the free Borderlands 3 next-gen upgrade will be ready from Day 1 for both Xbox Series X|S & Playstation 5 launch days. Running at 60 fps in beautiful 4K, this will be the best Borderlands 3 has ever looked on console as it’s been fully optimized for next-gen hardware.

“Borderlands is a ground-breaking, record-setting, critically acclaimed franchise where millions upon millions of gamers have experienced one-of-a-kind gameplay, mayhem, and fun across multiple generations of gaming technology,” said Randy Pitchford, Executive Producer and Founder of Gearbox Entertainment. “With Borderlands 3 continuing to grow and launching this November on next-generation PlayStation and Xbox consoles, there has never been a better time to jump in and join the fun.” 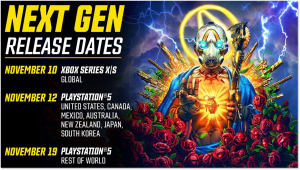