It’s been almost a year since Borderlands 3 was announced at last years Gearbox Main Theater Show and PAX East and this years show has brought more exciting Borderlands 3 news. The biggest announcement being the launch of Borderlands 3 on Steam on March 13 after being an Epic Store exclusive since launch. Existing Borderlands 3 players on Epic will also be able to cross-play with friends who own the game on Steam. At this time that includes adding people to your friends lists and playing co-op with future plans to enable sending weapons to friends.

And now for the big event, SPOILER ALERT but Sir Alistair Hammerlock and Wainwright Jakobs are getting married. And you’re invited to their nuptials in Borderlands 3’s 2nd DLC, Guns, Love, and Tentacles: The Marriage of Wainwright & Hammerlock. The big day is being held on the icey planet of Xylourgo, in Cursehaven to be specific. Of course there’s a catch, it’s located above the carcass of a fallen Vault Monster. Worshipers of said Vault Monster however want to stop this wedding from happening. But with the help of an old friend you put a stop to these occulists. Gaige and her trusty robot BFF, Deathtrap, join you for the ride. Unfortunately Gaige is only an NPC this time around. Also included in this DLC: 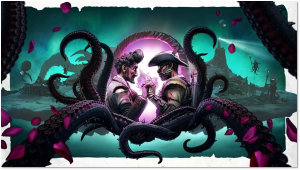 Guns, Love, and Tentacles: The Marriage of Wainwright & Hammerlock is available March 26 and is included with the Borderlands 3 Season Pass, Super Deluxe Edition and sold seperately.

During the Gearbox Main Theater Show both Gearbox and 2K covered all things Borderlands 3 happening in 2020 including Mayhem Mode 2.0 and the Revenge of the Cartels seasonal event, both available in April. Guardian Takedown, which is the 2nd raid mission made available launches in May and comes with an even more challenging mode called True Takedown Mode. Lastly, before the 2nd DLC is even out, there was also a sneak peak at the 3rd DLC for Borderlands 3 which will involve “outlaws and dinosaurs.”

Click here to catch up on the rest of the PAX East panel which also includes chats Eli Roth about the upcoming Borderlands movie.