“We see Borderlands Science as an opportunity to use the enormous popularity of Borderlands 3 to advance social good,” said Gearbox Software co-founder Randy Pitchford. “Borderlands Science is the vanguard of a new nexus between entertainment and health: an innovative game-within-the-game, complete with scores, progression and rewards, where your playtime actually generates tangible data that will be applied toward improving research, helping cure diseases, and contributing to the broader medical community.”

Trillions of microbes inhabit the human body – some of which may be associated with conditions like inflammatory bowel disease, diabetes, autism, Parkinson’s, Alzheimer’s, cancer, obesity, allergies, and more. Mapping these microbes will help scientists better understand them and provide an important foundation for future microbiome studies that may lead to more sensitive diagnostics and personalized treatments. However, because of the number of microbes, computers struggle to relate them, which makes mapping the gut nearly impossible.

This is where Borderlands Science, a mini-video game within Borderlands 3, comes in. Leveraging the massive breadth of the video gaming community, the project crowdsources players’ skills and applies them to mapping the human gut biome, saving medical researchers hundreds of thousands of hours in training computers to do the same. 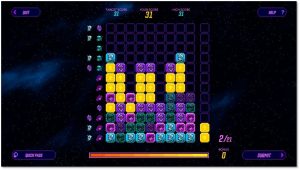 Borderlands Science encodes the DNA of each gut microbe as a string of bricks of four different shapes and colors. Players connect those colored shapes to help scientists estimate the similarity between each microbe. The more puzzles players solve, the more they help decode the human gut microbiome, all while earning rewards that can be used in Borderlands 3.

“We are always looking for new partners in the field of gaming, and this is a perfect fit for us,” said MMOS CEO and co-founder Attila Szantner. “We created MMOS to connect scientific research and video games as a seamless gaming experience, and that is exactly what this has become. I believe that Borderlands 3 players advancing microbiome research will change how we think about video games.”

“It was a simple choice to join Gearbox and its partners in making Borderlands Science a reality,” said McGill University professor Jérôme Waldispühl. “Working to help align the gaming community with the biomedical field allows these two passionate groups to work together toward a result that we might not realize without the collaborative effort.”