Call of Duty Championship Round Up 2022

Lights, camera, GAME! It has been a huge week for E-sports as the 2022 Call of Duty League season reached it’s pinnacle on August 4-7.

The top eight league teams took the stage live at the Galen Center in Los Angeles for Championship Weekend – and with $2.5 million US in prizing up for grabs, you best believe it was going to get sweaty.

To qualify for this phenomenal experience, each of the eight teams were seeded into the bracket based on the CDL Points they’ve earned throughout the year at each of the four major events.

The top two teams at the end  battle in a best-of-nine series on Call of Duty League Championship Sunday for US $1.2 million in first-place prizing and the championship trophy. The eight teams that qualified this year were the Atlanta FaZe, OpTic Texas, Los Angeles Thieves, London Royal Ravens, Seattle Surge, Boston Breach, Toronto Ultra and New York Subliners.

For anyone watching the event live, every game was as “clutch” as the next and some pairings made for for different advantages which was nail-biting to say the least. OpTic Texas seemed very strong up until they faced Seattle Surge, however I do wonder if OpTic Texas faced the Los Angeles Thieves in the final, the result may have been different. The grand finals were held on Sunday August 7th where Los Angeles Thieves went head to head with Atlanta FaZe. Los Angeles came out with a victorious win 5-2. 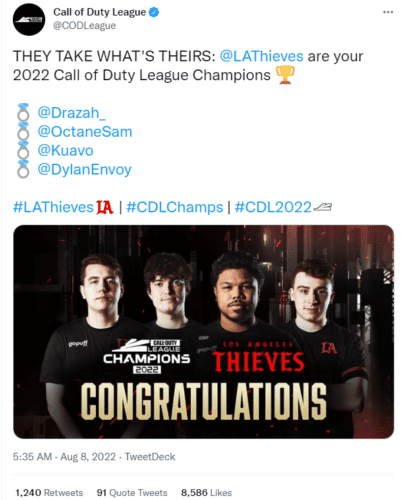 The L.A. Thieves were most recent Major champions however there was much competition. The team they faced in the grand finals of Major Four, the New York Subliners, had a marvellous turnaround just to qualify for the CDL postseason. And the Atlanta FaZe, who won CoD Champs 2021 were hopeful in repeating their previous victory for a second year in a row. Regardless, all teams showed up gave it their best, and I am sure all Call of Duty fans are excited to see what comes next in the coming qualifying season and in the release of Modern Warfare II.