Call of Duty: Vanguard – The Review

It’s been four years since Call of Duty used World War II as a backdrop. And depending on who you ask, CoD: WWII was either a great game or a terrible one. Personally I enjoyed it. We had just come out of the Infinite Warfare era, and around that time was when CoD was full of wall running and exoskeletons. But I’m a simple guy who likes his multiplayer first-person shooters without the gimmicks.

WWII felt very different at the time from what Call of Duty had delivered in recent years. From the player hub through into the battlefield in regards to its locations and weaponry, the overall feel succeeded in taking you back to that era of basic gunplay.

Four years on and we return to the World War II era in Call of Duty: Vanguard. And I must admit, it didn’t have the same impact on me as Call of Duty: WWII. There were some surprising positives but some unexpected negatives across the board. This was also the first Call of Duty in god knows how many years where I played the campaign. While I didn’t hate it, I thought more could be added to it. 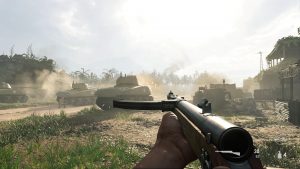 Vanguard’s campaign starts in Hamburg, Germany. It’s 1945 and the war is coming to an end. You’re part of a small team of soldiers from different continents on a mission to steal top secret intel from the Nazi’s. However it’s pretty obvious that opening with an infiltration mission means it’s going to instantly be foiled. And foiled it was.

While being imprisoned, the focus turns towards each of the soldiers and their history with the war. Some of the origin stories were more interesting than others, such as Paulina Petrov’s story as a young Russian sniper fighting for revenge after the death of her father. But for the most part they mostly showcased different styles of gameplay and gunplay. From the already mentioned sniping, to commanding other soldiers and flying fighter planes. It definitely succeeded in breaking things up throughout this somewhat short campaign.

But like I said, I’m not the biggest campaign player when it comes to Call of Duty. There’s nothing about Call of Duty campaign modes that gravitate me towards them, and the same can be said about Vanguard. The campaign is very linear with plenty of scripted events. Something else needs to be added to make it more interesting or give it some sort of incentive.

Each soldier in your squad is an operator found in Multiplayer and Zombies. Some extra XP towards those included would be nice, even weapon XP as well. It wouldn’t fix the campaign entirely but it’d give it more of a reason to play. 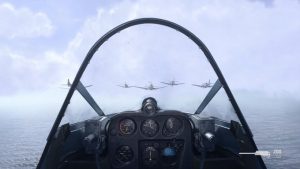 Like most other players, Call of Duty for me is all about the multiplayer. Mainly Hardcore Domination and Hardpoint on the rare occasion. But in Vanguard, it just didn’t slap like it used to.

Multiplayer didn’t feel fresh or new in Vanguard. I didn’t play Cold War but I owned the 2019 Modern Warfare. And I was surprised that it looked pretty much the same right from the menu screen. Not only that, some of the maps had been recycled and didn’t seem as visually polished as the campaign. It kind of looked like I was playing it on my OG Xbox One even though I reviewed this on Playstation 5.

Domination and Hardpoint are usually all I play in Call of Duty. I’ve never been a big Zombies player and have only lightly dabbled in the previous one and back in Black Ops II. However, that all changed in Vanguard.

!SPOILER ALERT! Whether or not this is going to be future campaign content, historic facts or it’s just a connection to the Zombies mode is uncertain. But the topic of Nazi’s resurrecting the dead was brought up at the very end of the campaign.

While playing Zombies and watching said ending, I couldn’t help but wonder, what is the obsession with Nazi zombies? We’ve seen these character in multiple games. Ever since the grand-daddy of first-person shooters in Wolfenstein 3D, right right up into this generation with the Zombie Army series. 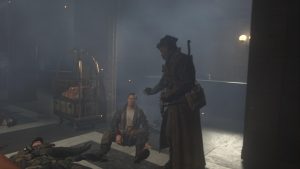 So why the hype? Well apparently Nazi’s might have practised reviving the dead back in the day. There’s way too much info to cover on this, but you can find an article here if you want to learn more about the theory of Nazi zombies.

Zombies mode is hands down the the most fun I’ve had in Vanguard. It reminds me of a rogue-like game as you’re offered different load-out choices, perks and abilities with random drops and weapon gambles/upgrades. I’ve tried to make most runs different and play around with perks to create different play styles. My current obsession though is shotguns and matching it with a perk that deals more and more damage to an enemy the more you shoot it.

The central player hub is a constant danger zone with zombies lurking around every corner. But Zombies main focus are the multiple portals that spawn, each with different objectives. Everytime you complete an objective, the difficulty becomes harder and more and more zombies run rampant once out of the portal.

There was worry that it would become repetitive and I’d get bored with playing with perks. But the addition of a new objective and perks, thanks to the most recent update, has taken away any worry of boredom. Vanguard Zombies is stressful and chaotic but a lot of fun at the same time, especially if you’re playing with friends.

I wouldn’t say Call of Duty: Vanguard was totally disappointing, I’d rather say it was fun for different and unexpected reasons. While I won’t be writing home about the multiplayer aspect, I will be giving high praise for the Zombies. The campaign is an ok play for the story, but that’s all it can really offer apart from allowing players to sample different weaponry.