Genre hybrids in video games have become the norm these days. We have RPG’s mixed with first-person shooters, RPG’s mixed with puzzle games, basically a lot of games with RPG elements. It’s something that goes with almost anything, like ketchup or peanut butter. Both of which are also a large part of my diet.

RPG’s are a genre I love to invest in, in some aspects more than others. I’m known for being quite a gear hoarder in most RPG’s I play. The gear build aspect is my favourite part to dabble in though. Mixing and matching gear to suit your playstyle and the sort of build you’re aiming for is a lot of fun.

Elder Games takes a generous side portion of this RPG element and serves it up with a collectable-card battling system. The end result is Cardaclysm: Shards of the Four, a sometimes punishing and somewhat grindy rogue-like that spins a new twist on dungeon crawlers.

Cardaclysm: Shards of the Four is presented like a dungeon crawler ala Diablo, Path Of Exile, etc. The lore behind it is that a dark wizard has accidentally unleashed The Four Horsemen of the Apocolypse. But it’s quite easy to overlook this as there aren’t a whole lot of story elements to it. Progressing through Cardaclysm, you’ll navigate through multiple randomly generated dungeons (or in this case, Realms) multiple times over. While doing so you’ll bump into many different creatures as well as a boss who chases after you once you clear the realm. 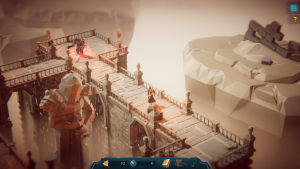 But unlike traditional dungeon crawlers where you use abilities and fight in real time, Cardaclysm uses a collectable card battle system when it comes to combat. Similar to Hearthstone and Legends of Turerra, cards are collected during your adventure to form a deck which you’ll use to battle packs of creatures. But don’t expect to watch the usual cards hitting cards animations when it comes to battle. Instead you get to watch fully animated creatures battle each other which at times makes for some explosive combat.

You’ll find yourself repeating this process of clearing realms and avoiding bosses over and over again until you’re “strong enough” to stop running away. As this is a rogue-like game, this sort of behaviour is expected. However I eventually found myself not even being strong enough for the regular enemy encounters I was facing.

Like any other card game, building the right deck is vital in progression. There are five different factions who work in harmony when grouped together and can strengthen your decks power. At times it might feel like there’s a right and wrong faction to use. Which was a big mood during these road blocks I was facing. At first I was adamant that this was due to a broken difficulty system. I started asking myself, “If this realm is set to normal difficulty, than how the hell am I expected to clear a Challenge or Insane difficulty realm?”

But this wasn’t about being too hard and more so about playing around with decks and builds. For half of my 60 hours in-game, I felt as if I was playing favourites with what I felt comfortable playing with or what felt the strongest at the time. It then reached the stage where I felt extremely defeated. I’d already farmed a large collection of cards but nothing seemed to work. And the cards that trader NPC’s were offering were an absolute joke as they kept trying to sell cards of much less value.

During my time with Cardaclysm I think I found no more than half a dozen good deals. And I visited these traders many many times. In saying this, I was able to trade all of my unwanted cards for another form of currency to spend at a different trader with Cardaclysm’s central “hub” located at a pub. But for the most part his wares weren’t too enticing either.

Eventually I knew that I had to play strategically, I started putting what worked best in the “too hard” basket. This was because juggling between factions and decks was tedious and fiddly. I wasn’t impressed that I couldn’t “favourite” one or more decks. It would of made strategic jumps between decks not only less frustrating but also a lot less time consuming. This also applies with the gear selection. 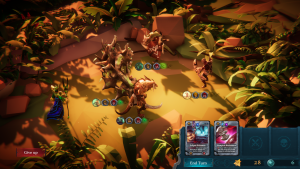 Gearing your character up is what drew my attention towards Cardaclysm in the first place. As previously mentioned, upgrading stats/capabilities through gear management is right up my alley. How this works in Cardaclysm though has more to do with matching with your current deck rather than stat upgrades. While some gear is versatile with most factions, the majority of it is faction specific. I like how you have to sometimes be strategic in how you approach certain enemies but the gear/deck management (or lack there of) could have been improved.

As I started to build my card/gear collection while learning enemy strats, I’d fly through most fights and the four bosses. However it’s the final part of the game that caused some fatigue. Through out I’d already noticed Cardaclysm’s heavy repetition, mostly through it’s small variety of realms and partially within combat. While there were times you had to change strats, each fight felt mostly the same.

Facing the final boss works a little differently to the others. Instead of going through half a dozen or so realm runs before the big fight, the final boss requires you to collect 60 keys before being allowed to face them. Higher difficulty realm runs offer more than one key, however said difficulty was already a headache to deal with. Even with a pretty powerful build I only had one successful “Insane” difficulty run. Apart from the higher rate of keys, the higher difficulties didn’t feel as overly rewarding as expected the further you progressed as a whole.

It was similar to how I felt approaching the trader NPC’s. Usually you’d expect NPC’s or a reward system of this nature to have wares that you either wouldn’t find in the wild or something of high rarity. And if you have the right amount of coin or luck, it can be yours. But once you reach a point in Cardaclysm, particularly during the final end game-esque stage, that excitement and expectation disappears. Once you reach a level of strength, it’s up to how you play the cards that will help you win. In saying this, there is a small handful of cards that hold a lot of potential with the right strat and build towards the end. And I’m talking an insane amount of power when played right, but only against the right opponents. Don’t get me wrong, I do like the idea of not being able to rely solely on strength and more so on strategy. But I also feel conflicted in wanting to unlock a whole lot more.

Being a rogue-like, its repetitive nature can be expected but by the end I felt like it was dragged out a bit too much. It’s in-game inventory/card management could also do with some work as well. Aside from that, Cardaclysm: Shards of the Four is an interesting twist on collectible-card battling games with some fun game elements. It just requires some tweaking before being considered perfect.

Cardaclysm: Shards of the Four is available now on Steam.