“Right now is the most accessible Civilization has ever been”

Since 2016, Sid Meier’s Civilization VI has greatly evolved in particular over the last year. After the initial release on PC it’s had two expansions, many DLC add-ons and launches on both iPad and most recently the Nintendo Switch. The latter was my first experience with Civilization VI and ultimately the beginning of an addiction. With the Switch’s versatility I was having One More Turn everywhere, especially in bed before falling asleep. Which I did a lot of with the Switch still in hand. With Civilization VI being released on the handheld console, it was inevitable that a release for the Playstation 4 and Xbox One was bound to happen. What’s even better than a wider console release is the added access to all DLC content and both expansions which shifts the gameplay to even greater levels.

For those unfamiliar with Sid Meier’s Civilization VI, this is a game that’s all about building an empire to its greatest potential. To achieve victory you must reach great success in one of the multiple fields before other civilizations within 500 turns, whichever comes first. It’s strategic, sometimes stressful and addictive gameplay that, like my own experiences, will have you putting everything around you on pause just so you can have One More Turn. And these games can sometimes be very long. Mine last many hours and before you know it, it’s 2am. Releasing a game like Civilization VI on home console is perfect. Sitting at a desk while taking over the world is sometimes comfortable but it’s even comfier when you can do it in a recliner. As strategic as it is, Civilization VI in my opinion can also be a chill wind down game as well. It can also be played with friends which will test who the alpha of the group really is.

Having already written about Civilization VI on Nintendo Switch I already knew how it would play on console instead of Civilizations native PC setup. What more can I say, it plays the same if not almost better than using a mouse. That may sound biased because I’m mostly a console gamer. I do however have strong PC roots from my younger years so I’m pretty versatile in that sense. However it does surprise even myself that I would prefer to use a controller over a mouse. Especially with a game that’s originally made for PC. 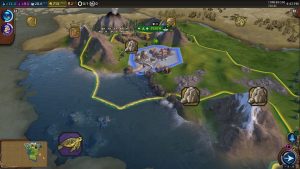 Moving around the map and performing actions is just as fluid. The UI is even more user friendly with most menus and actions being accessible with the press of a button. Though there was a moment where I wanted the UI to be sized down just slightly. In saying this there is nothing wrong with how it’s scaled. This is just me being used to playing on PC and said roots starting to kick in. Of course, this was unachievable on console with the exception of the mini-map, which is an option that still confuses me. I do like a minimal UI that isn’t in your face. But in fairness the size is perfect for a TV screen. It also does a better job than the Switch version which has an even larger UI while both docked and undocked.

Graphically the Playstation 4 version looks better than the Switch and almost on par with PC. Although the cities and environments look better from afar than they do up close. However I couldn’t help but zoom in and watch turtles swimming around the reef for a brief moment. For me that was one of the more beautiful visuals of this game. The only real graphical issue I’ve come across is when too much is happening at once on the screen. Camera movement becomes slightly sluggish when moving across built up areas. There were also a few moments where audio was a bit static for a second if I was in certain spots during the beginning of other players turns. Whether or not this is because of my OG Playstation 4 model is uncertain. This issue however definitely doesn’t deem it unplayable or less enjoyable. 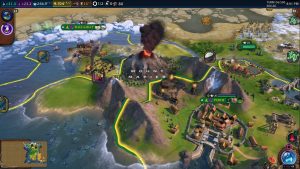 What makes Civilization VI’s wider console release so good is its access to both of its expansions, Rise & Fall and Gathering Storm. This is the first time outside of it’s PC release that players can not only play both expansions on Playstation 4 and Xbox One but also on the Nintendo Switch. Of course these add-ons do come at an additional price and are digital only. However I highly recommend purchasing the bundle as it creates the ultimate Civilization VI experience. Gathering Storm is the largest of the two expansions creating game changing events and introduces new mechanics as well as new Leaders. Natural disasters, global warming and world congress meetings are some of the new mechanics that truely make Civilization VI shine. One in particular definitely hit close to home during my time reviewing it on PS4. Playing as Australia, Sydney was one of eight cities under my belt. However it was unfortunately hit multiple times with dry winds and drought. Of course this caused sections of the city to burn. Being quite the coincidence it was a reminder of how unpredictable of a bitch mother nature can be. To make matters worse, multiple of my coal power stations were causing global warming effects. Without getting too political, it’s an eye opener of what’s to come of things don’t change. Ironically these new mechanics do make for a more fun and enjoyable Civilization experience that will constantly keep you on your toes.

Right now is the most accessible Civilization has ever been and is the perfect opportunity for gamers of all platforms to try it out. Sid Meier’s Civilization VI is out now for Playstation 4 and Xbox One as well as Nintendo Switch and Steam with expansions/DLC available in their respective stores. I give this a 9.5 out of 10.