The Oldest House still has its fair share of secrets that weren’t uncovered in last years supernatural action-adventure Control. The Foundation is the first of two expansions for the critically acclaimed title by Remedy following immediately after the events of the base game. This time Federal Bureao of Control director Jesse Faden must go where only few have gone and even fewer have returned. Before I continue on I’m about to touch base on plot points from the base games ending as simple as I can. Understanding what happens can be a tad confusing and requires full prior knowledge of story elements. You’ve been warned.

After ex F.B.C. director Trench’s Hiss-induced suicide is explained, Jesse Fadens brother Dylan has been freed from the hands of the same supernatural force. Dylan is now back in his cell deep in a coma. The projector that was used as an Object of Power letting in The Hiss has also been switched off. But that doesn’t mean it’s business as usual for those at F.B.C. HQ aka The Oldest House.

Jesse is summoned to investigate the unusual activity coming from deep in a restricted area known as The Foundation. It’s there Jesse discovers that The Foundation houses The Nail, a conduit between The Oldest House and an other world reality previously introduced in Control called The Astral Plane. What brings Jesse to The Foundation is the damage that’s been done to The Nail, bleeding the alternate world into theirs. On top of this there’s still even more Hiss activity to deal with as shutting the projector off didn’t eradicate The Hiss for good. Jesse must find out what brought on the damage to The Nail whilst repairing it before The Astral Plane consumes The Oldest House entirely. As a continuation of the story it didn’t feel like it was told in great depths like the base game. While it doesn’t come across as strong, the plot is still expansion worthy giving us just enough of a Control fix until the next expansion comes out later this year. The Foundation also follows in the tradition of Control with its plot twists, leaving me guessing until the end. 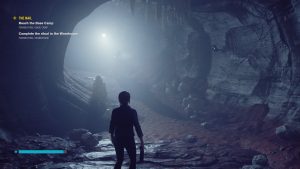 While Control spends most of its time in the upper floors of The Oldest House, The Foundation is spent mostly underneath. There isn’t as much floor space to cover but The Foundation still offers a large area of previously unseen environment to traverse which barely repeat on itself during its 5-6 hour campaign. Finding your away around feels a lot easier than in the base game for this reason as well. Control isn’t known for it’s easy to use navigation. I got lost on a few occasions during my time navigating the upstairs of The Oldest House. The Foundation however has spread its objectives out into different sections and made traversing to each feel more linear. While a lot of the areas aren’t visited more than once, apart from the central hub area, there’s a lot of cave going on. The first thing that comes to mind while exploring the cavernous surroundings in The Foundation was Red Velvet Cake. Which is no surprise as I love food almost as much as I love video games. It was the abundance of red sand against white rocks which brought the delicious thoughts to mind. However this does get broken up by a couple of familiar looking environments. As per the story, Jesse also returns to the Astral Plane. Without spoiling anything we get to spend a lot more time here at a much larger scale. While it wasn’t anything new this was probably one of my favourite areas in the expansion. Not for its environment but because of of how I was able to use abilities both old and new to get around.

The Foundation not only expands on the story but also Jesse’ supernatural abilities which build off of her earthy surroundings. Using large crystal formations, these introduced new tactics in combat against some of the newer and more dangerous enemies offering both offensive and defensive capabilities. Out of combat the crystal formations also help Jesse reach platforms and destroy barriers that she previously couldn’t of. The introduction of these new abilities has kept combat and movement feeling fresh throughout. 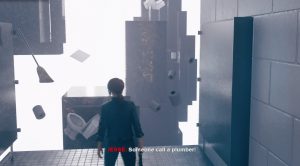 While I was sad there wasn’t a new weapon form introduced, a plethora of new weapon mods were made available along with a new mod level. But it comes to no surprise that I stuck with what I had already experimented with in the base game while also hoarding as many different mods as I could find. This isn’t to say you shouldn’t play around with them. I never felt the need to in The Foundation as much as I did in the base game but swapping around mods can make a world of difference in certain situations and can cater for multiple play styles. Combat is a little more fast paced this time around with even quicker Hiss rangers to dodge. While I already purchased my fair share of skill tree nodes, I still found myself struggling towards the end the expansions campaign. But I didn’t just find frustration In this. The difficulty level by the end of my base game run felt pretty easy. I was actually satisfied that The Foundation gave me a balanced level of difficulty through out. Not only that but it delivered an earth shattering final boss fight that Control didn’t give us the first time around. It’s safe to say the combat is still my favourite gameplay element. The mixture of both your weapon and abilities provides so much tactical versatility when approaching fights. And it’s a lot fun being able to levitate around the battlefield while throwing projectiles at enemies.

Continuing to deliver more of the elements I fell in love with during my time with Control, The Foundation is a successful continuation to the base game. I also highly recommend Control to anyone who is yet to play it themselves.

The Foundation is available now on Playstation 4, Xbox One and PC for both Deluxe Edition and Season Pass owners of Control and can also purchased separately. I give it a 9 out of 10.