“Crackdown 3 has taken the best elements from the first two games and combined them into a very polished and engaging world to explore.”

Crackdown 3 is an open-world third-person action shooter developed jointly by Sumo Digital Ltd and Elbow Rocket and published by Microsoft Studios for the Xbox One, and it’s the first Crackdown game to grace Windows 10 PC’s via Xbox Play Anywhere. With the recent announcement that Microsoft Studios will now be known as Xbox Game Studios, perhaps this is one of the last games where we’ll see the use of this logo also. 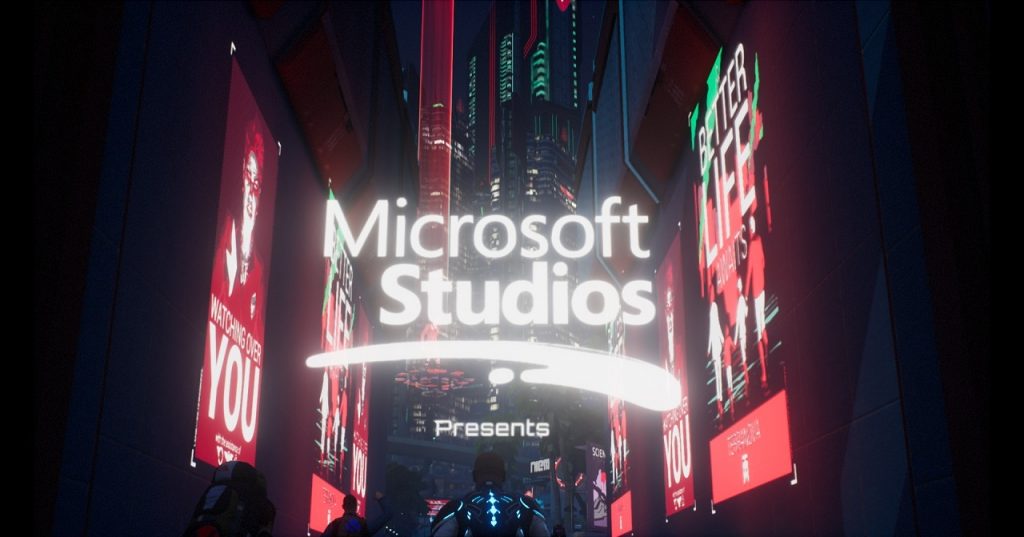 After first being announced way back at E3 2014 and suffering a few development delays over the years, Crackdown 3 will release worldwide on February 15, 2019. If you’re an Xbox Game Pass subscriber, you will be able to download and play on release day, so chalk up another great reason to get Game Pass! At present you can also download and play the original Crackdown through Xbox Backwards Compatibility, you’ll find it’s also been Xbox One X enhanced.

As a quick recap, especially for players new to the series, the first two Crackdown games were released on the Xbox 360 in February 2007 and July 2010 respectively. Crackdown 1 stood tall amongst other open-world sandbox games on the Xbox 360 such as Just Cause and Saints Row, and added superhero gameplay elements such as high-tech vehicles, weapons and armour to compliment the genetically enhanced Agents. The premise of the first game is criminal gangs have taken over Pacific City and a secret organisation, known as the Agency, tasked Agents with eradicating the gang leaders and restoring order. 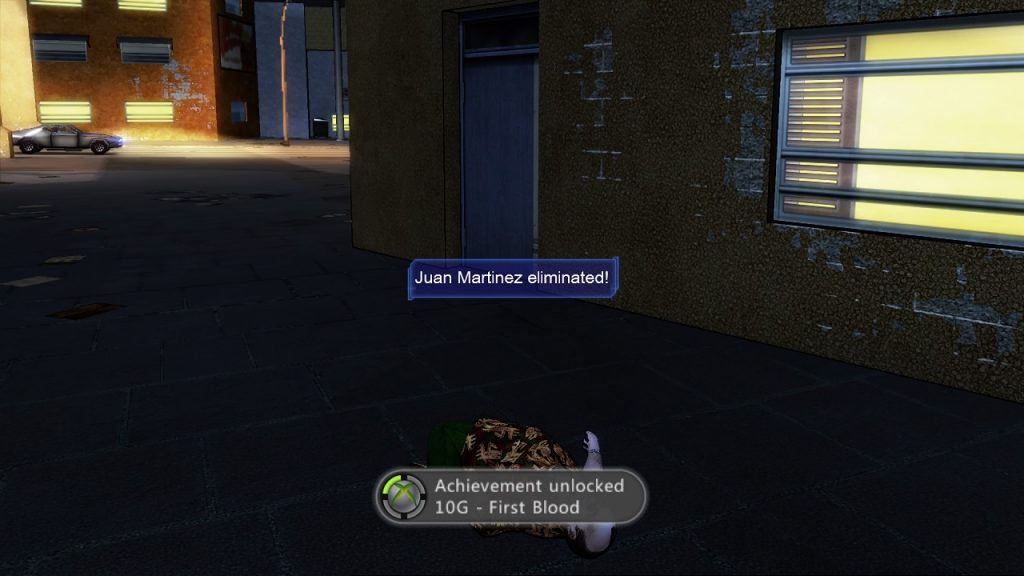 Each Agent had five skills at their disposal that could be levelled up to unlock new abilities and stronger power. Strength would increase your Agent’s punching and lifting power to throw bigger objects further, Agility would increase your jumping height and movement speed, the Driving skill improved your handling of vehicles, Explosives created bigger and better explosions (bringing the boom!) and Firearms increased your shooting ability with weapons. These skills could be upgraded by collecting specific orbs and killing/blowing up enemy gangs, particularly the various gang leaders. 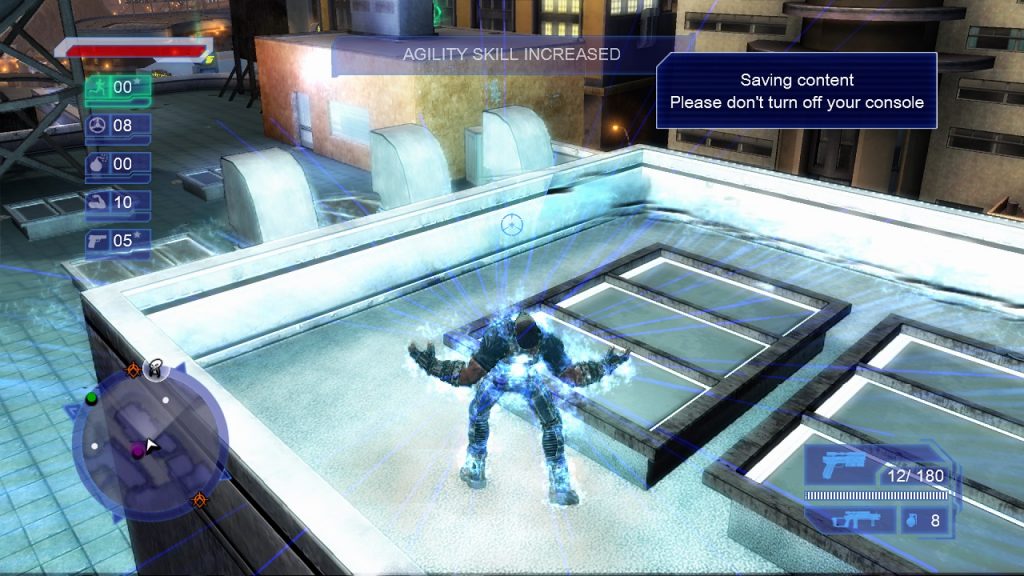 Crackdown 2 takes place 10 years after the events of the first game and added enhancements to skills such as a ground pound ability that sent out a shockwave, a charge ability to get up close and personal, as well as enhancements to Agility skills to glide and use a wingsuit. You could play Crackdown 1 with hop-in hop-out 2-player co-op over Xbox Live which was revolutionary for its time. Crackdown 2 allowed 4-player co-op, as well as various multiplayer modes such as Rocket Tag, Vehicle Tag, Capture the Orb, Deathmatch and Team Deathmatch.

Crackdown 3 comes with two separate game clients – the single player/2-player co-op story campaign developed by Sumo Digital Ltd, and the Wrecking Zone multiplayer mode developed by Elbow Rocket. Rather than me telling you what’s different about this third game in the series, I’ll let the great man TERRY CREWS, aka Commander Jaxon do that for you!

Sorry, Terry gets me excited with these videos, and this excitement translates when I am playing the game. 10 years after the events of Crackdown 2, a terrorist attack has wiped out all of the world’s power. Survivors have sought refuge on an island called New Providence, however gangs have taken control of the area with gang leaders controlling various power, monorail and construction stations, all under the umbrella of the TerraNova Corporation. It’s your job to cause chaos in each precinct enough that it attracts the attention of the area’s gang leaders who will appear so you can take them out. 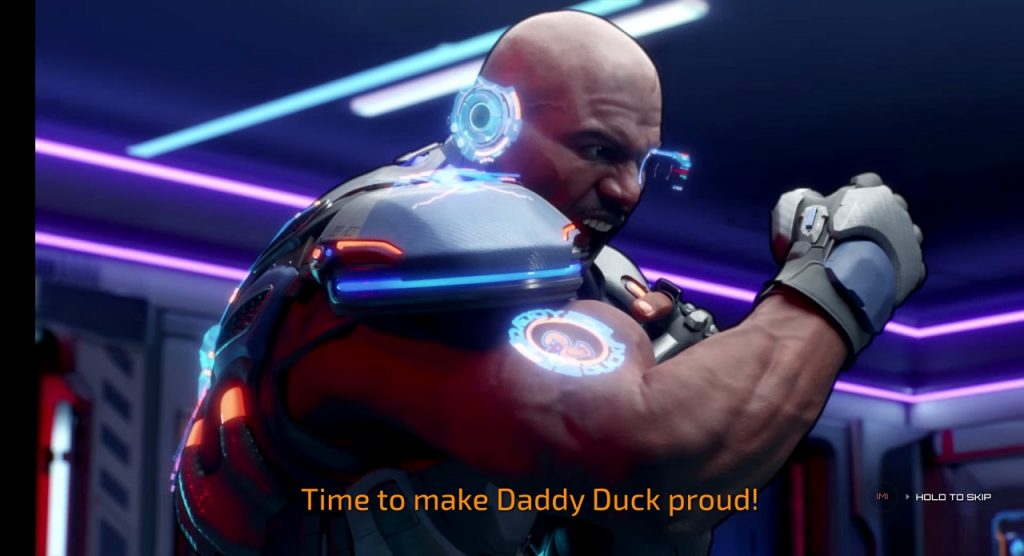 You start out by choosing your first Agent, 1 out of 6 options initially. As you play you can find DNA of MIA Agents which will unlock those agents for future play. The cool thing with Agents is that you can change out Agents within the same overall game world. For example, I started my playthrough as Roux because I figured most of the world is going to choose Terry Crews’ Commander Jaxon. After a few hours I made a new agent using Jaxon and I was able to continue progressing the world I was playing with Roux. This is a very cool feature to try out different Agent’s without having to restart the whole game again, though you have five slots to use up with different game worlds. I did find that on my original Xbox One and 110″ theatre screen, the level of detail in the character models looked a little dated compared with the rest of the game, however this wasn’t an issue at all on my PC. 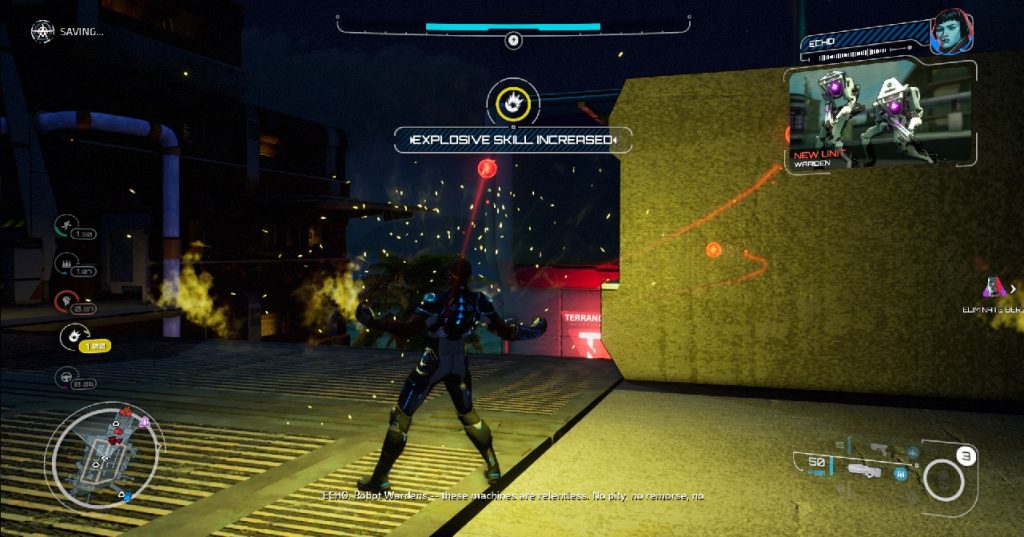 Skill progression is key for your Agent like Crackdown 1 and 2 and it does not disappoint. In addition to my favourite Agility orbs, there are mystery orbs hidden in hard-to-look places that will give you bonuses to all skills. A pulsing sound plays when you’re near an orb, so look up and all around until you find it. There are also Agility races, having your Agent jumping from rooftop to rooftop racing against the clock to get to the end, and car races are great as well. Not only are you racing the clock, you can gain skill points by doing tricks, taking out enemy soldiers and causing carnage along the roads. These are great filler activities in between major quest points. 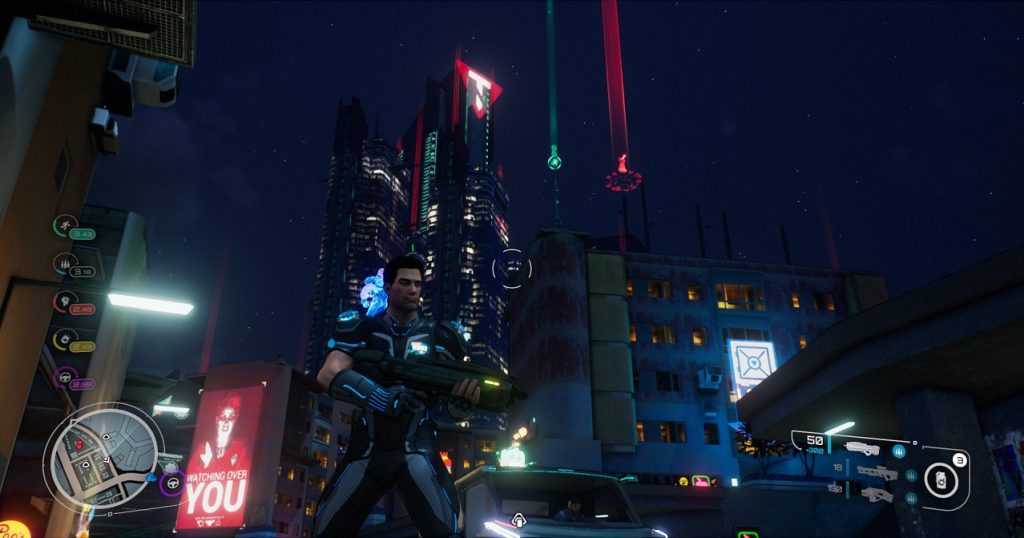 There are some great abilities that can be unlocked in Crackdown 3. Agility skills include double jump, air dash and an Agency launch pad, driving skills allow you to summon an Agency vehicle to your position, remotely detonate said vehicle into a group of enemies, turning your vehicle into a spider which can climb walls of buildings, and eventually unlocking an Agency tank! There’s always orbs flying at you through all activities that you’ll do. Also, as you pick up new weapons and drive new vehicles, they all unlock into your supply vault. Spread across the world are supply points that will replenish your ammunition and you can also summon specific vehicles from vehicle supply pads – just don’t be standing on the pad when you try to summon, otherwise it tells you the pad is blocked. 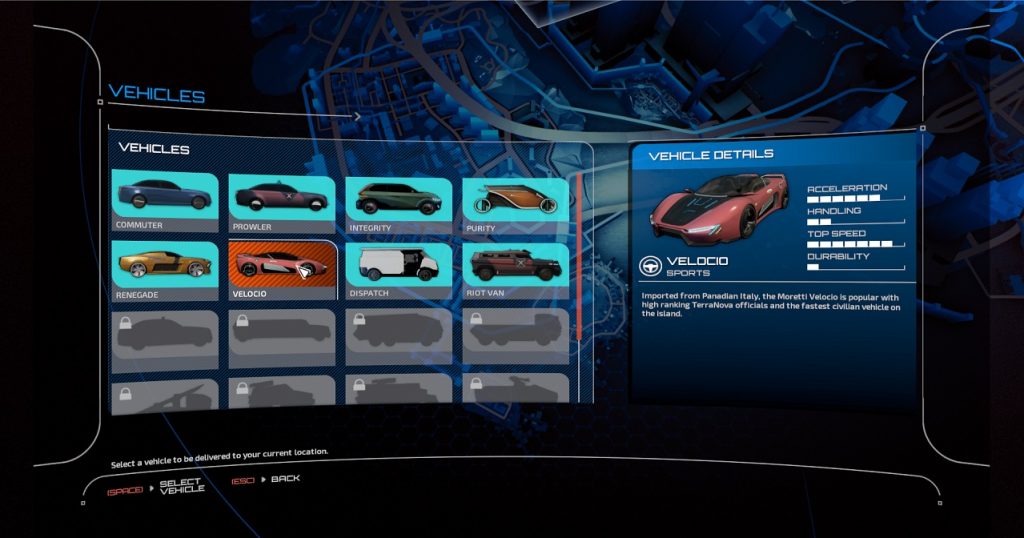 The overarching objective is to eradicate New Providence of the stranglehold that TerraNova Corp has on the city. To do that, you need to take down the various gang leaders. There are Industry monorail stations, Logistics power stations, Security bases and TerraNova propaganda towers. The amazing thing about these map icons is they tell you your percentage chance of survival. I didn’t notice this at first and kept dying when trying to take over a Security base. When I looked properly, I had a 41% chance of survival, whereas the nearby Monorail station was 83% chance. I cleared the monorail station, completed some agility and driving races and went back to destroy the security station. 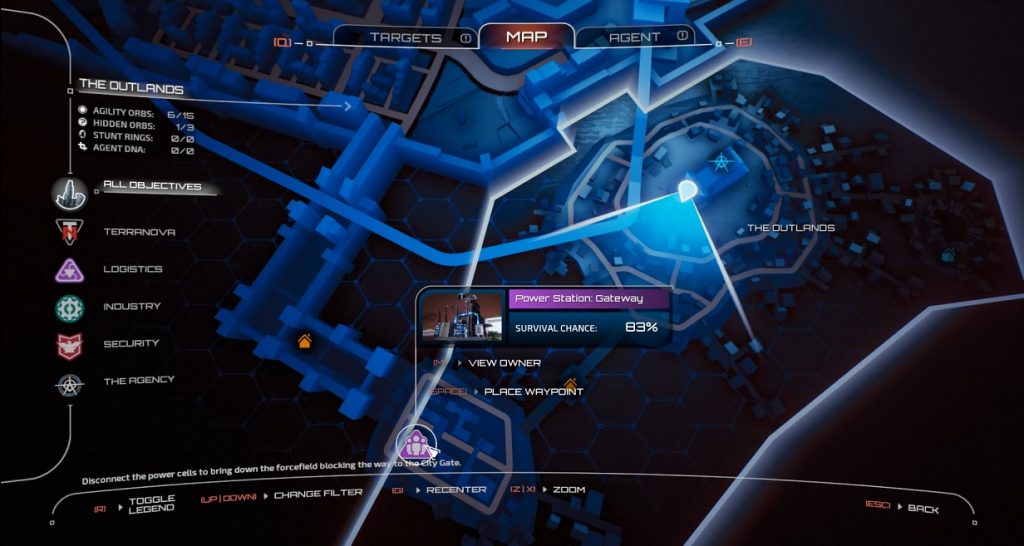 Once you take down enough objectives for a given gang, the gang leader of that precinct will show up. Taking them down will restore order to that precinct, and you’ll see giant holographic Commander Jaxon’s towering over the city spouting motivational comments. The voiceover from Agency Director Charles Goodwin is often hilarious, such as when I was levelled up my Agility, he said “Good! ‘Cause heroes don’t waste time walking!” I am really looking forward to putting more time into this campaign, and getting a mate to join me for some explosive co-op action! I’m glad they have limited it to 2-player co-op, as I feel you would just dominate everything too easily and lose that sense of being a super powered bad-ass. 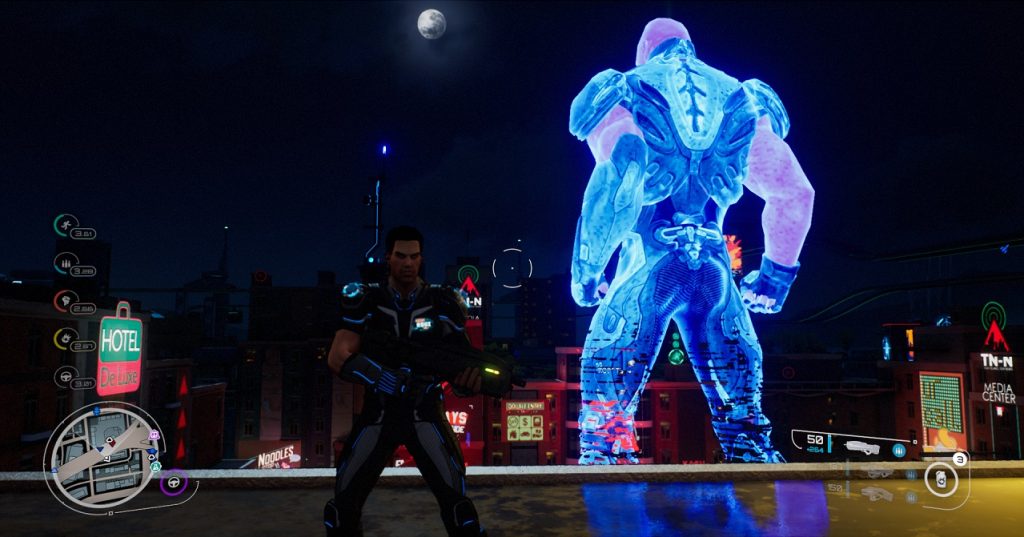 By watching the trailer, you can see the reason they have two separate game clients given in Wrecking Zone, the 5×5 multiplayer mode contains environments that are described as “fully-destructible battle arenas.” This just couldn’t work in the single-player campaign as almost everything can be literally blown to bits. At the time of writing this article, given the limited playtests we were offered during the review period and the difference in time zones, I was unfortunately unable to test out Wrecking Zone for myself.

From what I’ve seen of the public tests and what has been explained on the official websites, your Agent’s suit has been boosted so you can boost higher, dodge faster and punch harder. This would come in handy against the other team of real agents. There are also orange orbs around the map which charges your Overdrive meter which then boosts your Agent’s skills. These orbs respawn overtime so I can see some good strategy of holding points and creating choke holds. At the same time, you need to consider that everything around you is destructible which would make each game dynamic. I’m very keen to give it a go once the game releases.

As mentioned on Crackdown Twitter, “players will soon be able to take full advantage of the Xbox platform’s Party features so they can experience the fully destructible environments in Wrecking Zone with friends. Party functionality will be enabled with an upcoming title update along with our soon to be announced post-launch content.” 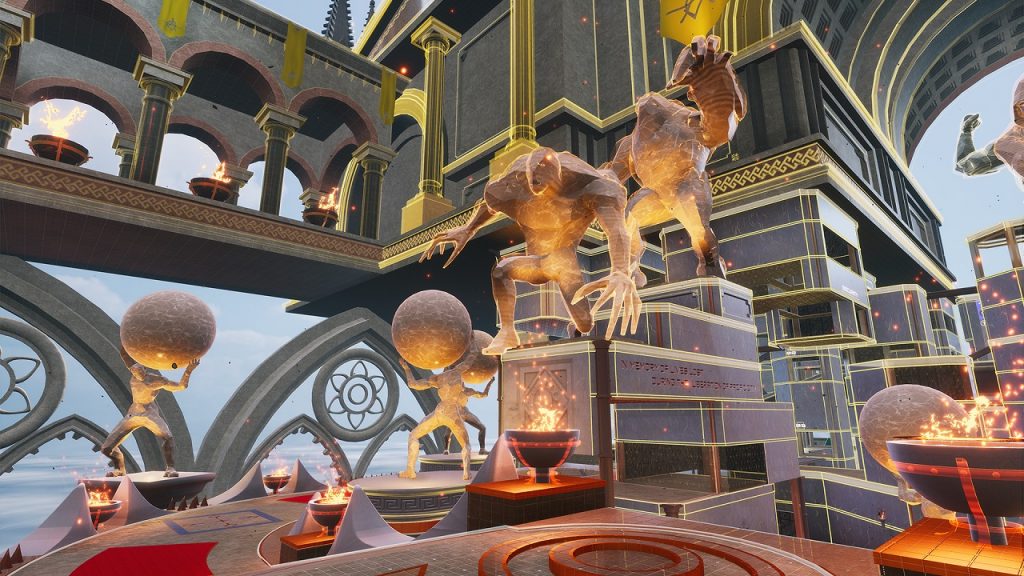 After the game officially released tonight I was able to have a few matches in the Wrecking Zone multiplayer mode. The Hall of Heroes arena pictured above is intense with buildings and bridges crumbling and collapsing around you. While you’re trying to scout out the enemy and lock onto them, the enemy is doing the same to you, designated by a beam showing which player has locked onto you. In this arena, when you kill an enemy Agent they will drop a badge. First team to collect 25 badges wins, so it’s a matter of making sure you get the kill and then grabbing their badge straight away. At the same time, trying to pick up  the badges from your fallen comrades, preventing the enemy team from getting them. I did have to adjust my graphics settings down a level on my PC as it is dated (2013, time for an upgrade I reckon!). Managed to get a couple of wins in the bag! 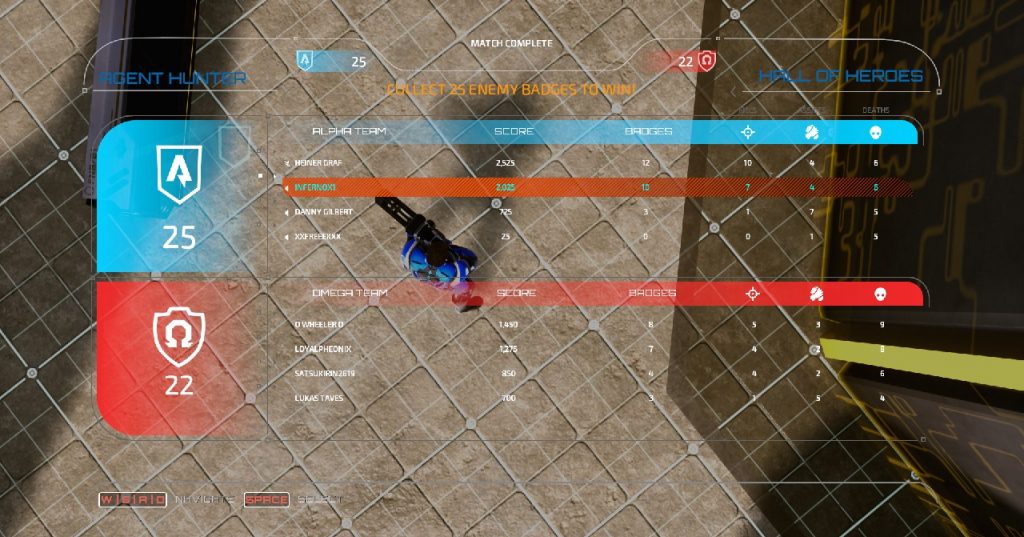 Overall, I gave the game an 8.5/10. Crackdown 3 has taken the best elements from the first two games and combined them into a very polished and engaging world to explore. Playing as Terry Crews is a bonus, but any of the Agents are fun to play and the skill enhancements system is by far its strongest point, enabling bigger and better explosions, jumps, driving and killing power. I especially loved building up the Agility skill, enabling me to find more orbs in higher and harder to reach places. Some of the TerraNova broadcast towers were like jumping puzzles of their own! I did notice a slight drop in character detail when playing on my original Xbox One, but playing on my PC looked and ran great.

This review utilised a game key provided for review purposes on both Xbox One and Xbox Play Anywhere on Windows 10 PC with 10 hours of gameplay. Crackdown 3 is rated MA15+ for Strong Violence and Online Interactivity and can be bought through the Microsoft/Xbox Store for AUD99.95. If you’re an Xbox Game Pass Subscriber, you can start playing from day 1 release!