Dead Or Alive has been a series I haven’t touched base on in over a decade, thus I was keen to see how far it’s come after all these years with Dead Or Alive 6. It’s no surprise it’s stayed true to being known mainly for it’s scantily clad fighters with a dash of silliness whilst being a hardcore style fighter. As soon as I heard its bellowing start up sound, it brought out all sorts of arcade nostalgia. Nor could I get enough of its high energy soundtrack. However, my expectations of what else it could deliver eventually fell kind of flat.

The combat arenas are similar to those in previous installments. Ranging from the DOA Tournament ring, alleys, labs and even a dinosaur pen. In this particular arena I was able to slam my opponent into a large egg, breaking it in the process to be met with a giant Pterodactyl, causing some extra damage to said opponent. I liked how I could use these environments to my advantage and how they all acted differently from each other. Some had breakable barriers while others exploded. Most arenas also had the ability to carry on with the fight in a different location within the arena. The design and layout of the majority of these arenas along with the smooth freedom of movement have become my favourites to throw down in compared to the traditional two-dimensional combat environments in many other fighters.

The use of the Triangle system as the main technique for the games combat is the same as the rest of the Dead Or Alive series. It’s execution being similar to Rock Paper Scissors where certain actions counter others. I gave this technique a shot after essentially bashing buttons to fluke wins. However this was a difficult system for myself to pick up and master. After failing to read my opponents and counter their attacks with precise timing, I continued to block, kick, punch and booty pop my way through, hoping for the best. Yes you heard me, booty pop. There are a bunch of moves and combos to learn and create. Although I learned some moves are much easier to execute within the training room as opposed to in the arena. 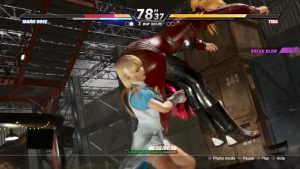 Moving away from the arcade mode, my focus soon went towards Dead Or Alive 6’s campaign and an unfamiliar mode called DOA Quest. Unsure what to expect from this mode I went in with neutral expectations. However after giving it a decent go, I wasn’t sure if I genuinely liked it or not.

DOA Quest is based around some form of a “storyline” where you collect research. None of which is really important since it’s essentially a sort of grindy rewards system. There are over 100 fights to compete in against AI that get progressively harder. Each fight comes with 3 objectives. Completing objectives grants you a star and a reward, usually consisting of currency. Obtaining 3 stars per fight gives you the grand reward of Costume parts. Fighter costumes aren’t simply unlocked as expected, instead you must grind through the game for specific costume parts if you want the freedom of character customization. And at times it felt like the parts were randomized making the system feel a little broken. After completing a quest I was rewarded 300 costume parts for a particular costume that only cost me 200. And this happened more than once. Not only that you still have to pay in-game currency for the costumes once you have all said parts, which in hindsight shouldn’t be a big issue since it’s easy enough to create a large cash stash. Unless you’ve spent it all on titles and accessories.

In regards to unlockable content, I was pleased but also kind of let down when all but two characters were instantly playable. Personally I would have much rather grinded away for unlockable fighters than costume parts. This whole system of grinding for parts to unlock and buy cosmetic items gives Dead Or Alive 6 that extra something for you to work towards. However at the same time I do wish that costumes were able to be rewarded in the traditional sense of leveling up, story progression, defeating certain opponents. 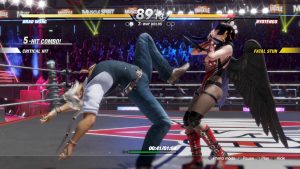 As for the real storyline of the game, Dead Or Alive 6 once again revolves around the DOA Tournament. All other greater detail of the story became lost and confusing within its execution. It’s told through a mixture of blurbs and short cut scenes between very short one round fights. Some of the fights kind of felt like they were happening for any old reason, usually initiated with the words “Let’s spar!” The story starts off briefly as a linear sequence and then branches off into separate “episodes” for each character who have their own story to tell within the same timeline. A chapter, or sometimes more than one, would unlock depending on the fight you had just cleared. However, trying to connect the happenings of each chapter became very confusing and sometimes frustrating. Because of this, the story progressively became less appealing. After checking out the trophy list, I noticed there wasn’t even a story-related trophy. It doesn’t even give you an incentive to play the story if you’re an achievement hunter.

Although achievements lack anything in regards to the story, there’s still a few for those hardcore fighter and fans of ranked online multiplayer. Unfortunately I had a rough time enjoying online only because I’d always get poor network connections.

Outside of it’s confusing story mode and a tedious grind system with no real benefits other than cosmetic customization, Dead Or Alive 6 still manages to deliver a classic arcade fighter experience for casual fans and hardcore players alike.