In a dystopian future humans are living deep underground to protect themselves from the dangers on the surface. It’s been over 70 years since the virus and the biggest change humanity has ever seen. No, I’m not talking about events we’re facing in 2020 and beyond. Dead Or School tells a similar story of a large scale crisis but mainly that of a young girl who just wants to go to school and live what’s meant to be a normal life.

Dead Or School is a 2.5D side-scroller by Studio Nanafushi set above and below the streets of Tokyo. Much like what’s happening around the the world right now, a dangerous virus has plagued humanity. But it’s not just making people sick. Those affected by the virus have also become dangerous mutants. In the early days humans decided to fight against the mutants but after three years of war, the humans lost. Many years later and the human population know next to nothing about life pre-virus. And surprisingly enough they don’t know a lot about school either. That’s until a young girl by the name of Hisako discovers her grandmothers old high school uniform. Hisako wants the life her grandmother was fortunate enough to live. And I wouldn’t be lying if many young kids will be thinking the same in years to come. Going to school and hanging out with friends sounds a lot better than being isolated. So Hisako sets out on a journey to the surface to find her new high school, No matter how dangerous the journey seems. 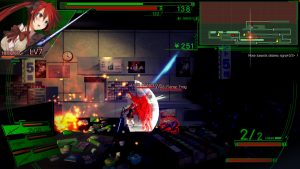 The fight against mutants is a fast paced slaughter that will test your reflexes. It’s not as punishing as that of Dark Souls but it’s enough to give your thumbs a decent workout. With a plethora of weapons at your disposal, combat is never boring, always rewarding, sometimes grindy and forever changing. The choice of play style is yours with both melee and ranged weapons to experiment with. In a weird turn of events, the melee weapons were a winner for me even though I generally fight from a distance. There are multiple weapons in each category to pickup from drops and loot chests with each offering slightly different approaches for each fight. There are weapon stores as well but I honestly found little to no use for them as they mostly offered weaker options than I had already equipped.

But why rely on stores for better weapons when I could reforge and modify my own? The deep customization of weapons was an unexpected feature that quickly became a favourite. Collecting what ended up being hundreds of weapon mods I was able to either increase my weapon ammo, durability, power or overall stamina. I also found some hidden gems throughout my large hoard which when combined I gained two second winds and always had a drone sidekick to do my bidding. You’ll be forever chopping and changing your weapon builds to either suit your own personal tastes or accommodate that one fight you just can’t seem to get past. Unfortunately this can’t be done on the fly as equipping and customizing can only be done at save points. Reforging weapons will also give you some additional power but will cost a bit of Yen so it’s always helpful to sell those weapons/modifiers you don’t need. Which shouldn’t be hard to gain a large collection of. 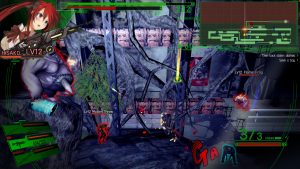 There’s an unspoken grind to Dead Or School with progression sometimes not meeting the required level to proceed. Luckily death doesn’t take away any leveling progression before your last save. But enemies two levels and lower will result in very minimal XP so it’s best to always grind against the toughest foes.

In another surprise find Dead Or School falls into some RPG territory. Hisako can either hone specific weapon skills or focus on self development (HP/stamina) with skill trees focusing on her weapon types. With all of these varied customizable play styles to explore this flipped the script of my initial expectations making combat less punishing.

While the combat mechanics were extremely fun to play around with, there are moments where controlling Hisako were a bit of a pain. As a 2.5D side-scroller there’s areas going from small corridors to large open spaces leading to the camera angle changing on the fly. This meant moments of hectic combat while trying to focus on where Hisako was positioned with the camera completely zoomed out. A marker is given as a guide on some occasions but for the most part I would lose myself in the hoard of mutants pouncing on me. There was also the odd occasion where Hisako’s character sprite would temporarily be stuck to an environment. I even had to restart my game at one point because I fell down a hole and got stuck half way down. Apart from the movement and camera issues, the rest of her controls are easy to get your thumbs around. I’d also recommend a Pro Controller for this one if you’re playing on the Switch. 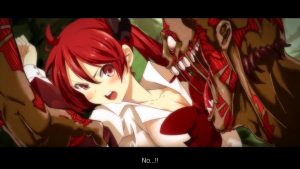 Dead Or School sticks with a traditional anime art style that I’ve always enjoyed. There are very rare occasions where it’s slightly sexualized which I’m not entirely surprised with. But one example of sexualized graphics was that of our main protagonists uniform tearing after taking a certain amount of damage. I’m not a prude but it was a bit of a cringe moment with the age her character is meant to be and where the uniform tore. Since this is a 2.5D side-scroller, this obviously means our 2D characters are placed against a 3D. However the contrast between the pair didn’t pop for me. But in saying this, the 3D level environments are well designed however that much can’t be said about some of the 3D character models. Some of the mini-boss design looked a tad lazy with a lot of grey happening. The fully rendered cutscenes were a big miss for me as well, looking blurry and that of a game from last gen. Luckily they’re not entirely relied on.

Overall, Dead Or School may not be the most polished visually but it almost makes up for its flaws in terms of combat and deep weapon customization.

Dead Or School is available now on Playstation 4 and Nintendo Switch and I give it a 7 out of 10.