“Even after finishing Devil May Cry 5 I wanted to play it all over again. And this is coming from someone who never does multiple playthroughs.”

If all Hack and Slash titles were like Devil May Cry 5, the sometimes repetitive genre would be right back up the top as one of my favourites. The dark and sometimes quirky 5th installment by Capcom continued to impress me the further I progressed with how it presented itself. After the first couple of hours it was obvious that this was going to be one of my favourite games this year.

To be honest, this was my first Devil May Cry which had me worried about the amount of lore to catch up on. Luckily, Capcom took out the middle man of playing through the previous four games (which I already plan on doing) and gives an optional brief run down on previous events. Following the story through the rest of the game was made even easier with small catch-up blurbs between missions in case you missed any vital plot points.

The story begins a month after Dante, Nero and a mysterious newcomer known only as V failed to take down the demon king, Urizen. As such, the surface is now plagued by a hellish infestation of demonic creatures. Alas, Nero and the Devil May Cry van are always close by to slice, dice and lay some lead into these horrific beasts. 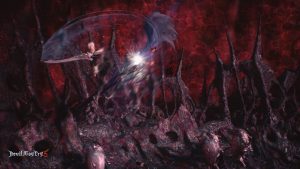 Even with the inclusion of Nero’s unique Devil Breaker ability and sword power up, he feels like your basic hack and slash protagonist. He does however have a bunch of skills to unlock at the cost of Red Orbs. Hunting down orbs almost becomes an obsession in this game and I had fun exploring every single nook and cranny to find them. In saying this, you’re also given the option of skipping this grind, if you can call it that, by purchasing Red Orbs with real money. The same applies for blue orbs which increase HP. Never being a fan of micro-transactions this aspect kind of annoyed me, although this is in no way a true form of pay to win. Each to their own but it does take the fun and reward out of collecting orbs to help you become more powerful.

Of course, you’re never stuck with the same basic combat style that comes with Nero as you eventually get to play with the other two members of your demon hunting trio. Dante and V also come with their own unique abilities and combat style that completely flip the script in regards to gameplay.

As a summoner, V is able to command pets to do his bidding. It’s surprisingly a class that never gets too boring. You’re still zipping around, dodging enemy attacks, pulling off unlockable pet abilities and finishing off enemies at their weakest. However Dante’s skill set is hands down my favourite to play around with. With a wide choice of ranged/melee weapons and stances that provide specific buffs, I was doing more than just bashing the same couple of buttons.

The difference in how each character performs in combat gives Devil May Cry 5 a sort of RPG feel. However there are restrictions as to which character you can play as in certain missions. It’s the type of change a game like Devil May Cry 5 needs. You’re still repeatedly bashing buttons but it’s that variety in combat execution that keeps gameplay feeling fresh.

While the combat feels fresh, the worlds your explore are mostly dead and rotting. The environments above the surface however were more visually appealing. Showing a somewhat destroyed city that once was, intertwined with the ugliness of a hellish environment growing over. Through the cracked streets, subway system and sewers, it’s a vibrant environmental contrast before diving into the hellish depths of the underworld. 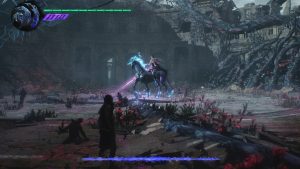 The creatures from below are no different. Although sometimes gory but always terrifying, their design is a treat to look at and take in. Many of the common enemies you encounter are well designed but the main stand outs are the boss creatures. I was left in awe with the variety and thought put into creating these demonic beasts, even though one or two were almost nightmare inducing.

Devil May Cry 5 isn’t just a treat for the eyes but also for the ears. That is if you’re like me and like your music loud, heavy and fast. The adrenalin was always pumping during combat with it’s rock/electro soundtrack, pairing perfectly with the pace and tone. The voice acting didn’t disappoint either. It never sounded too forced or out of place and in some moments felt truly genuine according to the characters emotions.

Even after finishing Devil May Cry 5 I wanted to play it all over again. Everything the game had to offer made me want to go back, take on the next challenging difficulty and clean up the rest of the trophies. And this is coming from someone who never does multiple playthroughs. Capcom did a fantastic job at making a fun fantastic game out of a genre I now very rarely pick a game from.