After my first Devil May Cry experience earlier this year with DMC 5, I was keen to play the other Devil May Cry titles down the track. In another nostalgic move by Capcom, the first in the popular Devil May Cry series has been added to the large library of ports to the Nintendo Switch. While it definitely shows its age I was able to see why the series has done so well whilst also seeing how it’s improved over the years.

It’s been 18 years since we’ve been introduced to Dante, son of the demon Sparda, and his action packed adventures as a demon hunter. After a visit by a busty blonde demon named Trish, Dante learns that Mundus, ruler of the Demon World, has been resurrected. Being the descendant of Sparda, Dante is the only one who can take him down. Trish directs Dante to Mollet Island where Mundus is believed to be found. You explore the gothic environment of the islands castle and surrounding areas. And will do so multiple times throughout the story. There are areas out of reach until you find certain items or progress to a particular part of the story. This sort of exploration gameplay is reminiscent of the early Resident Evil titles where you’re almost solely based within one building, unlocking different areas as you progress. However these events are much more linear in comparison, especially when the events are broken up into missions. Because of this the satisfaction and reward was pretty mild. 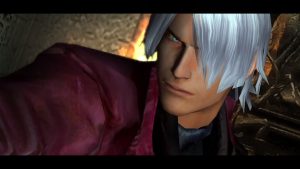 But Devil May Cry isn’t known for its exploration, a part from hunting for secret missions and hidden blue orbs, of course. Missions are filled with fast paced hack and slash action with its signature dash of increased difficulty. Combat isn’t limited to swords though. You can slice, punch, kick and shoot your way through the 23 missions. There’s also punishing boss fights aplenty throughout. Just as you think you’ve kicked ones ass, there’s another a few missions away just waiting for you to step up. These fights will truly test your hand eye co-ordination and reflexes. Obviously they don’t compare to today’s standards of combat difficulty we’ve become accustomed to with the likes of the Dark Souls series. A couple of these encounters were more interesting than others though. Some required you to actually figure out how to efficiently kill the boss. While others I was easily able to cheese by spamming attacks, especially when using my grenade launcher. This weapon became super handy as it was extremely useful during encounters and helped ease the difficultly.

Just like the classic Resident Evil titles, Devil May Cry also shares the same style of fixed camera angles. For a game from 2001, I’m slightly surprised by this. It made for some mildly annoying movement controls, both in and out of combat. I’ve lost count how many times I’ve accidentally ran the other way when the camera angle changed. A small number of boss fights in particular were majorly affected by these camera angles. Not being able to see what you’re fighting against nor what they’re doing can become frustrating. Luckily gun aiming is automatic so shooting at the boss, particularly with my trusty grenade launcher, made it slightly easier. 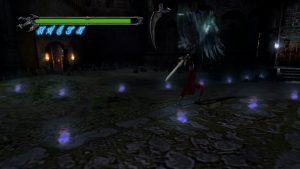 Killing enemies as well as exploring every corner will reward you with red orbs. Trading red orbs will give you important items like health and character boosts as well as upgrades for your weapons. Collecting red orbs is important since they’re not only used as currency but upgrades are expensive so start saving early. Personally my purchases seemed to be far between in comparison to what I was used to in Devil May Cry 5. But in saying this, there aren’t as many upgrades to play around with in the first game so the balance kind of seems fair.

Right from the get go you can tell it’s been quite a few years since Devil May Cry first came out. The games UI gave me plenty of Playstation 2 nostalgia, both with its aged visuals and it’s 4:3 ratio. Oddly enough it doesn’t match up with the gameplay which is shown in widescreen. Gameplay visuals are the most up-to-date though taken straight from the most recent HD remaster. I also love how they’ve stuck to the original sound effects in the menu screen after all these years. It’s very old school and very Capcom. I don’t know how to describe what that means exactly, it’s just very reminiscent of the 90’s/00’s era.

It absolutely shows its age but the more you play Devil May Cry’s Nintendo Switch port, the more you start to overlook this aspect. As a new fan to the series, it makes me wish I picked it up years earlier.

Devil May Cry is out now on Nintendo Switch and I give it an 8 out of 10.