“The Devolver Bootleg collection is a great set of 8 games that are fun and take the mickey out of their originals.”

Devolver Digital are known for publishing some amazing games such as the newly released My Friend Pedro (keep an eye out for Nicco’s review very soon!), Katana Zero, Scum and many others. They are also known for their way out there E3 conferences and not taking themselves too seriously. As such, at this year’s E3 ‘Devolver Digital Big Fancy Press Conference’, they announced they were releasing Devolver Bootleg, a collection of eight rip-offs of their own games and it was available to play straight away via Steam. To help sweeten the deal, they offered a massive 1% discount for a limited time! And no, that’s not a typo – 1%! Here’s the announcement video.

Upon loading the game, I was instantly awarded two steam achievements. Then I got two more as I navigated the game’s 8-bit DOS-like menu. YAAAASS! I love my cheevs! I think the developers had a few giggles setting these up … well played Devolver. 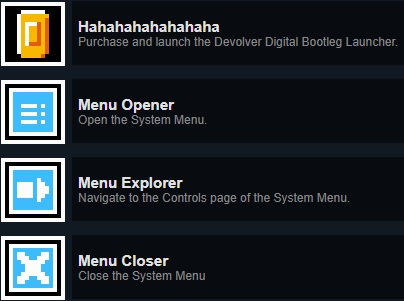 The eight 8-bit games are all play-on-names of their previously released titles such as Enter the Gungeon, Hotline Miami and Luftrausers. I haven’t played many of the originals myself but have seen them over the years. Devolver even mess around with their own business name in the main menu which I actually didn’t notice until writing this article.

The retro music and use of the keyboard took me back to the old DOS gaming days as I started to give the games a bash. It took me a few frustrating minutes in the first couple of games to figure out the controls.
Noob alert #1 for Inferno – the keys are the same for every game (arrow keys to move and then Z and X to jump/shoot depending on the game).
Noob alert #2 for Inferno – the settings menu can be navigated to the right which shows these key controls.
There, you won’t feel like a complete noob when you try to play these games like I did. Here’s a rundown of each game. I have included Devolver’s descriptions of each from their Steam page as some are hilarious, then a quick note on the gameplay.

Enter the Gun Dungeon (based on Enter the Gungeon)
“Imagine a dungeon crawler but instead of swords it’s guns. But also everything is made out of guns and bullets and stuff. Like, everything.”

This was the first game I tried and as per my noob alerts above, it took me a few deaths to learn the controls. Once I got the hang of it, the gameplay was simple. Clear the room of bad guys using the clunky controls, go through one of the four doors that then open, as you progress into rooms with obstacles and harder bad guys. 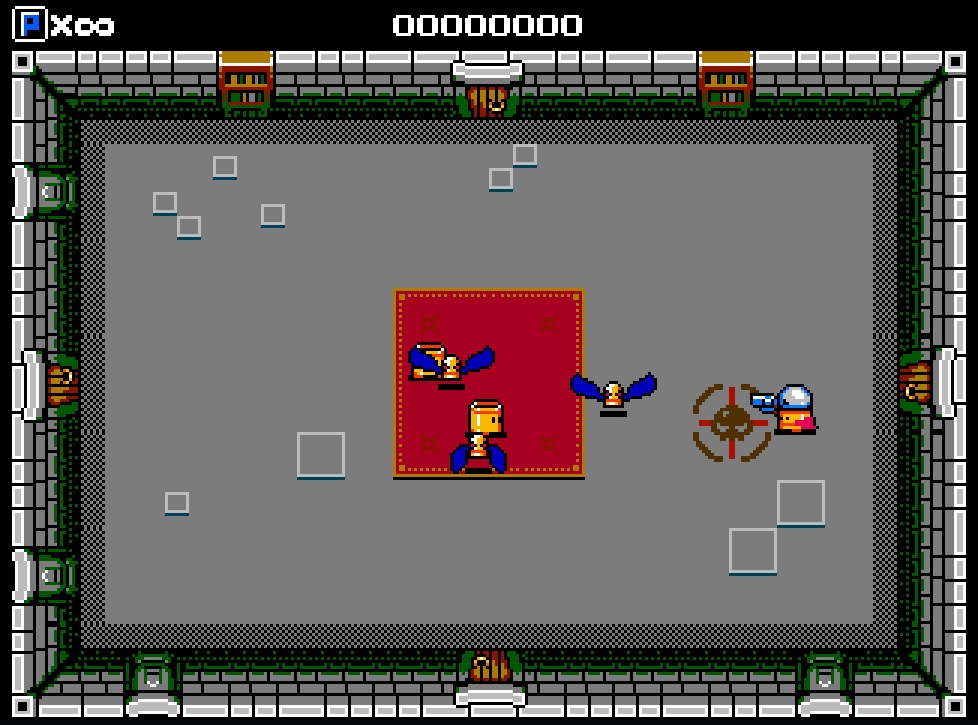 Hotline Milwaukee (based on Hotline Miami)
“Brutal, fast-paced, stealth action and a whole lot of blood. From your garbage person apartment in historically interesting and relevant Milwaukee, pick up the phone, and answer the call–of murder. Follow instructions and follow the stairs deeper and deeper into the mysterious basement. Where does it go? Who are you?”

This one wasn’t too bad, though I kept forgetting about the bad guys sitting in chairs as they sit still until you’re near them. I also kept accidentally throwing my gun at the enemy instead of shooting them. I’d run over madly dodging, pick up the gun, shoot them until I ran out of bullets, then throw the gun at the next bad guy. Failing that, there were plenty of knives to pick up. I felt a bit like I was Austin Powers, yeah baby! 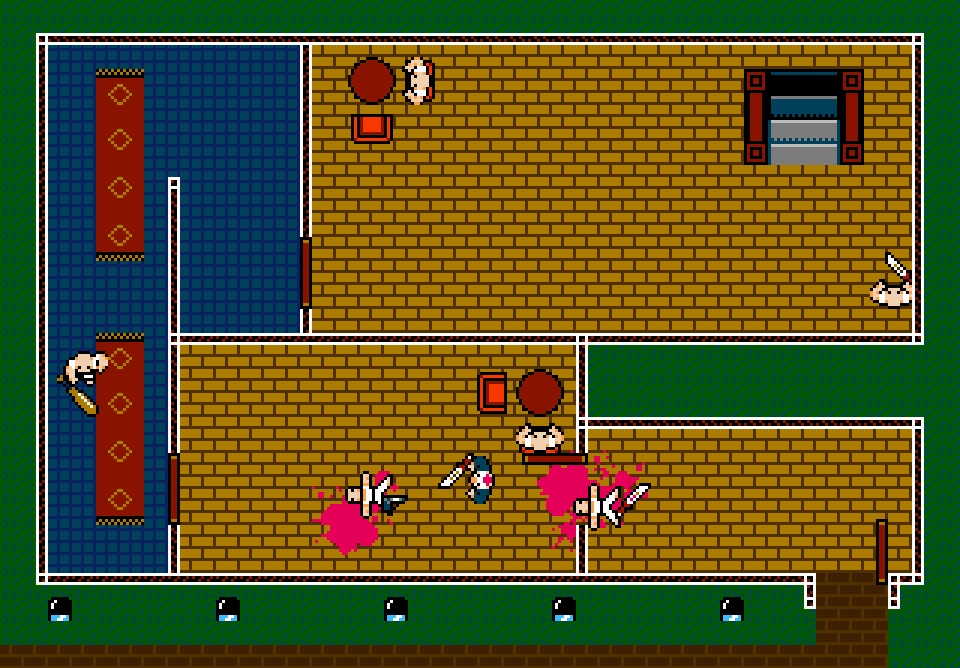 Ape Out Jr (based on Ape Out)
“Escape out of ape prison in this classic arcade-style platformer where you play as an orange gorilla who will kill everyone so he can to see his dad again. Grab unsuspecting guards to use as weapons and shields in this completely original idea set to an interpretive chiptune jazz drummer soundtrack. Please, Ape Out was my father’s name.”

This was another game that took some keyboard bashing to work out the controls (I hadn’t yet found the settings menu explaining the controls). Once I learned the power of Z and X, I was a banana chomping, bad guy bashing, fall-down-every hole kind of Ape. I did break the high score so that was an ape-fist pump moment. I got stuck on this bloody level – see that gap at the middle top of the map? Nup, I can’t jump it no matter how many ways I tried. *Google’s a walkthrough* 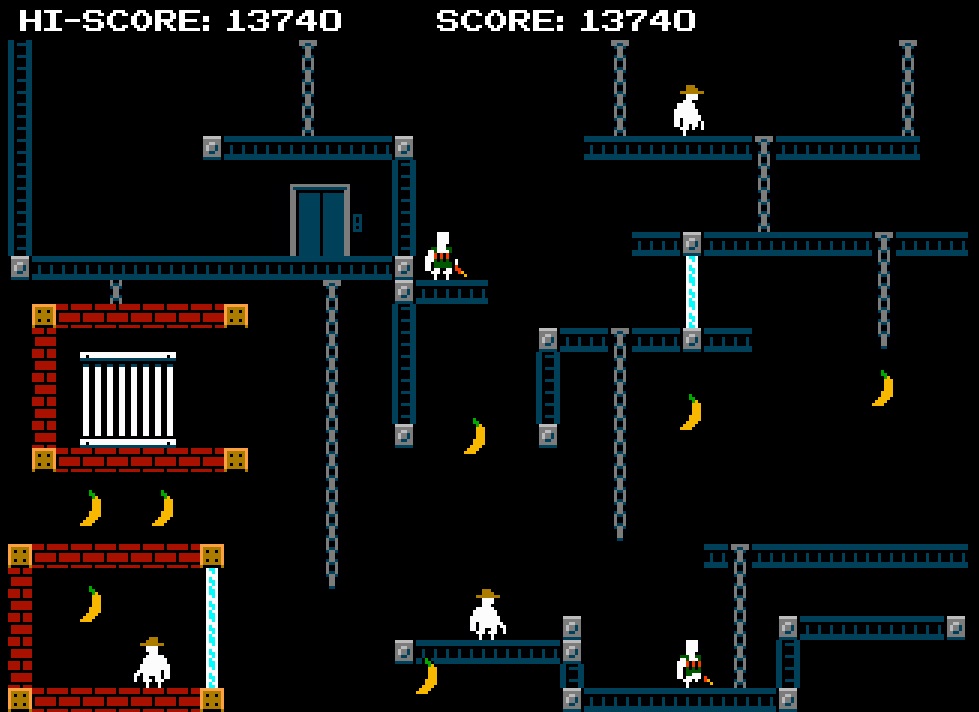 Shootyboots (based on Downwell)
“It’s the never-ending story of a young boy falling down a well, wearing a giant boot as if it was overalls, which also is a gun. Collect gems, squash and shoot the fauna, fall deeper into the infinite well, and wear some other equally large and ballistically designed shoes.”

You’re a boot, falling down a well, and need to be a shooty boot to kill the monsters you’ll come across. You also need to shoot blocks out of the way as you fall. Not bad, but if I progressed down too fast and missed killing a monster, I was done for as I would either jump straight into it or not be able to jump over it to shoot it. 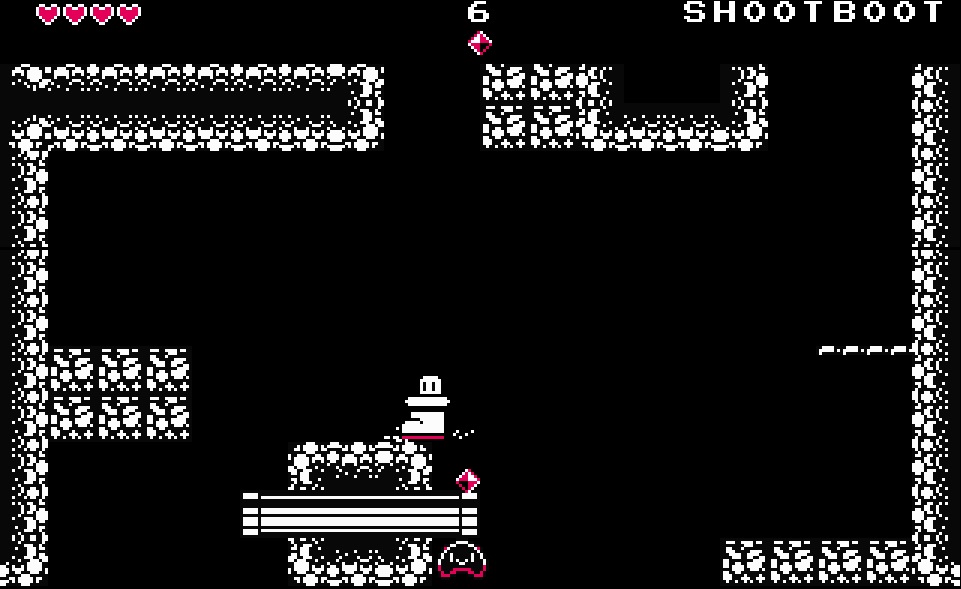 Luftrousers 3 (based on Luftrausers) – This has the best origin story!
“Hello, I am Rami Ismail, ½ of Dutch independent game development studio, Vlambeer. We made a version of Luftrausers that had a typo, and JW left the thumbdrive containing the source at a coffee shop somewhere while I was doing a talk in Berlin, then Nairobi, then in Los Angeles the following day. If you find the thumbdrive, can you please return it and please PLEASE do not share the contents with anyone or add it to a compilation of pirated, under-the-table ripoffs of games that Devolver has published.”

This one was pretty cool with the ability to scroll the map left or right and using the little mini-map at the bottom left of the screen, you can see which enemies are left to destroy for that level. There’s also a little shop boat in each level where you can upgrade your weapons etc. 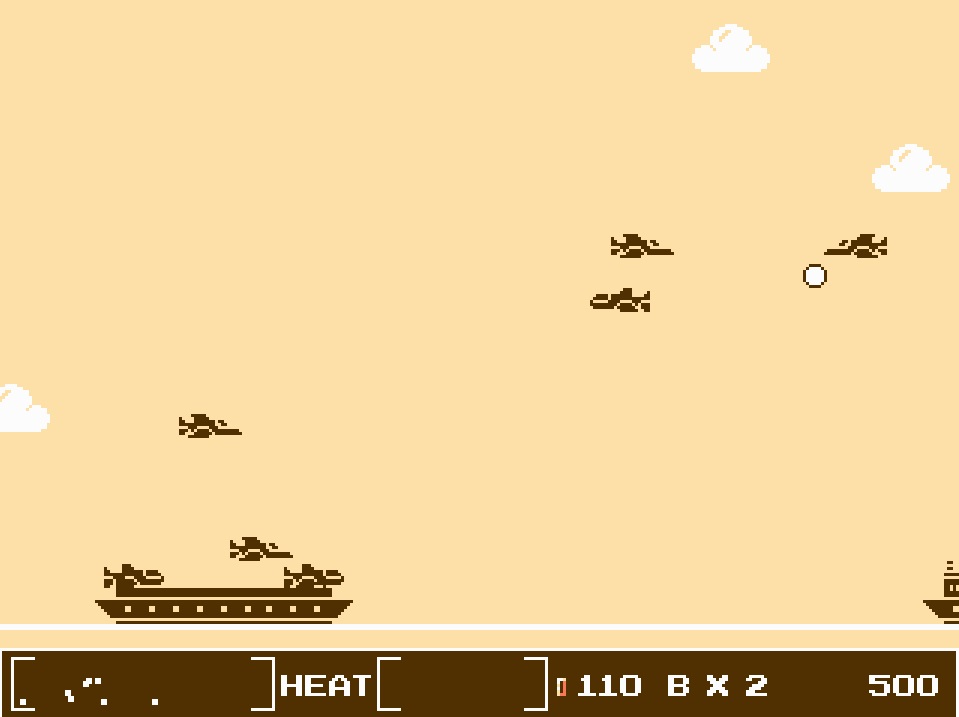 Cat Game/Catsylvania (based on Gato Roboto)
“It’s a cat inside of a suit of armor. It’s a cat…In full plate armor. What else do you want?”

This was a cool side-scrolling game where you’re a cat in a suit of armour – very puss-in-boots-ey. You can collect a spare set of armour but when you get hit the armour falls off. Then you’re a sword-wielding cat! You also get ninja stars to throw. 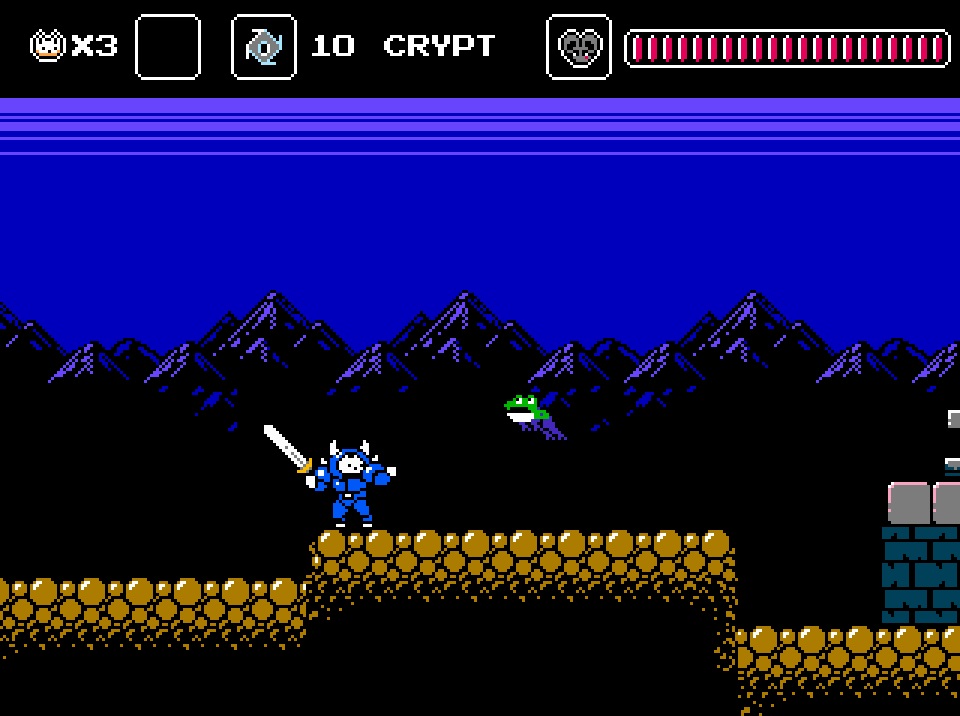 These last two I couldn’t play as they require 2-players and the second must use a controller, which I didn’t have available at the time. Given the retro DOS feel I was getting from the rest of the games so far, I was hoping for some 2-player on keyboard action. I remember playing 2-player games on keyboard as teenagers with my mate Grant, getting keyboard conflict errors in the heat of battle. Ahh the memories!

Super Absolver Mini: Turbo Fighting Championship (based on Absolver) – 2-players only.
“A competitive fighting game where you play as your choice of one of four masked combat disciples. You choose two special moves. You fight two rounds. The winner is absolved of the obligation to ever have to fight again, but probably will anyway because the one true resolve of the flesh is a fist colliding with it.” 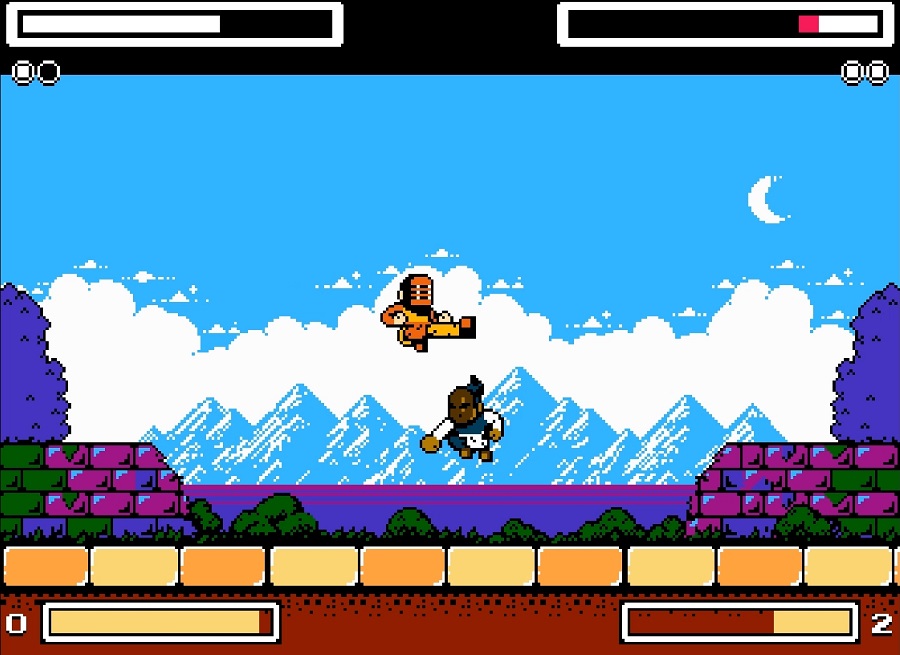 Pikuniku Ball-Stars (based on Pikuniku) – 2-players only
“Everybody’s favourite red thing with legs is back and ready to sink some baskets with a friend. Nothing but net baby. Slam freakin’ dunk.” 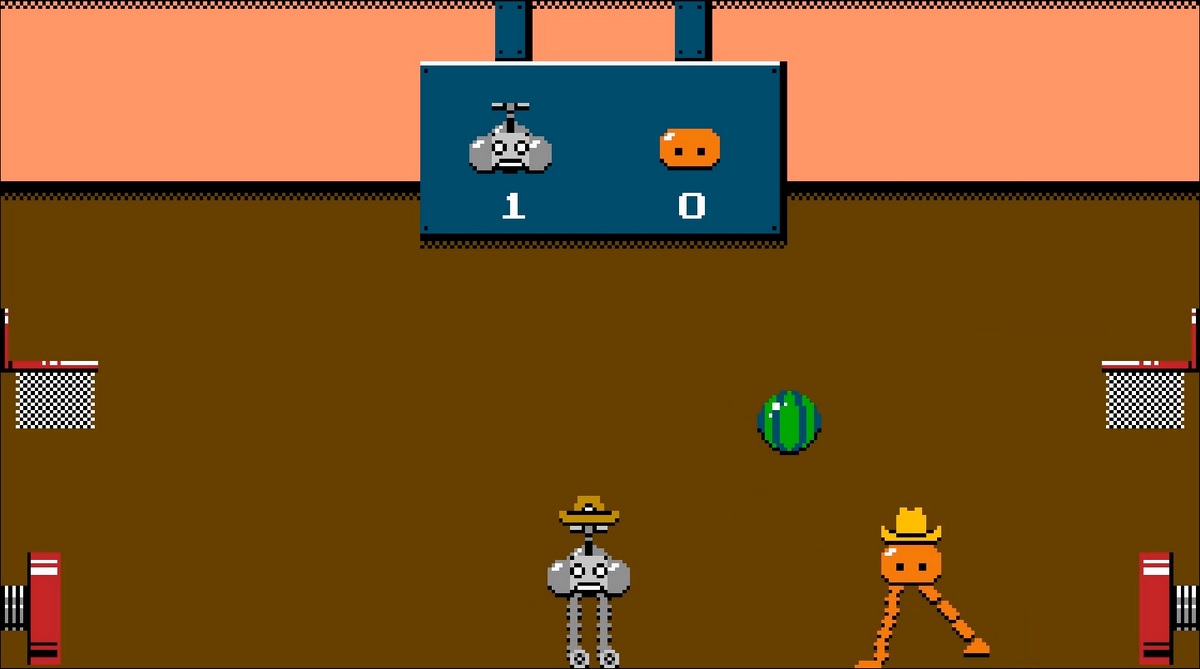 So there you have it, eight games in 8-bit glory, all in one collective Devolver Bootleg package. As I was playing each game, it did remind me of playing old DOS games as a teenager in those pre-internet days where you’d call up your mates to tell them about this cool game you’ve discovered. I also liked the humour in these games, not taking themselves too seriously and therefore you played them with that mindset.

Overall, I gave this package a 7/10. The Devolver Bootleg collection is a great set of 8 games that are fun and take the mickey out of their originals. Devolver are known for great games, as well as for not taking themselves too seriously, and this collection reflects that mindset. It’s great for retro enthusiasts looking for some quick fun but if you haven’t experienced, or can’t handle the oldschool sounds and graphics, it may not be for you.

This review utilised a Steam key provided by the publisher. The game is available now on Steam with a huge 1% discount at AUD$7.42 until 10 July where it bumps back up to AUD$7.50.