For most of the pandemic, many people entered into ventures outside of their regular field of work for different reasons. Some examples include driving for Uber, taking up full-time streaming, and/or starting an OnlyFans. But Simon Ridley, the drummer of Aussie dance-punk trio DZ Deathrays, put down his drumsticks during lockdown to create a video game from scratch.

The end result is a simple game called Dive Bar Superstars, starring the band themselves as you lead them to superstardom. Its gameplay concepts are familiar to the same old mobile games I’ve played in the past, but also had me bopping along to every beat. 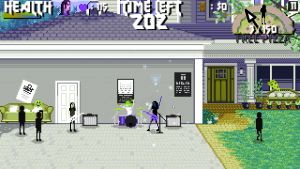 To be honest, I wasn’t very familiar with DZ Deathray before hearing about Dive Bar Superstars. However I quickly became a fan after a quick search on Spotify, which had me amped up to play. And in a way, I’m glad I became a fan.

Dive Bar Superstars puts you in the shoes of a retro-pixel version of DZ Deathray, more specifically vocalist/guitarists Shane Parsons and Lachlan Ewbank. But the band’s not famous yet as your first gig is a house party. And like any other up-and-coming band, you’re in need of two things: fans and money.

Using DZ Deathrays back catalogue of 30+ songs, you jam out to gain as much love and tips as possible from your audience. The better you play, the bigger the audience becomes. As you earn money and recognition, you unlock greater abilities, additional tracks, pyrotechnics and, most importantly, bigger stages to perform on.

The majority of these unlockables can be obtained relatively quick with great ease. In no more than an hour, my band was inches away from being ready to hit the main stage with a decent chunk of ability upgrades and songs under our belts. 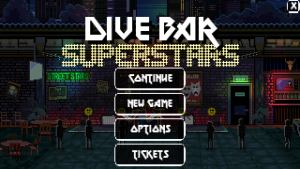 Dive Bar Superstars also throws typical rock band challenges at you, such as rowdy bottle throwing audience members, electrocuting microphones and pyrotechnics. Yes, even the thing that make your shows much more epic can also hurt you. Which is pretty logical. A prime example is the Michael Jackson Pepsi commercial of ‘84. Ergo, these on-stage dangers should be avoided at all costs. But from personal in-game experience, this wasn’t as easy as it sounds.

The Pyrotechnics were especially challenging to deal with. Whether it was a misjudgement of how close I was to them or the wombo-combo of my microphone zapping me into a pyro as it was going off. After one-too-many deaths, I became extremely cautious about making my shows look as awesome as they can. No rock show is perfect. But in this case, everything has to be timed perfectly.

While I definitely didn’t mind rocking out to DZ Deathray’s back catalogue, I was a bit disappointed that I was running out of things to work towards. Games with similar mechanics usually require plenty of grinding to unlock/level new abilities, areas, etc. And yes, even with over 30 songs to unlock there’s a quicker way to do so. But I won’t tell you how.

Understandably, this is Simon Ridley’s first game. And even though there isn’t much to work towards after the first hour or so, he’s done a great job at executing a cool idea of a game. The retro-pixel art style is, as always, multiple ticks of approval for me. The core concept is there but a possible sequel or follow-up of sorts would do even better with upgrades of a higher value or additional unlocks. For example, more outfits, guitars, alternate signage or something like “roadie/groupie power-ups”.

Dive Bar Superstars is available now on the App Store and Google Play.