“For an enhanced version, it not only looked but also felt like I had only just picked it up back in 2012.”

More and more RPG’s from yesteryear are making a return via the Nintendo Switch to fill in that nostalgic void in the hearts of gamers all over. Open-world adventure, Dragon’s Dogma: Dark Arisen, is the latest to be ported from last-gen consoles over onto the increasingly popular portable system. Originally released as only Dragon’s Dogma, Dark Arisen features the expansion, all the DLC and other upgrades. Although it was originally released 7 years ago, this was a relatively new title for me. However for an enhanced version, it not only looked but also felt like I had only just picked it up back in 2012.

While sounding a tad critical straight up, it’s not all cons. There are elements about Dragon’s Dogma: Dark Arisen that do feel aged, however there’s other elements that are still enjoyable. It does of course start off like most other RPG’s. Your character can be fully customized and then follow up by choosing one of three generic vocations. Being a Mage or Fighter (sword and shield) wasn’t appealing to me. However a Strider whose rocking dual blades and a bow & arrow is right up my alley.

No matter what vocation you pick, the story is obviously the same. Your character is known across the land of Gransys as The Arisen. This comes after having your heart literally ripped out of your body, and living to tell the tale, by a dragon whose arrival is believed to mean that the end of the world is nigh. According to legend, the Arisen is believed to be the chosen one to ultimately kill the dragon and save the world from the apocalypse. However this along with a couple of starter quests was the most I could properly follow in regards to the story. 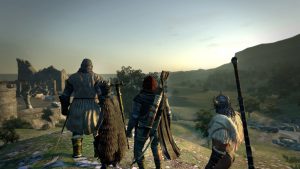 This was mainly due to the poor execution of allowing players to find and follow Quest lines easily. The only place where I knew to find quests were from the notice boards found in main towns. However these mainly consisted of “kill X amount of these” and “escort this person to X”. The rest of the quests worth doing were found on a whim half the time. Simply marking new quest givers on the map along with the already marked notice boards would have made a huge difference. I know that finding the quests along your journey should be part of the adventure but I was slowly getting tired of having to really search for them.

This next part is going to sound very hypocritical. But as much as I didn’t like adventuring around to try and find my next quest, my adventures when I’d a quest to embark on were enjoyable. Mainly when I was given only a marked location in a blank unexplored area. I was never sure what I would find or where I’d end up but there was always excitement and adrenalin running through me. But it wasn’t always smooth sailing, even when I stuck to the main path. Running into smaller enemies like wolves, rogues and goblins and sometimes even the bigger beasts like trolls and dragons kept me on my toes at all times.

Luckily I’m not alone on my journeys with the help of 3 AI pawns who you can swap out and upgrade through out the game. This made combat a lot more enjoyable. However it didn’t feel very fluid to begin with. It did have a bit of getting used to, especially not being able to fully lock onto enemies when trying to melee attack. But after some practice and acquiring a few abilities for myself and my party, the fights became easier and I started to have a lot more fun with them. As a Strider every fight was different since I could choose either to melee or attack at range. Being able to change up my approach depending on what worked best against enemies never made the fights boring for my particular vocation. 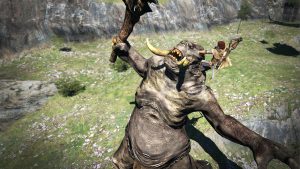 As previously mentioned, this is an enhanced version of an older title. In no way is it a remaster meaning the graphics do look like they came straight from last gen. But since it’s not heavy on HD graphics, the game does run extremely well on the Nintendo Switch, especially in handheld mode. There may have only been a small hand full of times it seemed like the frame rate had dropped but this happened only for a split second. But just because the graphics are aged doesn’t mean the game doesn’t look nice. It does feature some well designed environments and creatures, as well as some alright voice acting through out.

There are areas where it could improve but I still found Dragon’s Dogma: Dark Arisen to be an enjoyable adventure title. Even though it feels exactly like a game from last-gen, I’d still recommend it to any RPG fans who are yet to play.

Dragon’s Dogma: Dark Arisen is out now on Nintendo Switch and I give it a 7.5 out of 10.