“Whilst Earthfall can be played solo, you will have way more fun if you play co-op with mates who can drop in and out through each story mission.”

Earthfall is a co-operative survival game developed by independent developer Holospark for PC, Xbox One and Playstation 4. Starting in Steam early access in April 2017, the game released on July 13, 2018 and is available on all platforms.

In Earthfall, a global meteor strike has devastated Earth and aliens have swarmed the planet. The main characters Jonas, Danny, Roy and Maya must team up to survive together finding weapons, supplies and building defences to try take back the Pacific Northwest. Johnny “Garbz” Garbin, Nathan “Goregrael” Curtis and I played through the first few missions together. 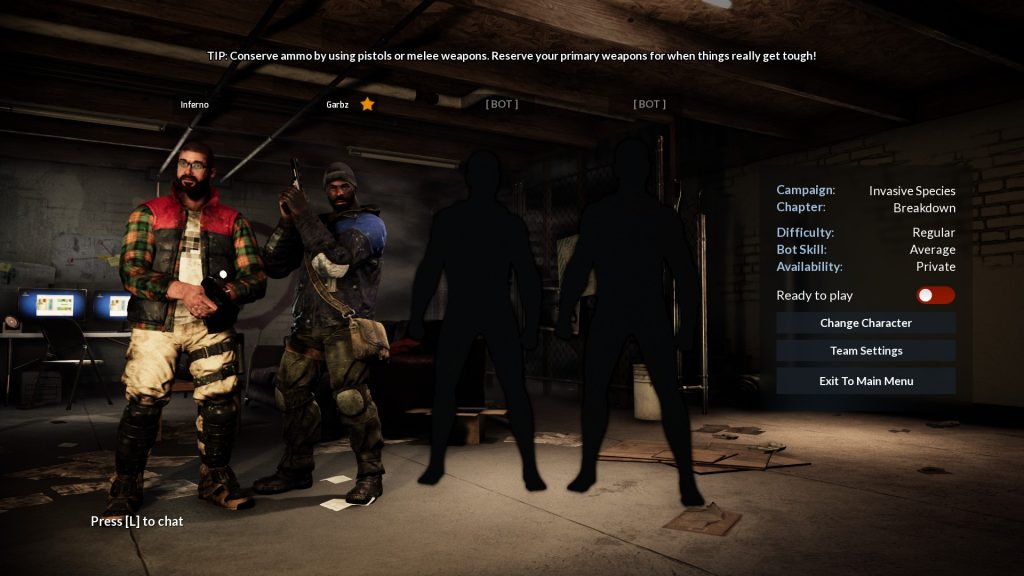 If you’ve played Valve’s Left for Dead series, you will find Earthfall is very similar but with a sci-fi theme to play through. L4D2 was released in 2009 and there haven’t been very many co-op shooters like it since, so I was excited to see Earthfall would give me that playstyle again. There are 10 missions in the game to complete, each telling more of the story about the cataclysmic events that are unfolding. Your awesome foursome must work together to scavenge for supplies and build defences around mission objectives, fighting off swarms of aliens. As you progress, the missions become more complex and teamwork is key as there are multiple objectives to secure and activate whilst the others defend from the alien attacks.

There are various types of aliens to fight such as light and heavy drones, bloated sappers that explode and release poisonous gas, threshers will pin you to the ground trying to chew your face off, whiplash will grab your head in it’s mouth and run off, and watch out for the Beast, a tank of a thing that shoots bolts of plasma at you. Grenades and explosive propane tanks come in handy for this guy. Visual and audio queues quickly alert you to the presence of the more ferocious aliens, so always keep an eye and ear on your team! You can easily be overrun and fail the missions if you forget about your defences and surroundings. 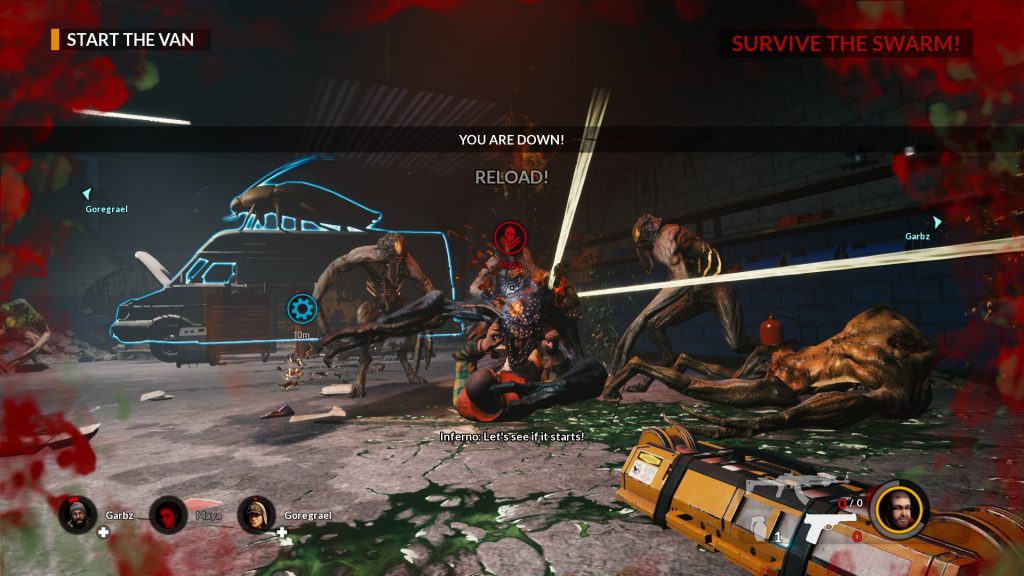 To aid you in this plight, there are barricades that can be set up in doorways, or strategically placed to form choke points or reinforce potential weak spots in your defences. In later missions, these can be enhanced with electricity and fire. Aliens can bash them down after a while, so you can’t just set and forget. Pro-tip: The barricades open when you walk near them, so it’s not the brightest idea to stand too close to them as you shoot aliens on the other side. Who’s the noob with two thumbs up and did this a lot? This guy! Thankfully for me you can deploy gun turrets and if placed right, can really set up some nice kill zones. 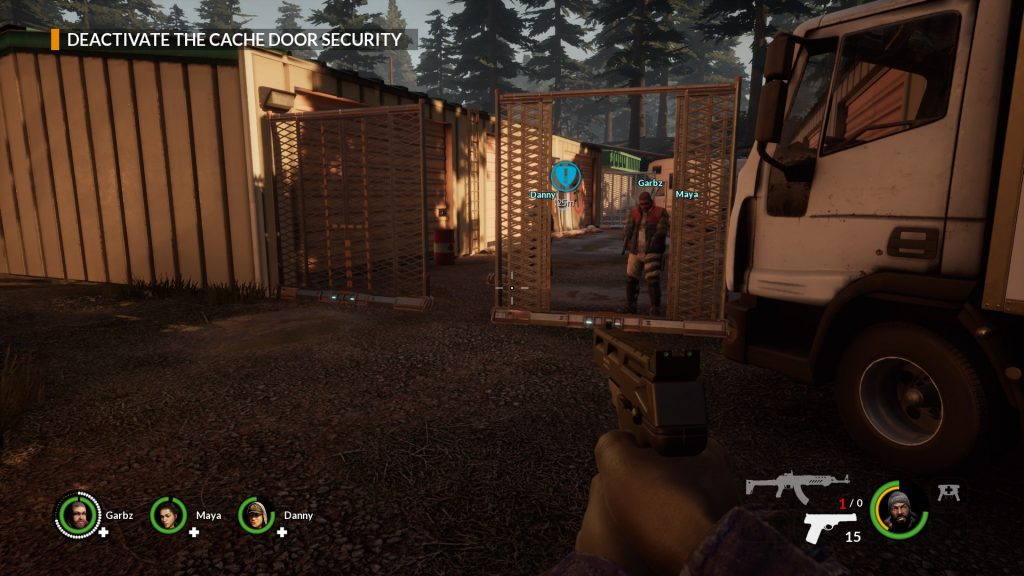 There are also 3D printers that require powering on, which creates noise and is usually followed by an alien swarm, but once turned on can print various weapons for your team and can be an ammo-saviour in some intense fights. There are up to 20 different weapons that can be printed which gives your team a good variety to utilise. These came in very handy as we often ran out of ammo and melee weapons can’t withstand a full swarm, particularly when the larger aliens join the fight. There are also health stations on walls which were very helpful as medkits and stimsticks were rare and you can only carry one of each at a time. 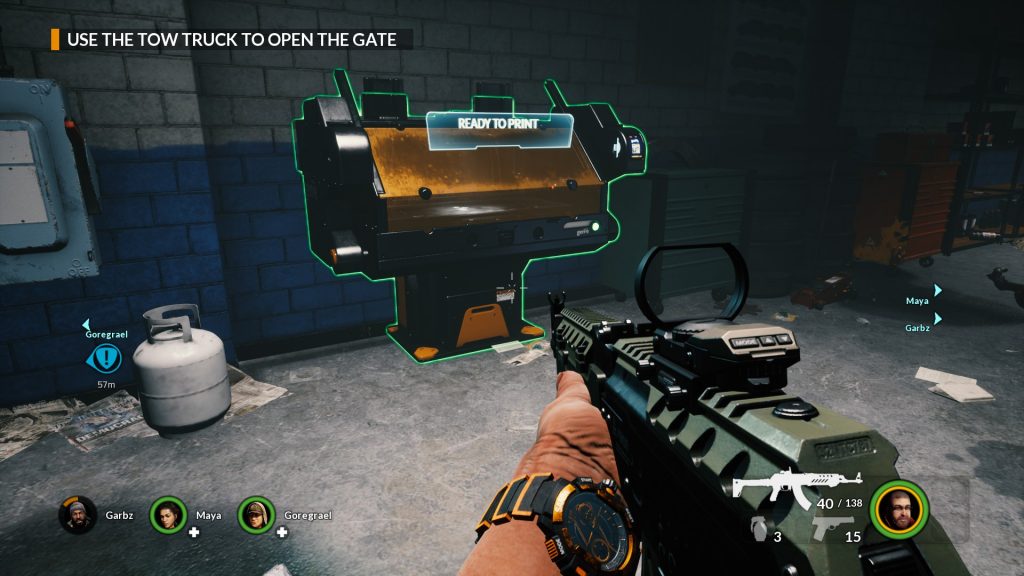 At the end of each mission you will unlock various badges and lore within the game. This lore gives you more of an insight into the main characters – Jonas, Danny, Roy and Maya, as well as the aliens, weapons and explains more detail is provided about each story mission that you may not have picked up during the hectic fighting. They’re well worth reading if you have the time.

Overall, I gave Earthfall a 7/10. Whilst Earthfall can be played solo, you will have way more fun if you play co-op with mates who can drop in and out through each story mission. There is plenty of variety of guns to utilise though ammo can be an issue, but if you find a 3D printer nearby you’ll be ok. The game ran really smooth, even in intense firefights and the graphics are great. Fans of the Left for Dead series will find this game very familiar. I do feel that once you complete all story missions there won’t be much replayability, unless new chapters are released down the track. Even still, it is alot of fun playing with mates.

Earthfall is rated M for violence and online interactivity. You can purchase the game through Steam for US$29.99 and it’s also available on Xbox and Playstation.