Everything is MyCAREER: The NBA 2K21 Lowdown

LAST week we gave you a plethora of information on the new and improved MyTEAM mode in NBA 2K21. Thanks to 2K we were invited to a virtual media event earlier this week with even more information revealed. The main focus for the event was around MyCAREER as well as other returning modes. Unlike my previous article, this won’t be as huge of an information overload.

Gameplay Director, Mike Wang, started off the presentation by talking about some of the features we already know about NBA 2K21. However there were a few extra unknown pieces of information he touched on. The 6’8” Point Guards for example was a feature requested by cover athlete Damien Lillard. He also says that this years Signature Motion Styles have been made to be more responsive and have better weight and momentum.

The return of the Shot Stick was also touched upon later in the Q&A portion. As a returning gameplay feature unseen since 2K17, Shot Stick has since been improved. Instead of finding the perfect groove to shoot your shot, you’ll now have to work it around players trying to cover you. There was other gameplay info revealed during the Q&A like the overall positive feedback about the demo. The late nature of the demos launch in comparison to other games was also spoken about. And sadly, it was confirmed there will be no cross-platform capability either. 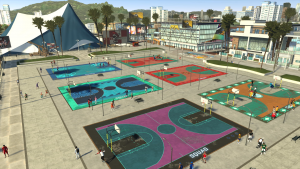 Before talking deeper about MyCAREER mode for this year, the latest trailer for said mode was revealed to us after the event. Mike mentioned to us before talking more about MyCAREER how the goal for NBA 2K21 was to make the game more fun. And this trailer screamed fun (and that one song you’ve probably heard on TikTok) as it revealed this years Neighbourhood, 2K Beach. The online player hub was also present in the Everything is Game trailer but was more of a “blink and you’ll miss” moment. Inspired by Southern California, 2K Beach is a more vibrant and open looking setting for your MyPLAYER to hang out. It also features a mural in tribute to the late Kobe Bryant in the style of the Mamba Forever Edition cover-art. The same features seen in previous Neighbourhoods look to also be available this year. Overall, 2K Beach is a bright and refreshing visual we need during such a hard time where we can also spend time with our friends.

The more dramatic MyCAREER side of the trailer gives us a look into the latest story narrative, titled ‘The Long Shadow.’ During the event, we were told they wouldn’t give us the meaning of the title and that we would have to wait to see for ourselves. The story of course talks about a young basketball player named Junior. Junior’s passionate about the game and wants to make it into the NBA. It’s the same formula where we see a young up and coming baller on his journey from College basketball right through to the NBA.

However, the formula has been slightly added to this year. The first few games in MyCAREER are played in high school. From there you’ll be able to pick from 10 officially licensed college programs. You’ll also have a choice of two different agents to choose from which will change how you kick-off your career. These additions were made to give it a more authentic to real life decisions and make the career feel like your own. This years MyCAREER also stars actors such as Jesse Williams, Michael K. Williams, Djimon Hounsou and Mireille Enos. Cover athletes Damian Lillard and Zion Williamson will also feature within the story narrative. These details are all we know about The Long Shadow but I have a feeling that we may get a warm yet emotional surprise from the story. 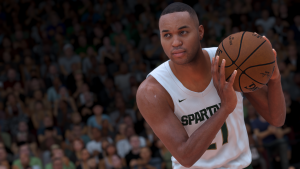 The devs mentioned at the end of the event that there will be a mode for everyone this year. Personally, the MyCAREER, MyTEAM and Play Now modes will be the most frequented. There are other modes making a return this year as well including the WNBA, featuring all 12 league teams in both Play Now and Season Modes. MyGM/MyLEAGUE is also back where you get to play boss over players/teams. The dev team also mentioned that MyLEAGUE will have something called the boom-bust system. This is a system that’s apparently been around before this gen. Without trying to explain in detail without getting it wrong, basically every time you play through MyLEAGUE you’ll have a different result.

Keep an eye out for more NBA 2K21 content as we reach the games launch on September 4.