Everything revealed at the Bethesda E3 Show

Yesterday we saw the fifth annual Bethesda E3 show and the excitement was as high as ever. However, I don’t think anyone was as excited as a gentlemen in the front row of the live show who was screaming “YEAAAHH!!” every chance he could. What a legend! We saw a heap of trailers for updates to current games, release dates for upcoming games as well some new entries to the Bethesda lineup. I enjoy the opening to each Bethesda show as it gives us a glimpse into the lives of the development team and this year we heard how developers played their favourite games as children and now are working on the next generation of those games. 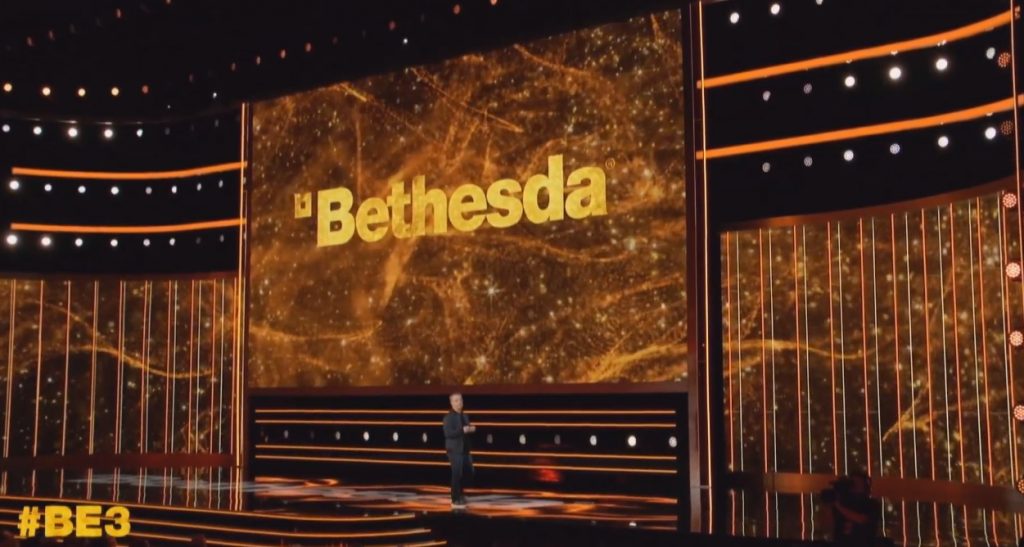 After ‘Uncle’ Pete Hines opened the show, Executive Producer Todd Howard took to the stage with the Fallout 76 logo on screen. Straight up he acknowledged the rocky first few months of “a game we had never made before”. “We had a lot of difficulties at launch and we got a lot of well deserved criticism.” He then went on to say it is a credit to his development team that have stuck at fixing the game, and also acknowledged the support of players that continue to play the game. “It’s one of the best online communities we’ve ever seen, everyone’s nice to each other. This should give us hope for humanity when the apocalypse does come.”

The focus then changed to Elder Scrolls: Blades where Project Leader Craig Lafferty and Art Director Matt Carafano announced Blades has received it’s first major update adding NPC voiceovers, a new dragon questline (Dragons would become the theme, new jewelry and decorations, new jobs and solo arena battles, plus more. They then announced that Elder Scrolls: Blades will be available for free on the Nintendo Switch, dubbing it “Switch Blades!” How cool.

The show switched back to Fallout 76 where Project Leader Jeff Gardiner and Co-Studio Director Tom Mustaine revealed two huge free updates. Year 2 of Fallout 76 will begin with the Wastelanders update which adds what a lot of players have been wanting – human NPCs and a brand-new questline with real conversation choices and consequence.

As part of a freshly announced Free Trial Week from June 11 through June 18, players will also get a sneak peek at Nuclear Winter, which puts a Fallout spin on the battle royale genre. To help new players learn about the game and players who are returning, Bethesda have released a great new player guide. After watching my wife start a new character and fumble her way through learning the game, I feel this newcomer’s guide is perfectly timed. The second update announced was Nuclear Winter, a 52-player battle royale mode with a beta test available as part of this free trial week. Scavenge for weapons, supplies and nukes as you face off against fellow players in the fight for the right to become the Overseer of Vault 51. A battle royale in a Fallout setting sounds pretty cool and I’m definitely going to give it a go.

Todd Howard returned to the stage briefly to give a nod to the developers and work continuing on Starfield and Elder Scrolls VI, then introduced to the stage the Executive Producer of Tango Gameworks, Shinji Mikami. Tango Gameworks is the studio behind The Evil Within and announced they are entering the action-adventure space with the newly announced GhostWire: Tokyo. Mikami, along with their lovely and animated Creative Director Ikumi Nakamura explained the “spooky” game. “After strange disappearances hit Tokyo’s population, it’s up to you to uncover the source and purge the city of a strange, new evil. Armed with your own mysterious abilities, you will face down the occult, unravel conspiracy theories and experience urban legends like never before.”

Frior also teased the next two content updates coming in the second half of 2019 – Scalebreaker and Dragonhold DLCs. This got a big cheer from my wife and I. Scalebreaker is set to arrive in Q3 and brings two new dungeons – Moongrave Fane and Lair of Maarselok. Both of these challenging new dungeons are part of the Season of the Dragon storyline, pitting you and your team against Dragons like the ones faced in Elsweyr. Coming late 2019, you can experience the exciting end of the Season of the Dragon adventure with Dragonhold, the final DLC of the year. Dragonhold brings a whole new zone to explore in Southern Elsweyr called Pellitine, a lawless wasteland impacted by a deadly plague almost 20 years ago. There, you must gather allies (including fan-favorite Sai Sahan), reform the ancient Dragonguard order, develop powerful new tools and weapons, and put an end to the Dragon menace before it threatens to engulf all of Tamriel. 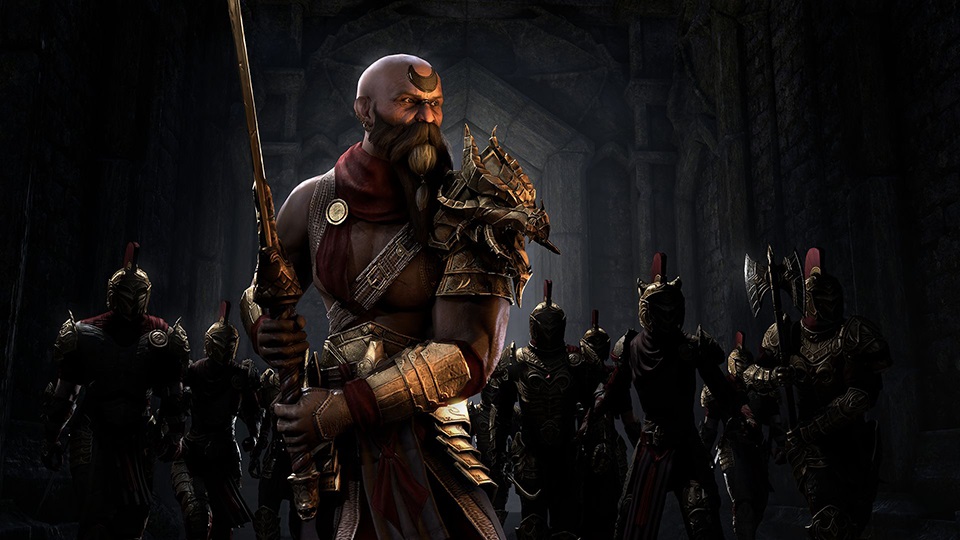 That “YEEAAH!!” guy is going to have a hoarse throat today I imagine! Next on stage was an unannounced project that Zenimax has been working on. I was secretly hoping for a new MMORPG IP, but instead we were shown a trailer for a new entry to the Commander Keen series coming to iOS and Android devices. The game’s Creative Director Kira Schlitt explained, “With the new Commander Keen, we wanted to stay true to the platforming history of the original series, while making gameplay feel mobile-first. There’s a lot of slap-happy nonsense in our brand-new gadget-based action, particularly in Battle Mode.”

The Elder Scrolls: Legends received a new live-action trailer titled ‘Make Your Play’. The possibilities for the decks you create become even greater with the announcement of Moons of Elsweyr, a brand-new card pack expansion coming to the game June 27.

RAGE 2 was next onto the stage. There was no Andrew W.K craziness this year, replaced with an 80’s sitcom music trailer showcasing a whole bunch of new free additions to the game including new vehicles (hello pilotable MECH!), enemies, cheats and in-game events. They also shed a little light on the Rise of the Ghosts expansion, coming later this year.

Executive Producer of Machinegames, Jerk Gustafsson then talked about Wolfenstein: Youngblood which now includes cop-op either solo with an AI or with a mate online. As BJ Blazkowicz’s twin daughters, Jess and Soph, you’ll take to the streets of 80s Nazi-occupied Paris as you search for your father. Establish a home base in the Parisian Catacombs and take on missions in any order you want. If you choose to roll solo, you’ll be paired up with an AI companion. As you complete missions, you’ll level up and unlock unique abilities, weapon attachments, gadgets, cosmetics and more. Wolfenstein: Youngblood releases July 26 for PlayStation 4, Xbox One, Nintendo Switch and PC. Also launching in July, take the battle to virtual reality with Wolfenstein: Cyberpilot, where you’ll join the French Resistance and hack into mechanized infantry to use against the Nazis!

The team at Arkane Lyon, with Game Director Dinga Bakaba and Art Director Sebastien Mitton, invited us to the lawless island of Blackreef in the newly announced Deathloop. “I think it’s really f**king cool” said Mitton, with Arkane Studios being the ones that bought us the Dishonored series. “Explore stunning environments and meticulously designed levels in an immersive gameplay experience that lets you approach every situation any way you like. Hunt down targets all over the island in an effort to put an end to the cycle once and for all, and remember, if at first you don’t succeed… die, die again.”

id Software’s Chief Technology Officer Robert Duffy and Bethesda’s Director of Publishing James Altman, presented a new streaming technology called Project Orion. Set to rival Google’s Stadia and Microsoft’s Project xCloud, Project Orion can enhance a game engine’s performance when streaming from the cloud, enabling games to stream with greatly reduced latency and bandwidth. “Consumers demand low latency when playing high-performance games, and those games need to be playable by a mass audience – not just those near a datacenter, or those with lightning-fast internet speeds,” said Altman. “With Orion, players can live far from data centers and still be able to stream DOOM at 60 FPS, with 4K resolution and without perceptible latency. An Orion-enabled game will be faster, more fluid, and provide a fundamentally better streaming experience for fans.” id Software’s work on innovative technology has come a long way – pictured here is Tim Willits wearing their very first VR headset – yes, that’s duct tape holding it together. 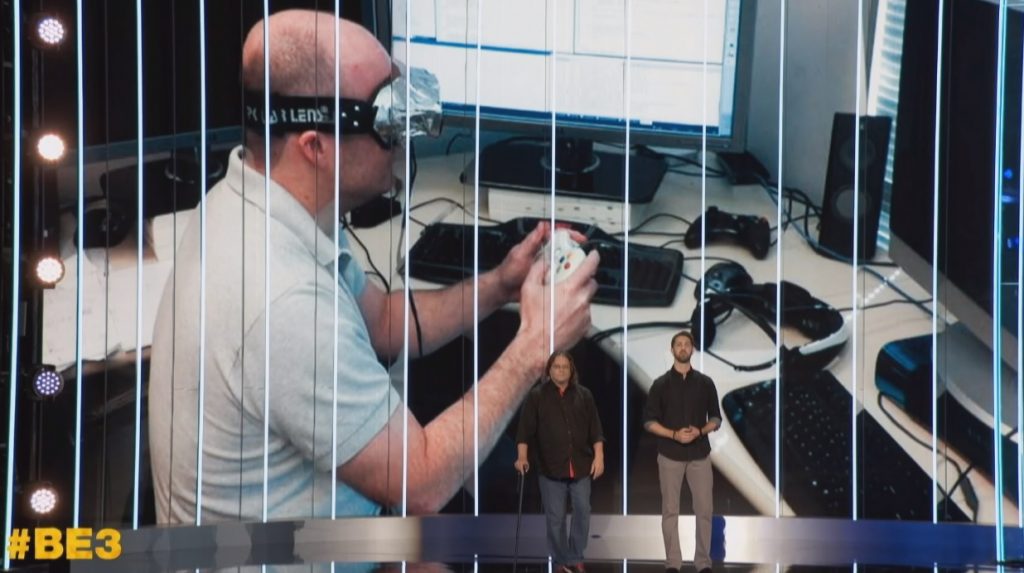 And now, the game we have all been waiting for, Doom Eternal, the follow up to 2016’s Doom. We were treated with a new single-player campaign trailer which looked very cool. “In DOOM Eternal, fight through the relentless demon onslaught with unmatched speed, devastating weaponry and evolved aggression-first combat as the legendary DOOM Slayer.”

Creative Director Hugo Martin and Executive Producer Marty Stratton gave us an overview of a multiplayer battlemode and a release date of November 22 for Xbox One, PlayStation 4, Steam, Bethesda.net, Nintendo Switch, and Stadia. “Add extra oomph to your slaying experience with the DOOM Eternal Deluxe Edition. The Deluxe Edition includes the DOOM Eternal game plus bonus cosmetic content and the DOOM Eternal Year One Pass, adding more demon-decimating single-player content set to release within the first year after launch!” 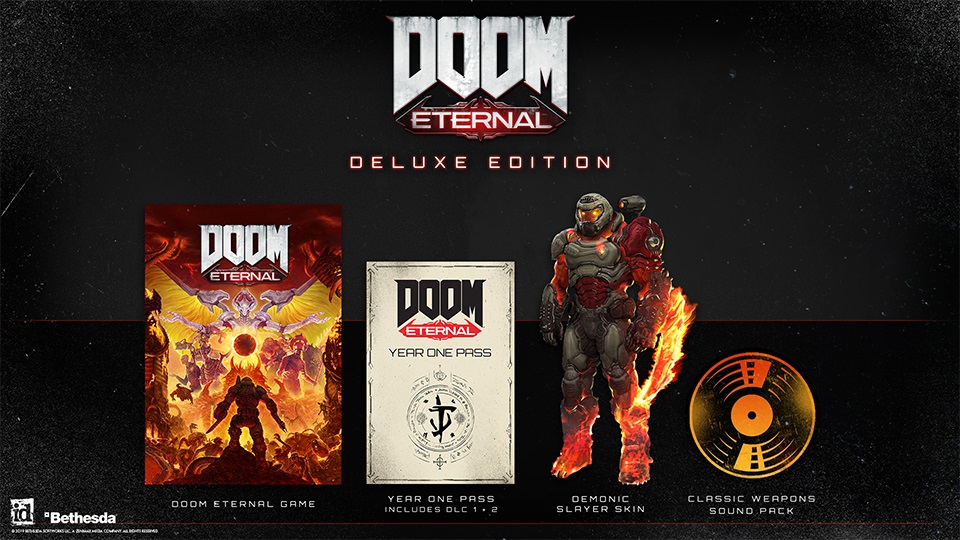 “In BATTLEMODE, one player takes on the role of the DOOM Slayer while two others play as demons. The Slayer comes packing a full arsenal to take on the deadly duo of baddies, ranging from the jetpacking Revenant to the thick-skinned Mancubus, in a best-of-five fight to the death. Each class of demon has unique movement options, attacks and abilities to challenge the Slayer’s skills, making BATTLEMODE a lightning-fast blend of raw action and clever strategy.”

Finally, Uncle Pete returned to the stage and, given 2019 is the 25th year of Doom, QuakeCon is going to be giving some extra spotlight to Doom, in the form of QuakeCon – Year of Doom. 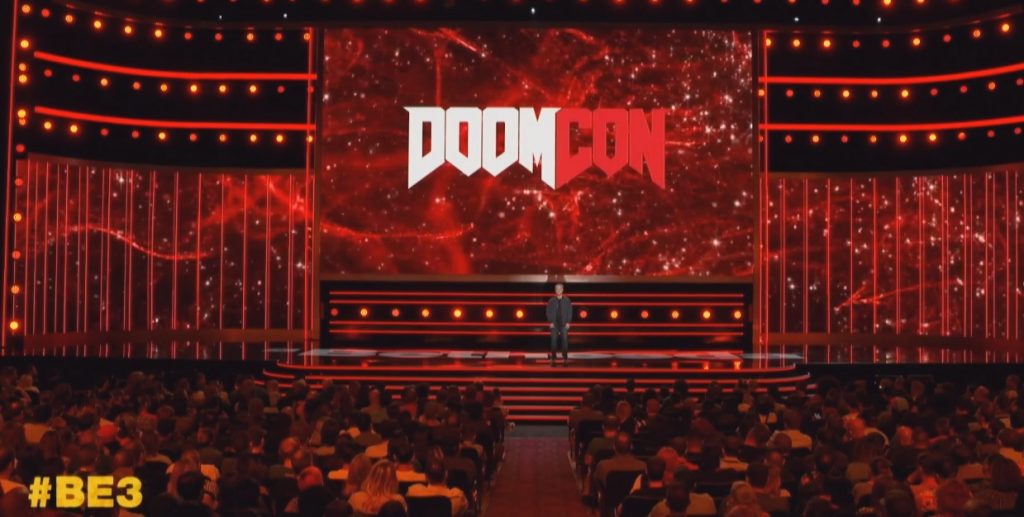 I see what you did there Pete! QuakeCon will occur in Dallas, Texas (July 25-26), coinciding with the release of Wolfenstein: Youngblood. So there we have it, Bethesda E3 2019 in all it’s amazing glory. What was your best take from this show? Let us know on Facebook or Twitter. Game on legends!