Everything we know about Destiny 2 so far..

Following the logo and teaser trailer feature Cayde-6 this week, Bungie has revealed a heap of information plus the full length trailer for Destiny 2:

In the trailer we see two separate groups, one being rallied by Cayde-6 (albeit not that well) who is standing by Ikora Ray, and the other being rallied by Commander Zavala, interspersed with cut scenes of the Tower, and everything in it being destroyed. It appears as though the vanguard groups were separated during the battle.

Wait.. EVERYTHING in it being destroyed?! As in all of our loot? 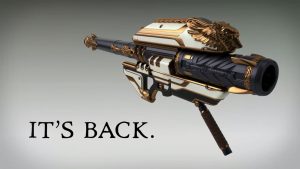 The trailer doesn’t show any actual gameplay — coming in May — but it did provide a narrative-based excuse for the game to remove your gear from the first game, even though you’ll be able to carry over your character.

“We know that, just like us, you have grown fond of the Guardians you’ve created, so we do plan to preserve your character personalisation,” Bungie said in a blog post. “We are going to recognise the dedication and passion you’ve shown for this world. Specifically, the class, race, gender, face, hair, and marking selections for all characters that have achieved Level 20 and completed the Black Garden story mission will carry forward. We also plan to award those veteran accounts with honours that reflect your Destiny 1 accomplishments.”

But you’ll lose “power, possessions, and Eververse-related items and currency.”

The tower is destroyed along with every single bit of loot you ever collected.

We also have a new big baddie – “Ghaul”, a Cabal who leads an army called the Red Legion.. they’re the ones who took all our sh*t!

“It allows us to introduce the major advancements and improvements that all of us expect from a sequel, ensuring it will be the best game we can create, unencumbered by the past,” Bungie has said. “We’re looking forward to sharing more details with you later this year for how we will honour your legacy in the future.”

In terms of the story, this is all we really know so far, and it’s safe to say we’re not overly amused.. (*disclaimer: we’re hoping Bungie in all it’s wisdom knows what it is doing, and is going to pleasantly surprise us… PLEASE PLEASE BUNGIE PLEASE)

Everything else we know:

Pre-orders are available online now which include early access to the Beta.

There are heaps of editions to choose from also:

Eb Games has an exclusive Cayde-6 figurine if you pre-order with them:

No word yet from other retailers about any pre-order exclusives they may have.