Everything You Need to Know About Street Power Football

THERE’S only a small handful of well known casual street sports video games on the market, the most common involving basketball. And if we want to go even deeper, the plethora of mini-golf games that are also available. But what about street football? (Or soccer as us Aussies call it.) To my knowledge there’s little to no street code soccer titles out there, but a small indie studio by the name of SFL Interactive are about to bring their own flare to the sports genre.

Last week, I attended a virtual hands-off preview of SFL’s new arcade-style game, Street Power Football. Straight off the bat, this gave me major NBA2K Playgrounds vibes, as it should. The video that was presented showed cutscenes from the game featuring cartoon like graphics similar to those in Playgrounds. The development team told us how they were fans of games such as Mario Slam and NBA Jam. These sorts of games had obviously given them a lot of inspiration. After noticing that there wasn’t an arcade-style street football game on the market, they decided to create their own. After two years, that same idea has been brought to life. But the final product they’re releasing later in the year wasn’t what the team had originally envisioned. Street Power Football was going to be a straight up arcade game, SFL Interactive wanted something that could be played quickly. That was until French freestyle footballer Séan Garnier gave some creative input. The fast games were still kept but this is when Street Power Football’s flavour was born.

Twenty-five of the best freestyle footballers in the world, including Australia’s own Daniel Cappellero, worked with SFL Interactive to bring Street Power Football to life. Between game footage presented in the trailer were cuts to behind the scenes video of freestyle footballers doing all sorts cool moves and tricks. But instead of being decked out in all of their trendy gear, which in-game will include more than 300 items, they were all wearing motion capture suits. Every single move you see in Street Power Football are the players performing said moves themselves. The team wanted to included the best in class animation but also the upmost realism of movement. 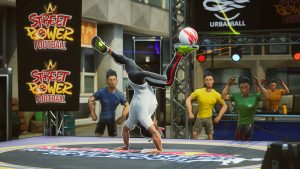 So far the game looks pretty awesome visually, even though full motion video of Séan Garnier talking to us while standing within the animated game world seemed a bit off personally. But what gameplay does Street Power Football offer? The modes made available aren’t just straight up football matches and are a varied mixture of different tastes. The team wanted to deliver multiple disciplines that were not only easy to pickup but challenging to master. The first mode shown to us was Freestyle mode, a rhythm like mini-game where you enter in different button combinations to the beat of a freestylers moves. If successful, the player executes the trick that matches the button combination. There are 90 different tricks available but will only unlock via progression. Next up was Trickshot Mode which as frustrating as it may have looked, this could be my future favourite. Under the pressure of a time limit, players must go around the field destroying different targets and can only progress once all the targets are destroyed. Each target is set at a different height and distance so aim and power precision are vital.

Street Power Football isn’t all just fun little mini-games, moving onto some versus action also brings some football education. Panna: a technique used in association football, field hockey or basketball, in which a player rolls or throws the ball between an opponent’s legs (feet). Panna is also a short 1-on-1 game of football where you try to make a panna move to get the ball into the goal. The first to 5 points in this game mode wins. Moving onto a much larger playing field is Streetmatch Mode where either 1v1, 2v2 or 3v3 matches can be played. But there’s a fun twist to this mode showing the game doesn’t take itself too seriously. Throughout the 5 minute max. matches you’ll find consumables on the field so which include special abilities. Each player also has their own unique abilities which can be executed once their Super Bar fills up. Filling up your Super requires you to play with style so try and perform as many tricks as you can. Although this mode comes off as extremely casual, it does take some skill to master it. One example a unique ability where a 2 second shield can be placed in front of a goal. With such a small amount of time allowed you can’t just pull this skill off whenever you want. The devs also mentioned that team player choice is vital in regards to who’s best for offensive and defensive. 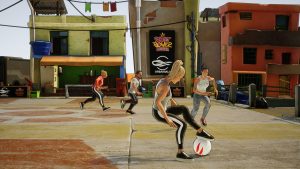 All of the above modes mentioned are both PVP and PVE but there’s one more mode which was almost forgotten about during the presentation. Elimination is a 1v1 PVP only mode which can be played either through local multiplayer or online. Teams of three verse each other one at a time until one team knocks out every player on the opposing team. I asked the devs why Elimination was only made as a PVP mode and the answer was simply because versing the AI was too easy. Elimination is meant to be a challenge, a true test of skill. The AI just made the experience feel too simple. Among the plethora of casual modes is also a story mode which is, of course, PVE.

As mentioned earlier, there’s a tonne of apparel to deck your players out in which to my surprise also includes tattoos. All customizations can be purchased via the shop within the game. I also asked the devs about the brands featured in the game after seeing Séan Garnier’s Red Bull hat make an appearance. Along with confirming Red Bull, the other brands included in Street Power Football are Séan Garnier’s own brand, Urban Ball, as well as popular street football brand, Panna House.

As someone who’s never been interested in street football, I could see myself picking this one up just based on the fun modes made available. Street Power Football will be available on Playstation 4, Xbox One, Switch and Steam later this year.