After wrapping up it’s 300+ episode run on TV in 2019, Fairy Tail has continued to share the adventures of their wizard guild in the form of a turn-based action RPG. While the beginning few hours go at a snails pace, Fairy Tail eventually showed it’s potential during my whopping 40 hours of gameplay without feeling like an object of merchandising.

This isn’t Fairy Tail’s first video game rodeo either with a string of games mainly of the fighting genre released for the Playstation Portable and Nintendo DS. However these were barely seen outside of Japan. This game however has made its way over to the Western world, steering away from being an anime-based fighting game seen multiple times in the past. After opening up with a generic tutorial like fight, the story begins with our main protagonist, Natsu, visiting the Fairy Tail guild house. To quickly summarize in a nut-shell, Natsu is a wizard as well as a member of the wizard guild, Fairy Tail. Of the hundreds of guilds out there, Fairy Tail was one of the best…until now.

It’s been seven years since both Tenrou Island disappeared and the original Fairy Tail guild house has been visited. And Natsu returns to find it looking extremely dilapidated. To build it back up to its former glory, upgrades to each sector are needed. Which is when Natsu is also directed to the Request Board. As someone who wasn’t overly familiar with the Fairy Tail manga/anime, the references went straight over my head. My first thought was “oh…it’s that sort of game,” reminding me of a similar sounding game I’ve reviewed in the past. Little did I know there was more to this Request Board than I initially thought. 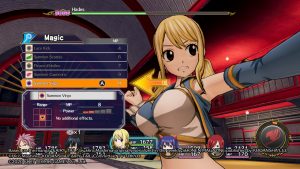 I haven’t watched an episode of Fairy Tail in years and at one point during my game time, I knew I had to go back for a brief refresher. There are many references made to quirks in the TV series. And if you’ve never seen Fairy Tail, they’ll either go straight over your head or will have you sitting there in confusion. Like, why is Gray losing his clothes over and over again? Or why is Natsu always being a creep in Lucy’s house? And what’s with all over-the-top BEWBS!?

That last one wasn’t a surprise though and there’s even a bit of side-story regarding size. Breasts aside, this Request Board was also one of those key references and is how wizards get most of their jobs. Luckily, this and the guild upgrades aren’t the main focus of the game. However they are an important staple as they both offering rewards as well as stat upgrades.

There’s a few main plots covered over the nine chapters, mainly to do with Fairy Tail’s participation in the Grand Magic Games. This storyline covers your progression as a guild to become the top wizard guild once again. Getting to the Games though felt like a bit of a slog. The first couple of hours don’t feel like you’re playing the game yourself just yet. Whether or not it was because of my ability to pick stuff up easily, Fairy Tail somewhat stays in the tutorial phase for a lot longer than it should have.

Fairy Tail’s combat system is a mixture of turn-based and strategic attacks. While traditional turn-based attacks are auto-aimed at one or multiple parties, the enemy playing field in Fairy Tail is divided into squares. Each character’s attacks cover different surface areas and allows you to change things up depending on enemy locations. This also helps keep things somewhat fresh. But even while playing on normal difficulty, combat felt way too easy once a full party of five is brought into the mix. And if you look after your party with both guild and equipable upgrades, you’ll breeze through most situations. It’s not until the games final quarter where the difficulty was more balanced and I felt like I actually had to try. 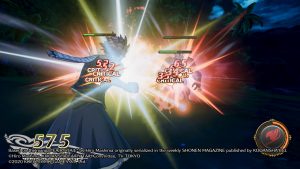 Once the three-hour long tutorial was out of the way, the story then took its time to shape up. The first half wasn’t overly exciting as it focuses mainly on the participation in the Grand Magic Games. It felt somewhat dragged out, tedious and sometimes unnecessary. It was the storylines that followed however which truly showed Fairy Tail’s ability to grab my attention. Of course every good ending is a show-stopper but I wish the story kept up to this level throughout.

There were also large gaps between story missions where you had to “become stronger” to face your next task. These also came with large clusters of optional character missions. Which for me I’m not overly opposed to completing since they were both rewarding and sometimes unlocked characters to join you. However I would have preferred them to be a lot more scattered.

The story, requests and other optional missions send Natsu and the rest of the guild out into an open-world lite setting. Personally, most of these areas seemed more so a farming ground of enemies as opposed to locations worthy of exploring. Most enemies will either change or scale depending on progression. I wouldn’t say the balance of level scaling is always there either as it jumped to a whopping level 80 towards the end while my team was still in the early level 60’s. But as previously mentioned, it was nice that I actually had to start making some sort of effort in combat.

There’s also treasure chests scattered through-out and areas that can be unlocked if your team are strong enough. While you will gain a fair chunk of in-game currency on the rare occasion, the majority of the time these offer lackluster rewards and it’s what stopping me from going back to get the remainder.

Unlocking all the places and grabbing all the loot aren’t the only things you can do once finishing the main campaign. I could predict halfway through the story that there would be an endgame but after completing its scenario, I still felt conflicted. Fully explaining why would require entering spoiler territory so all I’ll say is that I wish it focused around a different story arc for certain reasons. Overall, the rest of it is mainly about grinding out Requests. And from what I can tell, there’s no end to leveling Natsu and the rest of the gang. 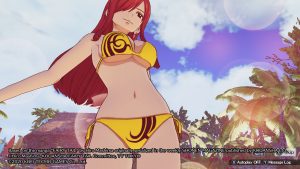 I’m unsure how this fairs on other platforms but while reviewing Fairy Tail on Nintendo Switch, I noticed frequent framerate drops in “heavily populated” areas. Whether it’s the game itself or the platform, I’d suggest getting the game on other platforms if it’s a case of the latter. But for the most part, the visuals look relatively okay throughout, with a bold outlined 3D aesthetic to keep with the illustrated anime look. There were also some creatively lit scenes where the character models popped, making them look a lot better in as opposed to the games basic lighting.

All of the character dialogue is also in full Japanese to also keep with the theme, which means there’s a lot of reading to be done during cutscenes. However, I’m unsure if there will ever be a patch where you can choose to have either Japanese or English voice dialogue.

Fairy Tail starts slow, speeds up and then eventually slows down again. It’s not the greatest RPG I’ve come across in terms of gameplay but it’s one I’d still recommend for fans of the anime/manga and turned-based combat.

Fairy Tail is out now on Playstation 4, Nintendo Switch and Steam.