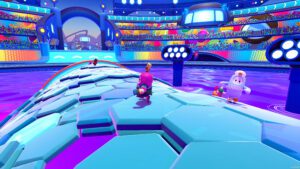 The wildly chaotic, battle royale-like party game, Fall Guys, has finally launched on all platforms. Up until today, Fall Guys was available for purchase on all platforms except the Xbox family of consoles and Nintendo Switch. However that’s no longer the case, thanks to the launch of Free For All. And yes, it’s free-to-play.

Fall Guys: Free For All is now available across all platforms and is even cross-platform compatible. But there’s a catch for new players wanting to play on PC. While Fall Guys has always been available on Steam, Free For All won’t be. Instead, new players will have to play via the Epic Store. However, existing Fall Guys players on Steam will still have access to the game.’

Free For All comes with a plethora of new content. Including new rounds, obstacles, Season Pass, and a new currency. The new currency, called Show-Bucks, is similar to V-Bucks in Fortnite and can be obtained progression and with real money. Show-Bucks can be used to purchase items within the Fall Guys Store, as well as current and future Season Passes.

Existing players of Fall Guys who purchased the game before its Free-to Play status will also receive a Legacy Pack. This includes the first Season Pass for free as well a plethora of cosmetic items, which can be previewed below.

All you have to do to participate is head on down to the Emporium between now and June 26 and guess how many jelly beans are inside the 2-metre high container. Guessing correctly will land you 150kg of jelly beans (a years supply) as well as a plethora of other prizes.

Valued at $1,223, prizes include said years supply of jelly beans, a jelly bean vending machine, Fall Guys merchandise (including figurines, plush toys and a beanie) and an in-game mohawk cosmetic. 2nd-5th place winners and 5 runners up will also win smaller prizes similar to that of first place. 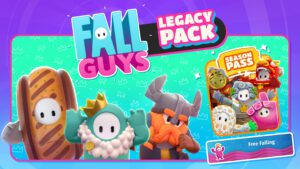