Fallout 76 released back in mid-November 2018 to a mixed reception. I and a number of others really enjoyed it and still do, though it wasn’t without it’s issues at launch and over the next few months of development. You can read Pete’s review of the game here. To their credit, Bethesda have been pumping out bug fixes on a regular basis and after reaching their 100 day milestone, have put out a roadmap of content for 2019. Here’s some of what they said on their official website:

“There’s nothing like the start of something new – for you and for us, and having millions of you join us on this new adventure is humbling for our studio. Thank you for sticking with us as we figure this online experience out together, and we do mean ‘together.’

Thanks to your continuous feedback, we have been able to fix many of the top issues and have made numerous improvements to the game. We also make scores of changes under the hood that aren’t as visible. These include changes to improve performance, detect new exploits, and make the experience smoother for everyone. There’s still work to do, but we’re happy to report that game and server stability has increased over 300% since launch. We’re thrilled by how much everyone is playing, with an average time of 4 hours a day.

However, we know the game had a difficult launch, and we’ve made mistakes along the way. We share in your frustrations when we do. We’ll probably make a few more, and when we do, we will work to correct them as quickly as possible. Know that we’re fully dedicated to making this game the best it can be – and even more so, a platform for endless Fallout adventures for years to come.

To that end, we’re excited to announce some of the new free content we’ve been working on for Fallout 76 in 2019.

Thanks again for sticking with us. It’s a privilege to have such passionate and caring fans. We have big plans for 2019 and we’d love to hear your continued feedback on everything we’re doing. We hope you’ll keep sharing your thoughts with us on the forums, Reddit, in videos, and streams. Your voices push us to do better and your support has meant everything to us. We’ll do our best to earn it.”

The extensive roadmap includes new quests, a new PvP survival mode, high level raid vaults and many other new features including a brewing and distilling crafting station and improvements to the C.A.M.P blueprint system (coming with a patch on March 13). Bethesda have gone into detail with the first of the content updates releasing this week with Wild Appalachia. 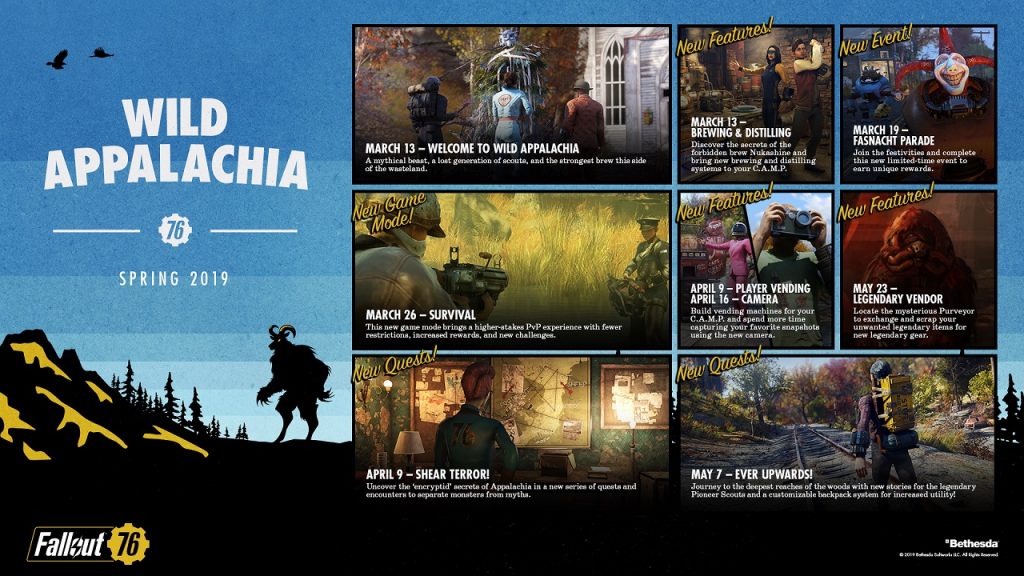 A mythical beast, a lost generation of scouts, and the strongest brew this side of the wasteland. Welcome to Wild Appalachia – a series of new quests, features, events, crafting systems and more starting on March 13 and appearing over several weeks. Wild Appalachia includes:

Summer will bring another series of major updates to Fallout 76, including Nuclear Winter – an entirely new way to play that changes the rules of the wasteland.

Embark on a tale with true choice and consequences in Wastelanders – our biggest and most ambitious update for 76. Wastelanders will include a new main questline, new factions, new events, new features and even more surprises.

New factions? Could we actually be seeing some NPC factions?! That would certainly add a much wanted element to the game but we’ll just have to wait and see. I’ll certainly be checking out these changes to Fallout 76 as they release and looking forward to getting back into Appalachia.