Nuclear Winter is a new battle royale mode for Fallout 76, currently in public beta testing until June 17, consisting of games with up to 52 players. The smaller number of total players means the games don’t last long at all (longest game I’ve had was around 15 minutes and we came third) so you can get back into the next game quickly. It features an enclosing firestorm with a shrinking safe zone much like the other battle royales and the Fallout environment is perfectly suited for this style of gameplay. 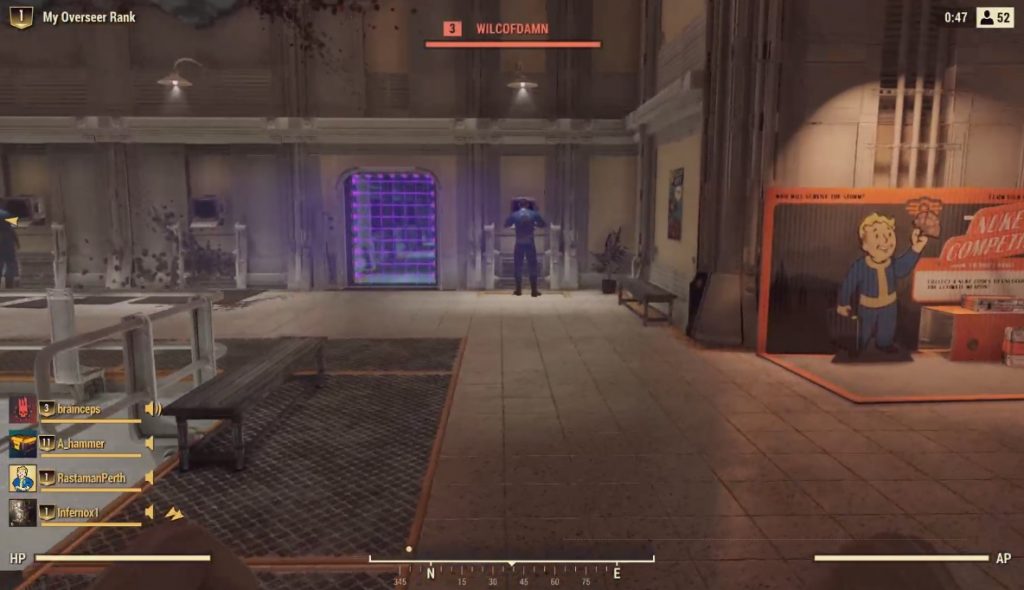 You can start a match with up to 4 of your friends and the game will automatically fill your  team up to 4. You can turn off auto-matchmaking to queue solo but I prefer to have strength in numbers as usually you will end up fighting part or all of a squad in the final zone. Everyone starts out fresh each game and you’re only rewarded with cosmetics. As you level up your Overseer rank, you will be able to unlock different areas within Vault 51 to find out the history behind it’s existence. I’m looking forward to seeing these locked areas. 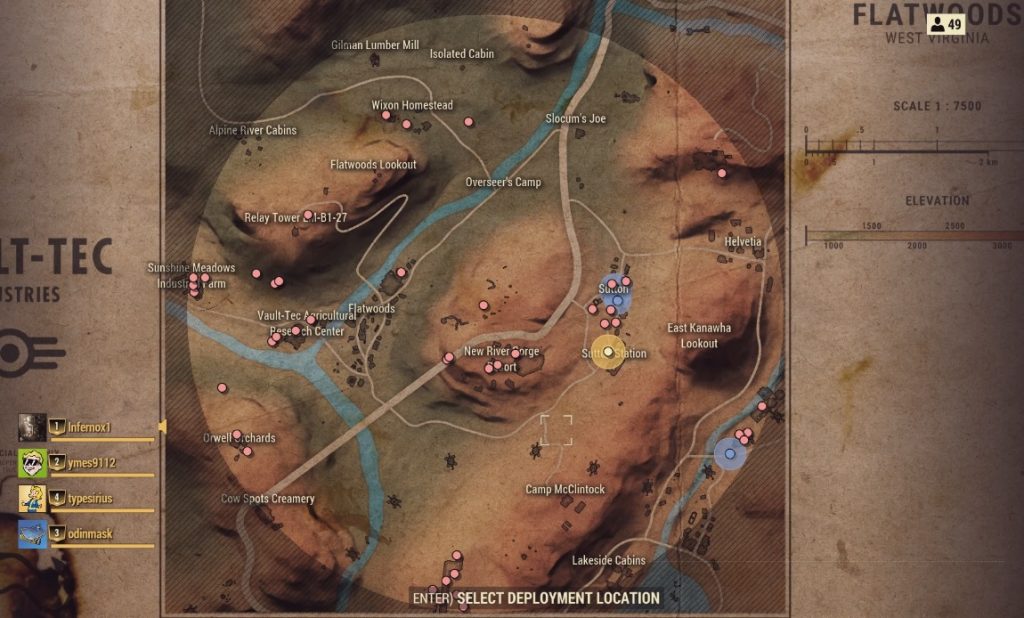 Once the game countdown has completed, you are presented with a map of the area and, like in Ring of Elysium, you and your squad members need to choose your starting location. You only have 10 seconds to do this before it locks in your decision, and then you can see where everyone else will be starting. Once in game, you are initially invulnerable and invisible until you attack or interact with an object. If you have inadvertently chosen a super hot drop, this gives you the ability to stealth the heck out of there before being overwhelmed. I really like this feature so you don’t consistently get owned when you spawn. 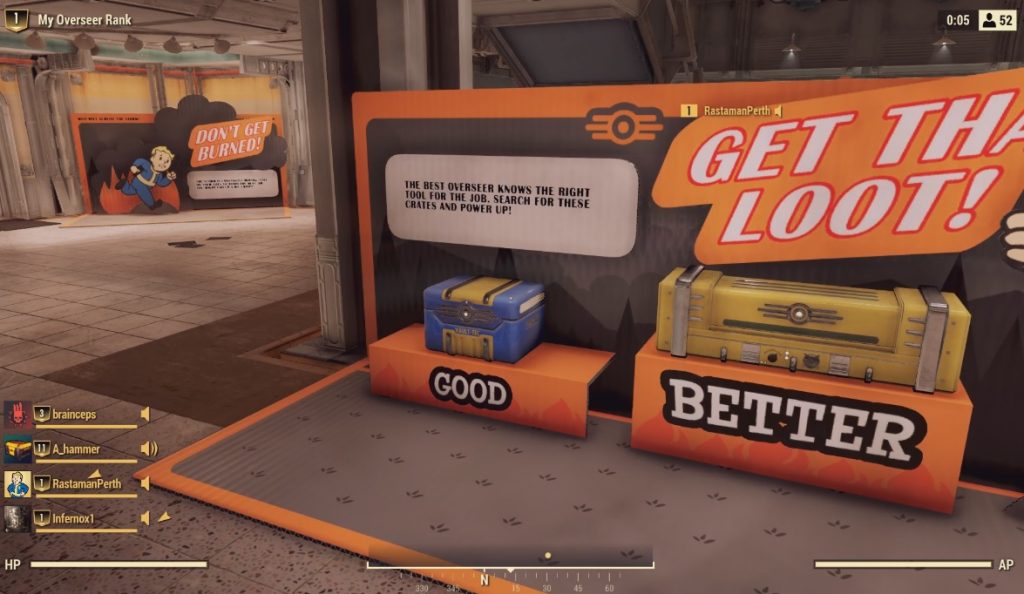 Once you start looting, you will be looking for small blue boxes (generally armour and chems), larger yellow crates (weapons and grenades) and looking and listening for the large orange vault-tec boxes which has a chance at some awesome items such as marine armour and a 50-cal machine gun. Players are able to build their CAMPS anywhere on the map for free which gives access to repair tables and shelter to hide. In addition to weapons, armour and ammo, you can also loot CAMP objects such as turrets and wall kits. Don’t worry, you can’t instantly build a 6-story building like in Fortnite, but having the ability to drop a turret when you know you have a squad behind you in a shrinking circle can work very much in your favour.

I have seen one end-zone have a camp set up, and one well-placed grenade took out a couple of the squad as the grenade blast was insulated inside the structure. To counter everyone setting up camp, you can find nuke codes in loot boxes where if your squad can collect four of these plus a nuke-case, you will gain the ability to drop a mini-nuke in the play zone, destroying anything in the nuke area instantly. I haven’t seen this happen yet and the most I’ve found in a game is three nuke codes. Will be cool to see this in effect in the later smaller zones. 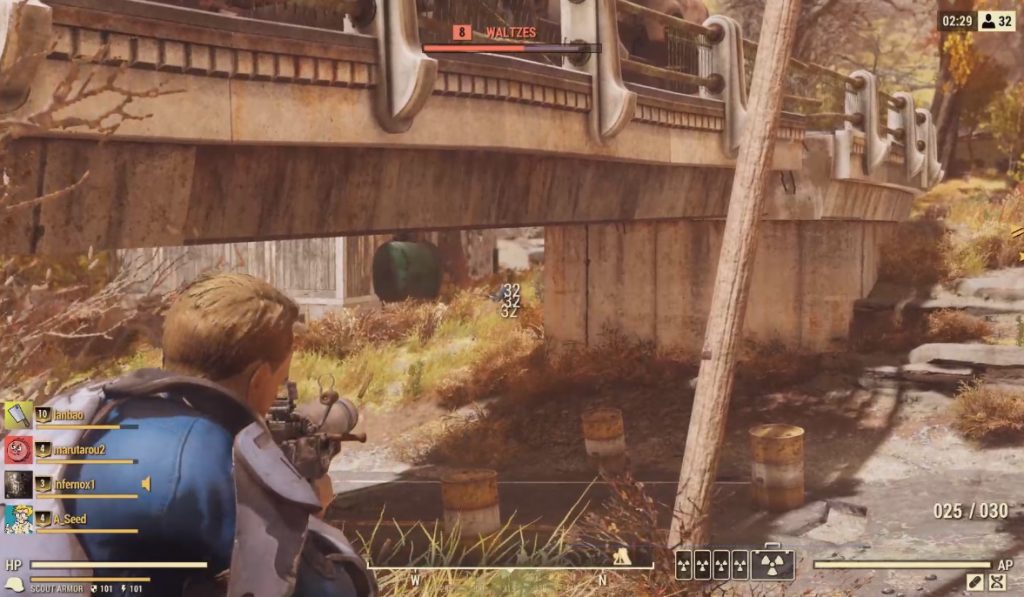 When you shoot at an enemy you will see damage numbers which helps you know whether you hit them or not. In my early games I was shooting wildly thinking I was hitting but I was completely missing them, so the numbers help to give you confidence of the damage you’re doing. I also sometimes just shot someone as they ran around a corner only doing 9 damage, so you do need to make sure you’re hitting their main body sections to do the best damage. There are suits of power armour that can be found but these are very loud to use, so can give away your position easily. You can also hack terminals and unlock safes to find better items, so there are always opportunities to find some strong items to help your squad, providing you get to them first. So far the locations of all these lootable boxes/chests are in fixed locations, so map knowledge plays a big part in the early game to get your hands on the good loot. 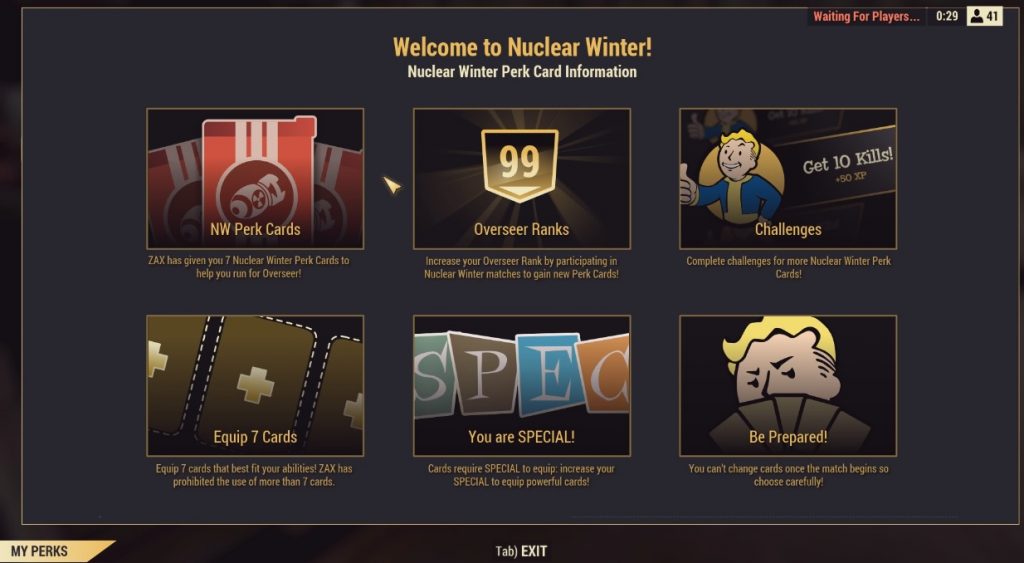 At the end of each match you are rewarded with Overseer XP based on actions you performed in the match as well as Perk card packs when you level up. You can gain XP from the time you survived, players downed and killed, AI monster kills (monster loot can give you powerful stimpacks and other items), nukes launched and revives, to name a few. The perk cards can only be used in Nuclear Winter and are unique to the game mode. For example, one of the default perk cards is lockpicking which means you have unlimited lockpicks. Other cards can unlock more damage and accuracy using assault rifles and you can customise the cards depending on what SPECIAL ranks you have unlocked in Adventure mode. The cool thing though is you also earn Adventure Mode XP and Adventure Mode Caps which enhance your main Adventure Mode characters. I love this aspect as it gives you incentive to play more and more matches regardless of if you get killed straight away or manage a win. 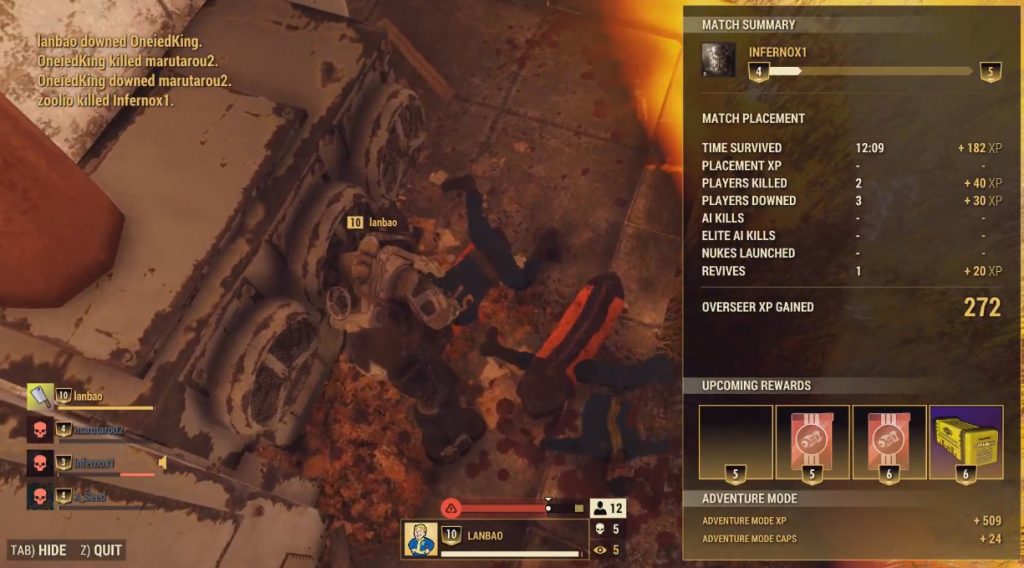 I’ve played for 3 hours so far and am really enjoying this new take on the battle royale genre. Some of the players I’ve grouped with have been fellow Aussies and have been really helpful in explaining the gameplay mechanics and tips for our teams. The use of stealth crouching and hiding in bushes works really well, and sometimes I’ve only seen other players because they started shooting at someone else, otherwise they were really well blended into the bushes. The only issue I’ve come across so far has been a sound bug with turrets. Not sure what triggers it but they leave a constant shooting sound where they were deployed. Some people in my squad could hear it but some also couldn’t hear it. Other than that though it runs super smooth and I’m looking forward to playing more this week!

Nuclear Winter is currently in a beta test period until June 17, and will release officially later this year. You can read more about Nuclear Winter over at the official website. Also keep an eye out for the Wastelanders expansion pack which will add NPCs and choice/consequence to conversations which should greatly improve the Fallout 76 experience.